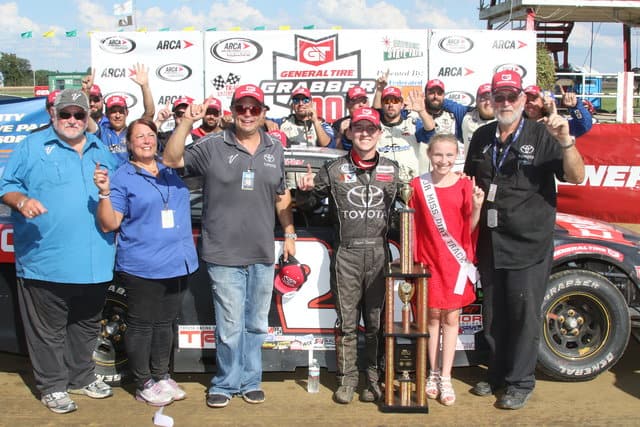 After an evening filled with messes and mayhem, dirt track star Logan Seavey came out on top in the Saturday Night Thunder at virtual Bristol Motor Speedway.

Seavey was caught up in an earlier incident that left him deep in the field. However, he saved the tires and his car to quietly work his way through traffic. Seavey kept his car out of trouble and tracked down Alex Labbe, Ty Majeski and Chase Cabre in the closing laps. Seavey passed Labbe for third and Majeski — who incurred some damage — for second. Then, on lap 139 Seavey overtook Cabre and held on for the lead.

Majeski fell to sixth, Justin Allgaier was seventh and pole winner Blake Koch finished eighth. Koch led the most laps but a later pit stop caused him to be further back in the pack. He unfortunately was involved in a major wreck on lap 85.

Things happen in a hurry at @BMSupdates, including the wrecks. ?@BlakeKochRacing, @KyleWeatherman and others are involved as we're past halfway in tonight's Saturday Night Thunder event!

Joey Gase was ninth and Jeb Burton, who was involved in several accidents throughout the night, was the final driver on the lead lap in 10th.

The night’s events featured drivers from the Xfinity Series, Gander RV & Outdoors Truck Series, ARCA Menards Series, PEAK Mexico Series, Pinty’s Series and Whelen Euro Series. It began with three heat races in which the top four moved on to the main event. Then two last-chance-qualifiers followed and the top six competitors from each 20-lap feature were added to the lineup.

There were several wrecks in these, including an inside-line pileup just before the start of the second LCQ. Another bizarre moment occurred when Myatt Snider, who drove around for much of the first LCQ with his hood up on the windshield, moved on to the main race.

All those races seemed to foretell what would occur in the 150-lap feature event.

There was a total of nine cautions in the main race. Nearly a third of the race was run under yellow flag conditions. After the final caution period iRacing officials had the cars to restart single file, and the race remained green the rest of the way.

Trouble started right on the first lap where Majeski, Brandon Brown and several others tangled up. However, the race stayed green until lap 24 where Jeb Burton slammed into Ruben Garcia.

Much of the field pitted during that caution and cold tires came into play on the next restart.

It's the BIG ONE at @BMSupdates! ?

Cautions breed cautions … even in the virtual world.

Several more wrecks ensued, including the Koch and Weatherman pileup. The race became more about survival and the strongest held on at the end, except for this crash after the checkered flag.

And @Logan_Seavey wins! Great action flag to flag. And after the flag. #SaturdayNightThunder #NASCAR #iRacing pic.twitter.com/3K7jwgnQqm

In a main 150-lap event that consisted of just 24 cars, it could be an indication of what’s to come for Sunday’s (April 4) Food City Showdown at virtual Bristol Motor Speedway. The race will air at 1 p.m. ET on FOX in select markets and simulcast on Fox Sports 1 and the Fox Sports App.