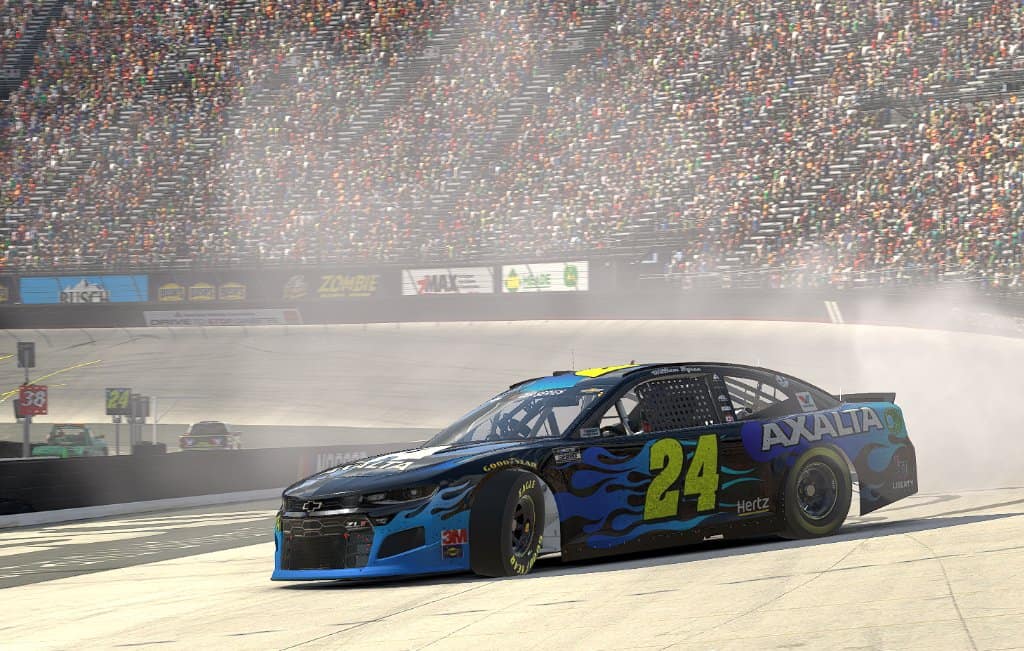 iRacing veteran William Bryon put on a commanding performance at the virtual Bristol Motor Speedway (April 5). Byron, who led a total of 116 of the 150 laps contested, retook the lead from Chris Buescher on lap 109 and cruised away from John Hunter Nemechek to claim his first win in the eNASCAR iRacing Pro Invitational Series. The win was Byron’s 309th career iRacing victory.

Byron was largely uncontested for the lead throughout the day despite brief challenges from Nemechek and Christopher Bell. Despite varying pit strategies employed by Buescher and others when the No. 24 pitted for tires on lap 73, Byron easily snaked his way back to the lead on lap 108.

While Byron, Buescher and Landon Cassill were the only leaders of the event, attrition was the name of the game for the majority of the field. Green flag racing was hard to come by, as the longest stretch of green flag racing failed to reach even 10 laps, thanks in part to double-digit caution flags that flew throughout the event.

Despite being involved in two of those incidents, last week’s winner Timmy Hill came home third just in front of Homestead winner Denny Hamlin. Fifth-place finisher Matt DiBenedetto used pit strategy to scamper up the leaderboard on fresh tires late in the going.

Texas runner up Ryan Preece along with NBC Sports personality Parker Kligerman rebounded to sixth and seventh place respectively after being collected in several accidents. Tyler Reddick, Garrett Smithley and Michael McDowell rounded out the top 10.

Byron and Nemechek started from the front row after winning their 50 lap heat races, a new twist for the Pro Invitational Series this week. Byron got the early jump in the feature, but the pace was quickly slowed by a lap 1 caution involving Preece and others. Despite the stops and starts, Nemechek managed to keep pace throughout the event.

Even in a virtual setting, short track tempers were abundant at the world’s fastest virtual half mile. Clint Bowyer and Bubba Wallace got into it on lap 11, which brought out the second caution flag of the day. Wallace ended up voluntarily leaving the race shortly afterward in frustration.

I ruined so many peoples day by quiting..a video game..

For the second straight week, Daniel Suarez was involved in a controversial incident. Both he and Kyle Larson were parked by iRacing for deliberately wrecking each other under both green and yellow flag conditions. The tempers continued on social media.

I was waiting for @iRacing to get him disqualified like i was last weekend in 5 seconds, but they never did… and by the way our “racing incident” was him pushing me to the apron… if this was real life my amigo would get his but kicked ???‍♂️ https://t.co/2Lyj7Xf53j

A massive crash involving Cassill, Jimmie Johnson, and others late proved pivotal as Byron easily got by Buescher on the ensuing restart. While Byron cruised away, passing proved difficult for the rest of the field as contenders Nemechek, Smithley, Hill struggled to get past cars on older tires.

A total of six cars failed to finish the event after being involved in incidents.

While this isn’t real life, this is still an opportunity for drivers to build they brand. Timmy Hill, Garrett Smithley, and others are adding fans. If Bubba Wallace is alienating sponsors during this time… Landon Cassill is more than capable of piloting the 43. I firmly believe Cassill is better than a full fourth of the field and on par with half. The 43 is only on par with Front Row Motorsports and German Racing these days, but it’s still a ride you can battle for top 10’s and for top 20’s routinely. I like Bubba Wallace, but this is no different than how one conducts themselves at sponsor events, drivers intros, or interviews. Maybe Landon can translate this to sponsorship for the 89 and they can start running full races.