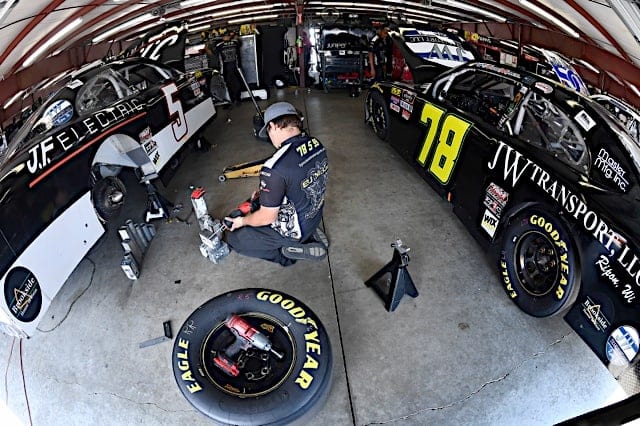 Many NASCAR teams shut down upon returning from Atlanta Motor Speedway last month due to the coronavirus pandemic. But at least one NASCAR Xfinity Series team based in North Carolina was at work until last Monday (March 30): BJ McLeod Motorsports.

McLeod told Frontstretch that his team — made up of many subcontractors and never having a definitive number of total employees — had worked extended hours, by choice, since the Atlanta call-off on March 13. That was until last Monday, when North Carolina Governor Roy Cooper implemented a stay-at-home order.

And though McLeod and his wife Jessica have a plethora of business knowledge — once owning a construction company before entering the team-ownership landscape in NASCAR — he’s never seen anything have an impact on his company more than what COVID-19 is doing to his race team.

Online therapy services, like www.betterhelp.com, are providing insight and advice on how to adjust to working from home and how to manage anxiety from COVID-19. Check out their website today to learn more.

“We all plan for offseasons, but we’ve never planned for one in April,” McLeod said. “It’s definitely a different deal to get through. Fortunately, my wife and I have been in business a long time, and we plan for stuff to not go right. We came back from Atlanta and went to work.

“It’s because my wife and I have been in business for 15, 20 years and we’re used to getting hit with stuff. It’s definitely something that you can’t plan for, but fortunately, we’ve seen some bad times — nothing like this — and we were ready for it.”

McLeod added his race team built two new race cars in the 17-day span, adding to its stable of current speedway and road course chassis. The second car was complete and ready to go the last business day before the shutdown. The team put its Texas Motor Speedway gears in the chassis, but never fired the car up. Fortunately, McLeod didn’t have to lay off any employees.

From a financial standpoint, all race teams will be affected with no current cash-flow entering their doors. And with the next Xfinity race not scheduled until May 23, it’s going to test different teams’ limits on what they can and cannot do work-wise once the state shutdown is lifted.

“The longer it goes, the harder it is to overcome,” McLeod said. “Fortunately, we’re in a sport where our sanctioning body is working really hard to make sure we get all of those races in. If we get all of the races in, it’s not that big of a hurt, honestly. If you run the same amount of races you’re supposed to run by the end of the calendar year, you’re going to be at the same budget. It’s just going to be a matter of right now, you’re having to front money that normally you wouldn’t have to front.”

But with no cash coming in for upwards of 10 weeks — dating back to Phoenix Raceway, March 7 (though teams don’t get paid from NASCAR until the following Friday) — and only getting four race-winnings paychecks in six months, it stings for McLeod’s team financially.

“We’re basically looking at two offseasons with only a four-week race span in the middle of it instead of a 33-race span,” McLeod stated. “It’s a big difference cash flow-wise. But when you operate with businesses that it takes to run in the Xfinity Series, you have to plan a certain amount of cash flow to be able to keep going.”

Though not being able to put an exact number to it, McLeod estimates the team runs 50% off the weekly race purse and 50% off sponsorship. That amount of money allots the team to run scuffed tires on a weekly basis.

“You couldn’t make it without those winnings,” McLeod said. “Right now, it’s too tough to secure sponsorship dollars for the amount it takes to run these teams per car. It’s a big part of surviving, and it’s definitely difficult to do without it.”

The way each team is affected will be different from one another due to respective team budgets. Say one of the Xfinity goliaths spends $200,000 to operate on a weekend and a smaller team brings $75,000 to the table, that money still comes from somewhere in order to participate.

McLeod, not knowing how long his team can go with no cash flow, believes his team is much more prepared for this than it would have been in 2016, the team’s first year of existence.

“It’s hard to know who can make it the longest or how long can we make it,” McLeod said. “I think you just plan to make it as long as you can and hope for the best. This is a point where we’re already in a bad enough time that you can’t really sit down and put an exact number or an exact date on when you run out of money. I know that sounds bad business-sense-wise, but we’re in a spot that nobody alive has ever seen something like this.

“If this happened in our beginning year, I don’t know if we would have made it. It would have been very, very difficult.”

In the past, McLeod has stated how the team has always had a five-year plan. On the competition side, it’s seemed to pay off, with this being his fifth season as an Xfinity team owner.

Through the opening four races of the 2020 season, Vinnie Miller has a pair of top-15 finishes at Daytona International Speedway and Auto Club Speedway and sits 18th in the championship standings, the highest he’s ever been in his career. In 2019, his first year with BJMM, Miller had one top-15 result all season.

On the flip side, Matt Mills has yet to get out of the gate, sitting 30th in points. Both he and JJ Yeley, driving the No. 99 car, failed to qualify for McLeod’s team at Phoenix, meaning the team is essentially one week behind every other team financially.

“That does hurt us a little bit more, but I think we’re just in a spot now where I look at the big picture and I know where we’re at speed-wise with our cars,” McLeod said. “I know two of them went home at Phoenix, but we also know exactly what caused it, and I’m not concerned for the future.”

Josh Bilicki and Mason Massey both saw seat time in the No. 99 car through the first month of the season. Jario Avila Jr., among other drivers, will also race for the team later in the year.

But Miller’s standout performances have made for some lofty goals from the Florida native, as McLeod hopes the team can do something its never done before.

“I’m looking for five top 15s in downforce races, not road courses, not speedways, because those, you could finish fifth or wreck on the first lap,” McLeod added. “That would be on par with where we wanted to be in five years.”

To date, BJMM has a best effort of two top 15s in a single season on downforce racetracks, coming in 2017.

With additional downtime being spent at home, it’s been an adjustment for McLeod, who says he’s been working constantly since he was an adolescent (his first job was changing microjets to water trees in Florida).

“I’ve never had this much time on my hands,” McLeod said. “I’ve literally worked since I was 12 years old. I worked for my parents and got my first paycheck when I was 12. I don’t know how to sit at home, I just don’t.”

In the grand scheme of things, McLeod constantly thinks about the real world and the millions, if not billions of people that are being affected due to COVID-19. Tying it back to racing, he knows the company’s performance might be hindered in 2020, but his team won’t give up.

“The coronavirus pandemic is going to hurt advancing the team for the rest of the year, because a lot of it is going to be survival from here on out,” he added. We’ve got a good group of people, and we’ve prepped well, so I feel good about us being able to get through it.

“As a team, we’re going to survive. We will. We’re going to work hard to do everything we can the rest of the year to run as well as possible and secure the team for years to come.”