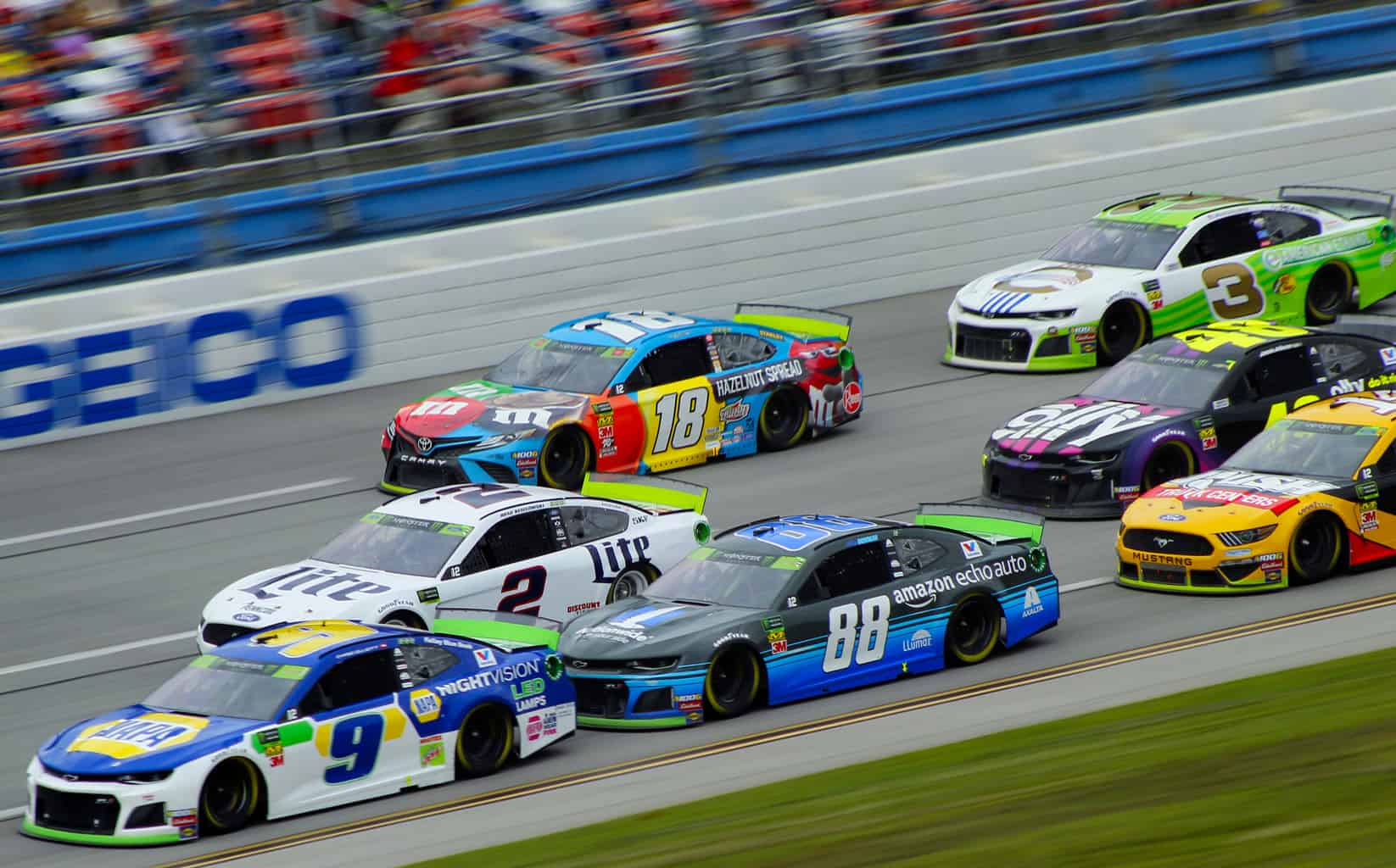 I’ve got to commend NASCAR for opting to put even iRacing on hold to honor the traditional Easter off weekend this Sunday (April 12). I say that both from a tradition standpoint, as well as a personal relief that the racing community opted for normalcy instead of a continued push to substantiate virtual reality.

Having said that, Easter Sunday was still a Sunday for me, and that meant it was time for my weekly joyride behind the wheel of my Mustang GT. Being a car aficionado with a 52-week-a-year gig writing about motorsports, such a routine shouldn’t surprise anyone. Besides, it’s not like I’m the only motorsports writer finding some solace behind the wheel.

Took a drive. The sunset view from outside Gate 26 pic.twitter.com/YTLzhtxgvS

What I found surprising this weekend, however, were a series of conversations I had with family and friends that seldom discuss anything automotive, unless they’re asking me for advice on purchasing their next vehicle. Part of that was brought on by said family and friends being a captive audience for a radio hit, taking time Friday to talk racing in the Commonwealth of Virginia with longtime Frontstretch supporter Ed Lane. (For our readers in southern Virginia, check out his Fast Lane show when you can; it’s well worth a listen).

https://t.co/adM7wKRTUg Ed talks how the shutdown is hurting the farm leagues the most, asks @DaveWallsWSET when we can expect to see packed stadiums again, and asks @BrianDavisKeith of https://t.co/xcWjVzTaju if IRacing will last past the shutdown.

Whatever their motivation, however, the anecdotes were intriguing, as they got me thinking about post-COVID America seeing a resurgence in… hitting the road in an automobile?

Let’s start with my youngest sister. She’s an 18-year-old that, prior to the COVID-19 lockdown, was among the majority of her peers in holding her driver’s license as more an annoyance than a rite of passage, actively avoiding driving wherever possible. Now, her twice a week jaunts around the neighborhood in her twice-wrecked Suburban with nearly 300,000 miles on it are the highlight of her week.

Then there’s my granddad, who, having stayed asymptomatic for three weeks, can now socialize with those of us in our quarantine bubble nearby. He and I headed out to the woods this Saturday to take a hike off-trail and away from the masses. Recalling his past travels as we swapped stories, he made a point to bring up his sympathies both for those stuck on cruise ships at sea during this pandemic as well as those forced to fly on large passenger aircraft. Each method of transportation represents high-density, jam-packed forms of transit that have proven susceptible to the current disease gripping the globe. They also face a very uncertain future in the face of international travel restrictions, reduced discretionary income and the same type of pause from travelers that, in poll after poll, are proving weary of going back to stadiums for sporting events for the near future. Seems like a self-contained, four-wheeled auto with climate control, volume control and retractable windows is sounding a lot more attractive….

Is was a smallish sample, but interesting results from a Seton Hall sports poll conducted this week (we have our own poll at bottom of post)https://t.co/1PQJ2HvoK1

The anecdotes go beyond relatives. My college roommate, who is fortunately home and symptom-free after following State Department guidance to return to the U.S. from his (former) full-time job in China, has spoken as romantically as I of taking a cross-country road trip as soon as it’s safe to do so. While I look forward to that trip, it’s a shocking change of perspective for a guy that as long as I’ve known him has considered only international travel as travel worth nothing.

The world, it seems, has suddenly gotten smaller for many.

Not for homeowners, though. Scanning a group chat involving multiple members of my former soccer team from my days living in the Washington, D.C. metroplex, those owning townhouses were already looking into purchasing single-family homes further removed from population density. Many of them are anticipating the projected second wave of COVID-19 in the fall. Concerns about a longer commute for the same individuals have all but evaporated, not just because of social distancing and remote working requirements, but also because driving for them is likely going to be a necessity. After all, mass transit in the D.C. area has utterly failed those that don’t own their own cars. It’s an undisputed fact regardless of whether one falls on the side of pundits that calls its reduced service as a needed safety measure or evidence of inept management drunk on guaranteed funding with no strings attached.

What does all of this have to do about racing? Let’s get there. While anecdotal (I’m Frontstretch’s senior commentator, not data analyst, after all), that’s no shortage of people in my own immediate orbit whose perspective on transit and travel has already been radically altered by the COVID pandemic. And it doesn’t take a lot of foresight to see that, if any of those perspectives are a trend, that both ownership and prioritization of ownership of a passenger vehicle could be primed for a rapid resurgence in this country. Personal freedom in this quarantined world, all of a sudden, is now arguably more hinged on owning a motor vehicle than at any point since the peak of car culture last century. That bygone era, by the way, just happened to correspond with NASCAR’s primacy both as a motorsport of national interest and a field for automotive manufacturers to do battle.

Regardless of when relief from COVID-19 comes, the world has certainly gotten smaller. The automobile stands to become (more) relevant again in America. That’s an opportunity for NASCAR in its current form, especially given that the eventual move to the Gen-7 racecar will further take big-league stock car racing down the pony car road. The new chassis sports a six-speed transmission, longer hood and proportions similar to the Camaro and Mustang models being raced by longtime American manufacturers General Motors and Ford Motor Company. Given that both Ford and GM have largely, if not entirely, killed off their lines of passenger cars, the decision to campaign the Camaro and Mustang despite a long aversion from racing coupes at the highest level of stock car racing was born of necessity, though it makes perfect sense. Why not run powerful, sexy muscle cars at the pinnacle of American motorsports?

Those powerful, sexy muscle cars are poised to stand out even more on dealer lots that now are littered with countless amoeba-like crossover SUVs that all look alike. Just as the absence of stock car racing is making the hearts of race fans grow fonder (and would even more if people would turn the damn video games off), the absence of the passenger car could just as easily return some mystique and aura to the muscle car… right as countless Americans may be warming back up to the notion of owning their own motor vehicle.

It’s been a massive shift in recent years that’s led the automobile to diminish as much as it has in American culture. But the current pandemic just may prove massive enough to turn that tide.

Somehow, I don’t think the chips are going to fall exactly like you envision them.

Nor do I.For there to be a resurgence of the automobile there have to be destinations. Which runs counter to the very reasons you have given.
At best I think a return to the pre pandemic world could happen. Oh I expect a brief burst brought on by the euphoria of a release from the lockdown. But I don’t believe it will last very long. If anything the other side of this may just push us further down the path we were already treading.

My guess is that peoples’ willingness to go anywhere with large numbers of other people, will be greatly diminished until there is vaccine. More likely everything will just slug along until that day and then we will be able to assess how this has affected the larger society. In the meantime, people will be living day to day, many with their budgets slashed. So many won’t have the means or desire to travel anywhere.

Bryan may be right about a bump in people wanting to own their own cars as a result of this, given how dangerous being crammed onto public transportation or even Uber where many people come and go. Having a car definitely gives a person greater control in limiting their contact with others, as does living outside major cities. There is no doubt that living in a dense city and using public transportation greatly increases the odds of contracting the virus (as well as most other contagions).

yet people will go where the jobs are. How will the get there is the question.