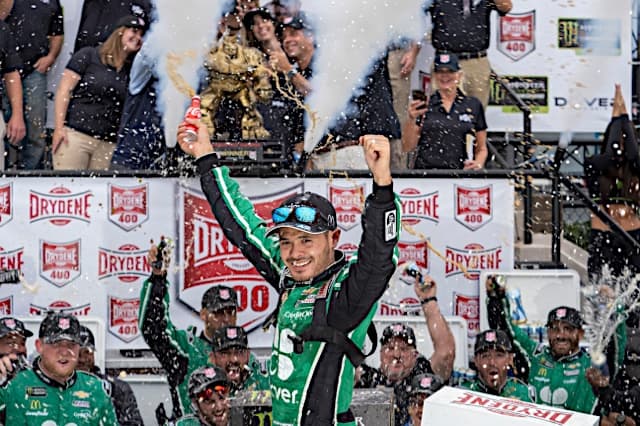 Kyle Larson has been released by Chip Ganassi Racing in the NASCAR Cup Series after Sunday’s incident on iRacing in which Larson used a racial slur.

In a statement tweeted out by the team Tuesday morning, CGR outlined its reasoning for parting ways with the driver.

“After much consideration, Chip Ganassi Racing has determined that it will end its relationship with driver Kyle Larson,” the statement read. “As we said before, the comments that Kyle made were both offensive and unacceptable especially given the values of our organization.

“As we continue to evaluate the situation with all the relevant parties, it became obvious that this was the only appropriate course of action to take.”

The partnership was terminated as a part of the fallout from the incident, on the heels of the team indefinitely suspending Larson and the NASCAR sanctioning body doing the same.

Larson has won six races with the team in Cup competition, the most recent at Dover International Speedway in fall 2019. Since his rookie season in Cup in 2014, he has compiled 56 top-five finishes, 101 top 10s and eight poles.

He also scored nine wins with the team in the Xfinity Series, all coming at different tracks.

In addition to the original suspensions, Chevrolet put its relationship with the driver on hold. Additionally, sponsors Credit One Bank and McDonald’s terminated their associations with Larson.

Larson has not yet made a statement regarding his release from CGR.

No information has yet been released on Larson’s potential replacement.

KEITH: THE FUTURE OF iRACING AFTER LARSON’S FIRING

BOWLES: ONE WORD, ONE NASCAR CAREER DESTROYED FOR LARSON – WHAT EFFECT WILL THAT HAVE ON THE SPORT?

There is no way back for Kyle. He committed the ultimate sin, he has scared off sponsors. Hope he saved/invested a lot of the money he made over the last decade. He will still be able to race on dirt tracks but will forever be hindered by lack of sponsorship opportunities. And rightly so, corporate America doesn’t like to take risks on spokesmen they can’t be assured won’t embarrass them. I was never a fan (nor a detractor) so I won’t miss him. His legacy will be a cautionary tale for future athletes.

Matt
Reply to  Bill B

I seem to recall Larson saying his plan was he’d be a full.time World of Outlaw driver before he was 40. I guess he presumed that would be his call.

On the plus side, he won’t be forced to participate in any of those stupid arcade races anymore…

There is a world of difference between satire and reality. Kyle was not using satire.

What a shame. I completely understand the consequences of his actions, and while I don’t believe Kyle Larson to be a racist person, that doesn’t negate the fact he should’ve known better. Like Bill B. said, I hope he invested wisely and is able to live a productive and healthy life moving forward, in what ever capacity that may be? This is a true reminder that our actions have consequences, no matter how big or small.

Me and my buddies will never watch NASCAR again. Don’t forget where they started

After some time, Kyle could find is way back with the right team and sponsor. Kurt Busch worked his way back. I suspect Ross Chastain will replace him if that can be worked out with Roush and Kaulig. Otherwise, Landon Cassill could wheel the 42 for the rest of the year. Daniel Hemric might be an option, too, but I have to suspect Chastain is the first pick. That said, I’ll buy $100 of 42 apparel if they pick up Garrett Smithley or Joey Gase to spite Kyle Busch (and have Smithley or Gase on that apparel).

Chip has made an offer to Willie T Ribbs to come out of retirement.

I guess most have never made a mistake before,plus they all can walk on water.The PC police are now working at 200%

Maybe this is just the latest in a series of events where we see that the public, stage managed persona of an individual isnt the reality.