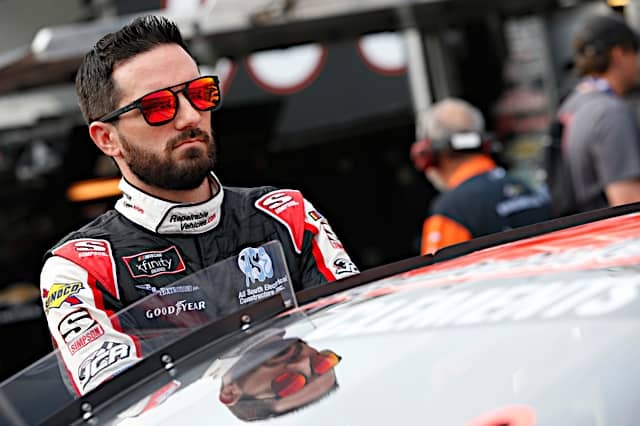 Kyle Larson screwed up — big time, and there are really no excuses. But amidst what has undoubtedly been the worst week, at least professionally, of the young driver’s life, there is hope for a future in racing.

Larson isn’t necessarily done: NASCAR will likely reinstate him quickly once he completes whatever program they lay out for him to earn his redemption. His team has decided to move on, but Larson is a free agent, and he can sign on anywhere that will have him, though he might miss whatever is eventually run in the 2020 season.  That’s pretty much the definition of a second chance.

History is on his side, not just in NASCAR (more on that below), but across major sports in general. There are more than a few examples of athletes making similar poor choices, some arguably much worse than Larson’s, and coming out of it okay in the long run.

Yes, the damage to Larson’s reputation is done, and it’s quite possibly permanent. But he can salvage his career. It’s happened before.

It’s Game 3 of the 2017 World Series between the Houston Astros and Los Angeles Dodgers. Houston first baseman Yuli Gurriel takes Dodgers pitcher Yu Darvish deep to open the scoring in the bottom of the second inning, returns to the dugout and celebrates with his teammates.

Except when Gurriel sat back down on the bench, he made a racial gesture caught by the television cameras, clearly mocking Darvish’s Japanese heritage. Additionally, Gurriel clearly mouthed a derogatory term against those of Chinese heritage.

After apologizing, Gurriel was suspended for the first five games of the following season but was allowed to play out the rest of the Series. When he stepped up to the plate against Darvish again in Game 7, he tipped his helmet to Darvish as another apology, but his suspension for the next season still stood.

Gurriel’s career returned to normal after the incident and suspension, playing in most of the Astros’ games in the following two seasons and remaining the team’s go-to first baseman. Additionally, Gurriel won two American League Player of the Week Awards  and AL Player of the Month honors over those two years, hitting 44 total home runs. –Adam Cheek

In 1999, Atlanta Braves pitcher John Rocker came under fire for a derogatory tirade during an interview. When asked if he would ever play for the New York Yankees or New York Mets, Rocker responded with this bomb: “I’d retire first. It’s the most hectic, nerve-wracking city. Imagine having to take the seven trains to the ballpark looking like you’re riding through Beirut next to some kid with purple hair, next to some q—r with AIDS, right next to some dude who just got out of jail for the fourth time, right next to some 20-year-old mom with four kids. It’s depressing… The biggest thing I don’t like about New York are the foreigners. You can walk an entire block in Times Square and not hear anybody speaking English. Asians and Koreans and Vietnamese. Indians and Russians and Spanish people and everything up there. How the hell did they get in this country?”

Rocker was suspended for spring training as well as 28 regular season games. The penalty was reduced to 14 games on appeal.

The remarkable thing about Rocker is the fact that he never expressed remorse for his comments. His baseball career wasn’t really affected by his behavior, longterm, though he demonstrated time and time again that the remarks he made in that interview weren’t his only prejudiced beliefs. His on-field performance faltered during the early 2000s, and it was his lack of productivity that became his undoing, along with continued homophobic and xenophobic commentary.

Rocker was traded a couple times in the years that followed, and after being released in 2003 by the Tampa Bay Rays, never again played in a major league game. He appeared on a couple of reality television shows, including Survivor, after his retirement, and in 2011, admitted that he had used steroids during his baseball career. –Frank Velat

At least with Larson, this is the one and only such incident on his resume. For NFL guard Richie Incognito, it’s one horrible incident after the next, and he continues to get opportunities.

According to an investigation done by the NFL, Incognito bullied former teammate Jonathan Martin and an assistant trainer with the Miami Dolphins in 2013, used racist and homophobic slurs and threatened to kill Martin. The Dolphins released Incognito, the NFL suspended him and he sat out six weeks of the 2013 season and all of the 2014 season. During that time, he voluntarily got help from a treatment facility.

In 2015, the Buffalo Bills, a team he had previously been with, gave Incognito a second chance. He thrived on the team, getting selected for three straight Pro Bowls, and was rewarded with a fat contract. But Incognito was again accused by another player of using racial slurs, though granted, there’s no proof. He retired from football, then had a change of heart, followed by a nasty falling out with the Bills.

Incognito didn’t play in 2018. He had an altercation at a gym and was arrested that fall for threatening to shoot up a funeral home. But when the 2019 season came around, the now-Las Vegas Raiders signed Incognito and the NFL gave him a slap-on-the-wrist two-game suspension.

Despite multiple problems, Incognito continues to have a successful NFL career. He’s still on the Raiders’ roster and was recently awarded another big payday. –Michael Massie

During the 2018 Major League Baseball All-Star Game, Josh Hader’s Twitter history was brought to the limelight, and it wasn’t pretty. Tweets from when he was 17 years old surfaced soon after his unpleasant outing in the game, including one that said “I hate gay people.” Other tweets also included racial slurs. The Milwaukee Brewers closer apologized after the game, and the next day MLB issued a statement and ordered him to undergo sensitivity training. He also participated in the league’s diversity and inclusion initiatives. It didn’t seem to affect the rest of his career, as he won both 2018 and 2019’s National League Reliever of the Year award.

Finally, here’s what happened in Larson’s own sport. Jeremy Clements was suspended indefinitely for using the same word Larson used during an interview with MTV reporter Andy Beckerman in 2013. Unlike Larson, though, that quote never made it to the public domain. It wasn’t until NASCAR found out it had been made at all that Clements, driving for his own NASCAR Xfinity Series team, that it came to light. That’s a bit different from Larson, who said it on the open airwaves.

But when it came down to it, Clements’ suspension lasted until he completed the sensitivity training course NASCAR laid out … all of two races. That bodes well for Larson, who has seemed truly remorseful.

The obvious difference is that Clements drove for his own team and didn’t lose his ride. He was able to retain sponsors (though his backers were not the high-profile corporations that Larson was racing for) and finished the season 16th in driver points. Clements has continued to race in the Xfinity Series, finishing in the top 15 in points every year since 2014, posting solid finishes for his small team. He’s no worse off than before the incident, though it will dog him — it’s prominent in his Wikipedia biography and will be dredged up with a search of Clements’ name. All in all, this is the best barometer of what Larson can expect. – Amy Henderson

NA$CAR will reinstate Kyle, that’s kind of a given, his problem will be finding sponsorship. Kyle is always going to have an asterisk next to his name as “that racist guy” and a major corporation isn’t going to want that associated with their brand(s). Maybe with time, he’ll get a chance with an upper tier team but that’s probably not going to happen any time soon.

The biggest problem for Larson is that unlike team sports, in NASCAR the driver is the focus of whole team that is dependent on corporate sponsorship. NASCAR will reinstate him, but he’s radioactive in corporate America right now. Considering dirt is his first love, I see him going there and staying there. I wonder if he will have the desire in 1 or 2 years to even want to return to NASCAR.

It’s more of an indictment on the thin skinned & candied ass nature of the pc movement. In the end I really don’t care one way or the other about Larson, McDonalds, CaptialOne, etc.

The one word I have seen about the Clements situation back 7 years ago that was not included here was “alleged”. Based on what I read and remember from Clements situation was it was taken at the word of the reporter person and seems to have little fact to have backed it up, at least publicly provided. Larson’s deal might just end his Cup career since he did not seem to have his heart in it much the last couple of years anyway.
Bummer because my son was a fan of his.