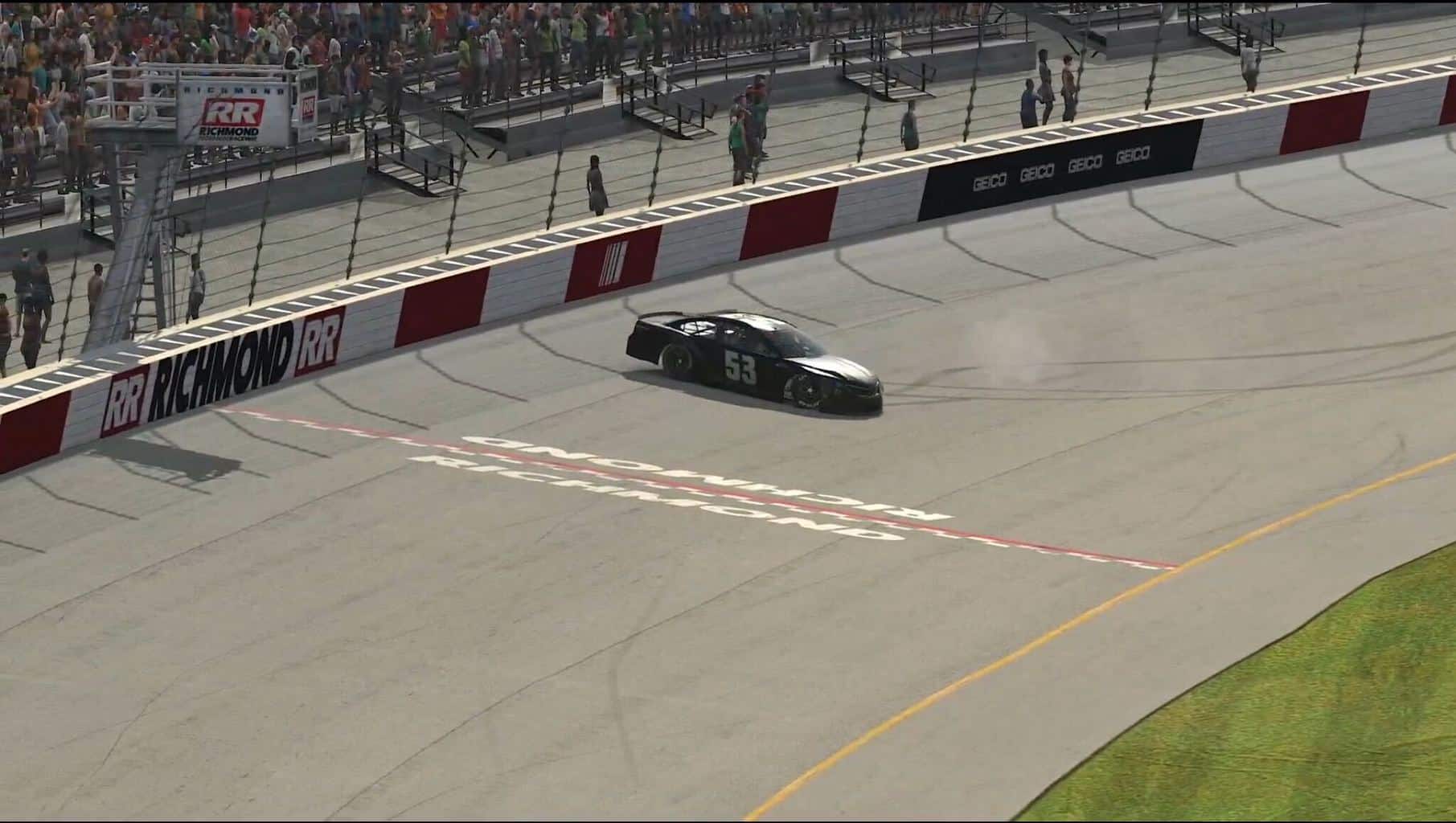 In a race filled with spins, wrecks, and The Big One, Ryan Luza earned his third consecutive eNASCAR Coca-Cola iRacing Series victory of the year at the virtual Richmond Raceway.

Luza surged forward after starting the race back in the pack. His fast car and quick pit stops set him ahead about halfway through the event.

However, about 50 laps later when he and most of the field pitted, Jarl Teien stayed out on a strategy call. Luza would eventually retake the lead late in the race, enduring two overtimes for his second win in a row at Richmond.

“It wasn’t easy at all, I can’t believe this one,” Luza said in his post-race interview. “I was gonna be happy with a top 20 and just not getting wrecked and made the right call: took two tires early, got up to like around 20th, and then we had four tires for the really really long run.

“Just was in the right spot at the right time. The car was obviously good, but without me getting as fortunate as I did, getting through lapped traffic, there’s no way I’d have made it up to third. I don’t know what the pit crew did on the stop to go from third to first but that’s what won the race for us.”

Luza also shared that he and his team practiced many hours in preparation for this event, and it was well worth it.

“We’ve put in so much work, we’ve tested probably 12-14 hours in the last 24 getting ready for this race, trying to find speed.

“We turned so so many laps and it is really paying off.”

Michael Conti edged out Nathan Lyon for second, while Bobby Zalenski and Zack Novak rounded out the top five.

As is often the case with short tracks, there were numerous cautions — 16 in fact. More than a third of the race was run under yellow flag conditions.

Many of these cautions came for single car spins (that often had a little help), including two incidents between Jeremy Allen and Garrett Lowe.

One that involved multiple cars came on lap 26 when Justin Bolton bounced off the wall and ended up tagging Caine Cook. Zalenski also spun with Cook.

More yellow flags flew over halfway through the race, but eventually there was a long green-flag run after lap 119. Luza led until lap 146, when Keegan Leahy was turned by Brian Schoenburg.

Then on the next restart, this happened:

Multiple cars are collected in this big crash at @RichmondRaceway! pic.twitter.com/tise4bqEFH

Turn 1 turned into calamity corner and collected several cars, including some really quick ones like Conti, Casey Kirwan and Christian Challiner. This set off another series of caution periods for the rest of the race.

One of the most notable was when Richmond Raceway eSports driver Jimmy Mullis checked up, spun and was clipped by Justin Bolton while sideways in the middle of the racetrack. Mullis had led 56 laps, but this wreck and another later left him with a 34th-place finish.

Four more yellow and two green-white-checkered flags would wave before Luza could claim the victory.

The series’ next race is at virtual Dover International Speedway on Tuesday, April 28 at 9:00 p.m. ET. The race will be streamed live on eNASCAR.com/live and other streaming options.