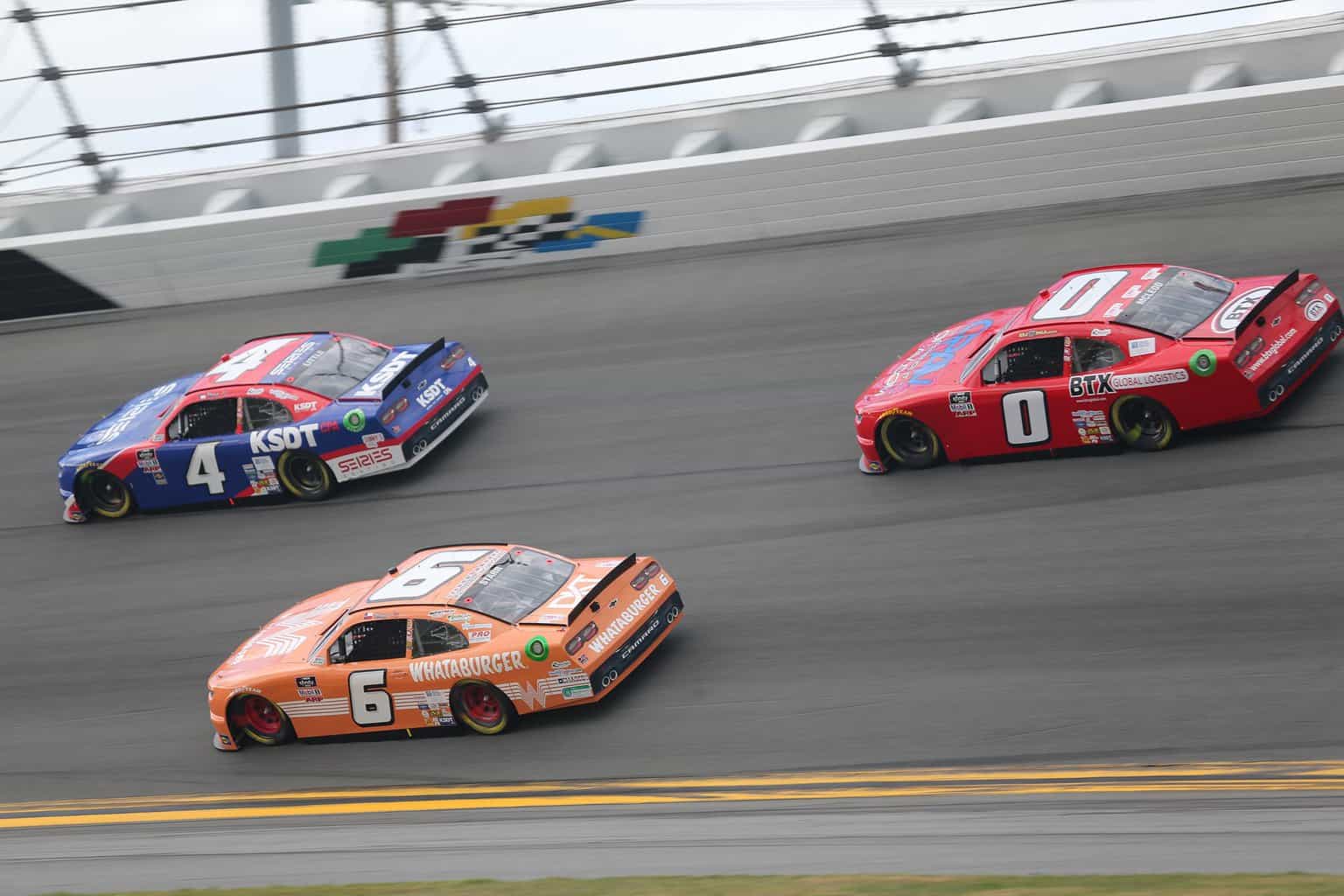 Johnny Davis, owner of JD Motorsports, has seen it all in his NASCAR career, dating back to the early 1980s, working with driver-owner James Harvey Hylton. That was until the 2020 coronavirus pandemic, which is something his team – and the sport – has never seen before.

It’s been just over a month since NASCAR called off the race weekend at Atlanta Motor Speedway (March 13) after teams arrived to the racetrack, gearing up for opening practice. Since then, the total number of cases of COVID-19 has skyrocketed, 43 of 50 states in the United States have implemented stay-at-home orders and many people have lost their jobs, filing for unemployment.

In the racing community, many teams have furloughed employees. JD Motorsports is no exception, as the team stopped working on March 17, at noon ET. Since then, the shop has gone dark, and Davis hopes all 27 employees will return to the Gaffney, S.C. race shop to work once the season resumes.

“It put everybody out of work at my place,” Davis revealed to Frontstretch. “We didn’t have enough capital funds to keep them employed. …We basically had to stop working to be able to have money in the bank to start backup for when we get through this.”

Being the team leader, Davis is who employees at JDM rely on to survive. Though he’s had to have some unsettling conversations with workers, he believes he’s doing everything he can to make sure his employees make it through the hiatus, even if they decide not to return to work.

“I have quite a few credit cards with some limits that we can use,” Davis added. “I’ve done some things for my employees, like, they couldn’t make a car payment, I paid that for them. I’ve bought some employees groceries on my credit cards, just trying to keep them going so they will want to come back. That’s just the kind of guy I am period, whether they come back or not.”

Davis admits he’s fortunate credit card companies have furloughed those payments for 90 days, meaning he has time to pay those companies back.

The Xfinity Series last saw action at Phoenix Raceway on March 7. It isn’t scheduled to see the racetrack again until May 23 at Charlotte Motor Speedway, meaning 11 weeks would have passed since the last event. The halfway point between the two events passed this week.

But in order to complete the full 33-race schedule, there will most definitely be multiple races in a given week. That, too, is a concern for Davis, knowing it has been a bleak season to date.

“My biggest concern when it does get rolling is with the talk of two races per week,” Davis said. “With as short-staffed as we are, we’re going to have to come up with some more people to make that happen or we’re going to be living on the road going from racetrack to racetrack when that happens.”

Confirming the team has 19 to 20 chassis ready to go back at the shop, one of Davis’ top struggles is finding the balance between not racing now and when the metaphorical red flag is lifted, knowing there’s going to be a ton of racing in a condensed amount of time.

“You’re hoping and praying all them boys come back and that you took good enough care of them with any needs they had and that they want to come back,” Davis said. “I feel like we do that during the season all year long that they don’t want to work somewhere else, because we can’t pay the dollars that some of them are capable of making and they continue to stay with me year after year.

“If some of them don’t come back, we’ll just have to figure out a way to make it work and get it done. We’re survivors, we’re hard workers and we’ll make it happen somehow.”

Meanwhile, the organization, four teams deep, is one of the competitive underfunded teams in the Xfinity garage. On average, Davis says the team races off approximately 60-75% of race winnings, with the rest being accommodated to sponsorship dollars.

But to bring four cars to the racetrack on a given weekend takes roughly $140,000-$180,000 for JDM. Divide that by four and each car runs off a minute amount of money compared to larger teams.

“No sponsorship dollars are coming in at this point and time,” Davis added. “When Atlanta was over, there was a couple of payments from different sponsors that paid, but it wasn’t a lot of money.

“Right now, there’s so many unknowns that you don’t know where to spend your money, other than you’ve got to be prepared to go whichever direction we need to in order to get this season in.”

With many companies struggling to survive because of the pandemic, Davis presumes it’s going to be harder than ever to attract sponsors. That hurts smaller teams even more.

Many of his past drivers have admitted whenever one of the JDM cars is painted red, Davis is spending some sort of money out of pocket to put that car on the track. To that, Davis uses the racer’s mentality, noting, “I love the sport and I love investing in it and I like seeing these kids get better and move on. …Yes, I’ve spent quite a bit of money that I’ve made in other avenues, and we’re hoping to recoup it one day, if we find the right sponsor and they can somehow pay me some of that back. But if it doesn’t, I don’t regret anything I’ve done.”

Regardless of the situation, Davis is committed to running four full-time cars, two by drivers Jesse Little and David Starr. BJ McLeod, Jeffrey Earnhardt, rookie Colby Howard, Robby Lyons, Mike Wallace, who is announced to drive one of the team cars at the inaugural road course race at Indianapolis Motor Speedway, among others will fill out the Nos. 0 and 15 cars.

But because the team could be working with a skeleton crew with a quick turnaround time, he may have to tell drivers to be cautious at a given racetrack.

“We’re basically in a position where we need to run all four cars,” Davis said. “With a limited amount of inventory of cars that we have, if we don’t have a sponsor that we don’t need to be trying to do our best for, then we’ve got to talk to our drivers and say, ‘OK, this race here, you can’t take any chances. We don’t need to have any damage on this car when the race is over because we need to take it to the next race.’”

Davis admits the racer comes out in everyone during an event, even himself, when he hollers over the radio to his teams to make something happen, losing focus of the future races.

Meanwhile, Davis confirmed he has gotten together with other team owners in the Xfinity garage to make a list for NASCAR – a list that would hopefully help the smaller teams survive upon returning to racing.

“If [NASCAR] could waive entry fees and just let us enter on time and then take the entry fee out of our purse for a certain amount of time to help us get the cash flow back going. They can do things like that, and that was one of the things that was on our list that I think is worthy of them talking about.”

Davis believes NASCAR will be accommodating with race teams of all sizes.

On the competition side, JDM has gotten off to a respectable start through the opening four races. Little has two top-20 finishes and had never sat in an Xfinity car prior to the season opener at Daytona International Speedway. Both Starr and McLeod have average finishes in the 22nd-bracket, while Lyons finished 17th at Daytona.

With many driver changes heading into the season, Davis is happy with the performance thus far.

“It’s not been bad, it’s been a decent start,” he said. “We’re just ready to get back together and go racing again.”

But knowing that the NASCAR shutdown may only be half over, Davis has relocated to his Port Orange, Fla. home, waiting for the season to resume, stating COVID-19 will not shut the team down.

“I don’t see a way it shuts us down,” he said. “As long as NASCAR survives, we’re going to survive, I’ll make sure of that. We have ways to make it happen. We do more with less.”