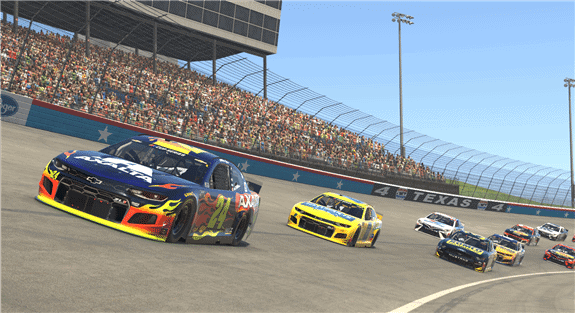 It’s time again for the eNASCAR iRacing Pro Invitational Series. This week, 30 drivers will compete at virtual Richmond Raceway in the Toyota Owners 150 on Sunday, April 19 at 1 p.m. ET.

After a week off, more websites and apps have joined the fray, as eNASCAR is offering more options for fans to get their fantasy fix. FanDuel is among several NASCAR fantasy options for this race. They’re offering some daily fantasy contests on their site, including tournaments and some cash games. Drivers will earn points based on their finishing position as well as bonus points for laps led (0.25), fastest laps (o.40) and laps completed (o.10). Those outside Arizona, Hawaii, Idaho, Louisiana, Montana, Nevada and Washington may deposit and enter paid contests on FanDuel.

DraftKings also has tournament and cash contests open for Sunday’s race. The biggest difference between DraftKings and FanDuel scoring is that DraftKings adds or subtracts a point for each position gained or lost on the track. Unfortunately, qualifying is expected to start right before the race so it may be difficult to adjust your lineups in time. DraftKings acknowledges this and says it may adjust the start time until after the starting lineup is known. Its current start time is 1:10 p.m. ET, so keep this in mind should you plan to make any changes.

Other apps and sites return this week and are free to play for cash and prizes.

The NASCAR Finish Line app is on iOS and Android devices for those 21 and over. In this game, you can choose the top-finishing driver from four options. After picking six drivers (one from each group), you will then predict who will place first and second in Sunday’s race. According to the app, the top 100 fans win a guaranteed prize, and those who earn 500 points win or split the $5,000 jackpot. 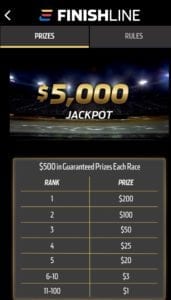 Also, the FOX Bet Super 6 app is free to play and awards a $5,000 jackpot to those who get all six correct. If no one gets all six right, then $1,000 will be split among users with the next highest correct picks. This week, the app has Timmy Hill, Chase Elliott, Jimmie Johnson, Denny Hamlin, Kyle Busch and Joey Logano. You can choose where you think each driver will end the race by sliding the bar under “Finish Place” to the range you want. Positions one-30 are separated in increments of five, while 31-40 is the final range.

Finally, if IndyCar iRacing is more your thing, go to fantasy.indycar.com to compete in INDYCAR’s iRacing Fantasy Challenge. There are three rounds left in the series and Saturday’s event (April 18) is at virtual Twin Ring Montegi. You choose a team of four drivers that will total no more than $100. Drivers earn points for finishing position and bonus points for winning the pole, leading a lap, leading the most laps and those on the podium. There will be 10 winners each round, so make your picks at least 15 minutes before each event. See the website rules link for further details.

Now, here are a few iRacing Pro Invitational Series drivers to look for when making your props this weekend.

Byron should be on your radar every week. The No. 24 Hendrick Motorsports driver is well-versed on iRacing and proved it at virtual Bristol Motor Speedway. Byron began the race on the pole and led 116 laps en route to victory. Expect a similar performance at Richmond, another short track.

Even though Byron hasn’t finished in the top 10 yet at the real Richmond racetrack, his prestigious iRacing history is enough to overlook that slump. In fact, he finishes in the top five at Richmond in just under half of his sim races. Byron also led 80 laps at Texas Motor Speedway before sliding back to seventh place. Lastly, he currently has the highest odds to win at +200.

As long as Byron steers clear from any on-track trouble, he should finish well.

Hill is another competitor who is practically a sure bet to earn a top five. In fact, he’s the only one who has done that in all three Pro Invitational Series events. He also has yet to end a race worse than third, which is simply incredible. Still, it isn’t as surprising as one might think.

Hill boasts a nearly 40% win rate on the iRacing platform. Even more astounding is that he’s finished in the top five over 70% of the time. Additionally, Hill knows when and how to make the race-winning move. He bumped Byron out of the groove to take the victory at the simulated Texas Motor Speedway two races ago.

If Hill doesn’t win on Sunday, he’s a solid bet for another top-five finish.

Although Nemechek doesn’t have as many iRacing starts as his peers above, he’s still very knowledgeable. He was the runner-up at Bristol and finished eighth at Texas after leading 10 laps. Overall, Nemechek finishes in the top five about a third of the time in sim racing.

In addition, he’s had good performances in the real world — both this year and at Richmond. In the NASCAR Xfinity Series last year, Nemechek earned a seventh-place finish at the 0.75-mile track . And as far as this year goes, he’s run near the front in several races, but contact with the wall and other cars gave him poor results.

Nemechek will need to avoid the calamity that often comes with short track racing to claim another top 10.

I’m going right back to the well with the reigning Cup Series champion. Busch is putting in a lot of hours to learn iRacing, and he’s steadily making improvements. Yes, I know the results don’t show it, but competitors notice his progress. The veteran is far too talented behind the wheel to continue this bad luck.

Perhaps Busch could use some of his illustrious experience from the real Richmond track. The No. 18 Joe Gibbs Racing wheelman has six NASCAR Cup Series wins there, two of which came in 2018. He also has 18 top fives and 22 top 10s in 29 events. Last year, he led 101 and 202 laps, but ended up eighth and second, respectively.

If you think Busch is too risky to use in daily fantasy or just unsure where he’ll finish, his teammate Denny Hamlin is a safer option. Hamlin has much more iRacing experience and won at virtual Homestead-Miami Speedway. He also was fourth at virtual Bristol and is a strong candidate for another solid result.

Here’s another fellow who may be able to use his short track abilities this week. DiBenedetto, who raced for Leavine Family Racing in 2019, finished 14th last fall at Richmond. Also, who could forget his near-victory at Bristol until Hamlin ran him down late in the race. Matty D still finished second after leading 93 laps.

Don’t discount DiBenedetto’s sim racing experience, though. In the Food City Showdown at Bristol, he took the No. 21 Ford of Wood Brothers Racing to a fifth-place finish. Also, about 65% of his iRacing starts remarkably resulted in top fives.

DiBenedetto has a good chance to use both virtual and real-life knowledge to end the race on top Sunday. However, there us just one reset allowed for crash damage, so he will need to avoid incidents as best he can for another top-five finish.