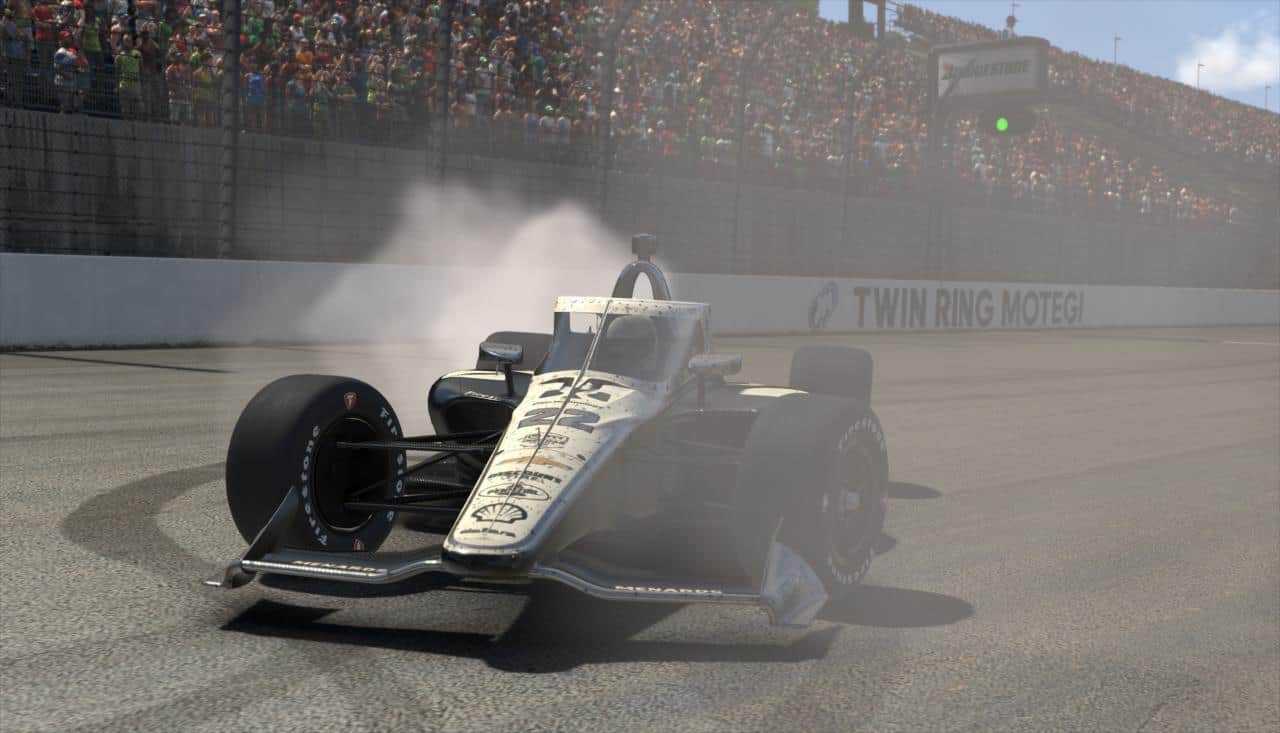 For the first time in the INDYCAR iRacing Challenge Series, a driver has won consecutive races. On Saturday afternoon (April 18), Team Penske’s Simon Pagenaud took advantage of his teammates’ late race scuffle with a lapped car to win the Firestone 175 at virtual Twin Ring Montegi.

The race looked to be similar to last week’s event at Michigan International Speedway, with early action and pit strategy the main themes. However, lapped traffic spiced up the competition in the closing laps.

With about 10 laps to go, Oliver Askew, who tried to get his lap back, made contact with Scott McLaughlin and Will Power. McLaughlin got the worst of it when he spun and hit the wall, out of contention for the lead.

This left the door wide open for Pagenaud, who fought briefly with Power’s hurt car before taking the lead. Scott Dixon soon followed suit and set his eyes on the Frenchman. Dixon tried valiantly to snag the virtual win and defend his real-life Montegi title, but ultimately had to settle for second place. Power ended the race in third, with Marcus Ericsson and pole-winner Robert Wickens rounding out the top five.

“It was a crazy race,” Pagenaud told the IndyCar on NBC broadcast. “Very hectic with Will at one point and with Dixon at the end. I work hard all week to be competitive, and I think I’m catching up. I think I’m getting there.

“I’m having a lot of fun. It’s so stressful. You’re still lacking a lot of feedback. I’m relearning another way to race.”

The No. 22 Penske driver said he has been practicing on iRacing about three to four hours a day, as well as some physical training to stay in shape.

“I want to put in the hours, and I always believe that hard work pays off.”

He believes that some of the aspects of sim racing could transcend to the real world.

“I think Ben [Bretzman, race engineer] and I discovered something that could be very useful for us in the future,” Pagenaud said. “I, myself, found that iRacing is really sharpening me up. I’m definitely going to use it a lot more in the future because there’s so many details you can work on, just like a race weekend, but you can repeat and repeat. And what’s really hard for a driver is to be able to replicate the performance, perfect performance.

“I’m definitely finding a lot of benefits, and being able to work strategies with Ben is also a huge advantage for my race car.”

Several drivers were involved in incidents in the first few laps; Tony Kanaan ended up flipping in the back of the pack, and Max Chilton was tagged and spun around by Robert Wickens on lap 3.

The caution came out the next lap when Helio Castroneves, in his iRacing debut, made slight contact with another car and slid in the middle of the track. Two other cars slammed into him and lifted him into the air.

A look at the incident that brought out the first caution of the day.#INDYCAR // #Firestone175 pic.twitter.com/t9jIoZM3Fr

The race stayed green for the remainder of the event, but some drivers still had some big moments. Alexander Rossi bounced off the wall early on, and on lap 34, Chilton also hit the wall and incurred too much damage to continue the race.

Other drivers encountered technical glitches during the event. Felipe Nasr, who was running in the top 10 early on, had too much net code and race control took him out of the race. Then later on lap 56, Tony Kanaan pitted, but his tires were never changed according to AJ Foyt Racing on Twitter. After quickly going three laps down, Kanaan exited the race on lap 90.

One more notable accident came when Rinus VeeKay, also in his iRacing Series debut, wrecked coming down pit lane with 23 laps left in the race.

Pit strategies came into play as all the leaders — Power, Dixon, McLaughlin and Pagenaud — made their final stops with 27 to go. Fellow Penske driver Josef Newgarden was on a strategy of his own, as he was 10 laps short on fuel. He surrendered the lead around lap 100, which set up Power and McLaughlin‘s incident with Askew.

The INDYCAR iRacing Challenge Series continues next Saturday, April 25, at Circuit of the Americas.