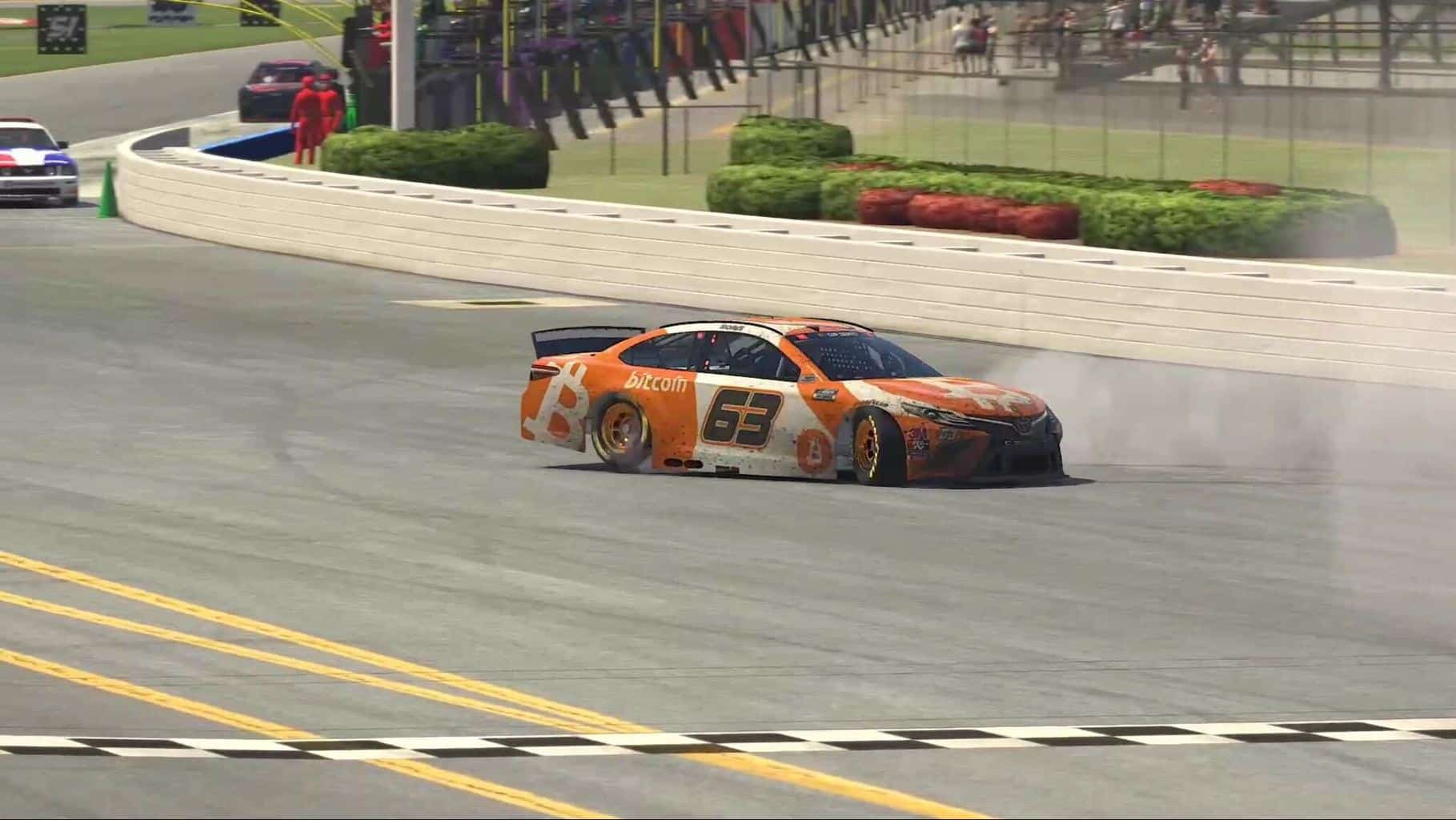 In a race filled with wrecks and spins, Bryan “Boris” Cook took the victory in the LeafFilter Replacements Series at virtual Talladega Superspeedway Tuesday night (April 21).

Cook had the help of Parker Kligerman behind him in a green-white-checkered finish to win his first race in the Series.

“I’m just so excited, these guys are like my heroes,” said Cook, who works in media for Joe Gibbs Racing. Some of those drivers he referred to were Kyle Busch, Bobby Labonte and Kevin Harvick. Busch sent a congratulatory text message to Cook after the event.

When the iRacing broadcast asked about Cook’s strategy at the end, he stated that the “low line was the key” to leading.

TJ Majors — Joey Logano’s spotter in the NASCAR Cup Series — and Dale Earnhardt Jr. were working in tandem alongside Cook and Kligerman, but the inside lane surged ahead on the final lap. Kligerman jumped out of line on the last turn, far too late to get ahead. He still managed to finish second behind Cook.

Garrett Smithley came from the back of the large field to finish third. He had originally won the pole, but had to go back during the pace laps since he finished in the top five at Myrtle Beach Speedway (a Series rule). Majors and Earnhardt rounded out the top five.

Coleman Pressley, who spots for Brad Keselowski in the Cup Series, was sixth. Josh Williams was seventh and Alabama’s own AJ McCarron was eighth. Kevin Iannarelli and Kevin Hamlin rounded out the top 10.

The race started fairly well, with Taylor Gray and Landon Cassill in front of the pack. However, on lap 12, Chase Briscoe’s car got loose off of Christian Eckes, bounced off the wall and tagged two other cars. Anthony Alfredo, Ty Majeski, Harrison Burton and Kyle Long were involved, along with a few others.

The first big one at @TalladegaSuperS, and @RonCapps28 maneuvers his way through ?

Get a live look at his virtual @NAPARacing @shoeracing cockpit NOW ⬇️

The green flag had barely waved before the yellow was back out, this time for Brent Wentz. Before he could fully get his car going, it spun and hit Briscoe. Other cars behind him also spun around, trying to avoid Wentz and Briscoe.

The field finally restarted and looked fairly steady until Rodney Childers started moving out of line a bit. The broadcast speculated that his temperatures might be going higher, and they were right. Childers blew his engine on lap 26 and collected much of the field in the resulting wreck. Race winner Cook was involved in this, as he was right behind Childers and had nowhere to go. However, racers were allowed to use one fast repair in this event.

Others who got caught up in this incident included Busch, Iannarelli, Tyler Overstreet, Majors and Gray.

The racers went back to green halfway through the 60-lap event, and from there it appeared it would end as a fuel mileage race. In fact, it was still green with 10 laps to go when Eckes, who had just made his pit stop, got hooked by Justin Allgaier and collected another car.

Unfortunately the caution did come out shortly after when Cassill got turned around by David Hudson. Hudson also tagged Justin Haley, and as the smoke cleared, Chad Knaus seemed to overcorrect and hit the outside wall.

The race restarted with three laps to go, but that didn’t last for long as two separate accidents occurred. Drew Herring became loose off a car behind him and both went into the wall. Herring ended up flipping several times down the backstretch. Then as cars tried to slow down further back, Harvick, Childers and a few others wrecked and spun.

This set up the overtime finish, and Cook held on for the win on the last lap.

The LeafFilter Replacements Series continues on Tuesday, May 5, when the street stocks will race at the virtual Phoenix Raceway.