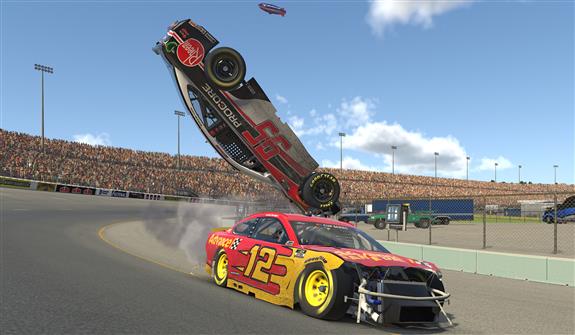 NASCAR’s eRacing iRacing Pro Invitational Series runs at Talladega Superspeedway this weekend, and on Thursday, April 23, the entry list for both events was revealed.

On Saturday night, there will be a race featuring drivers from series other than the NASCAR Cup Series. On Sunday, the Cup Series drivers will battle in the eNASCAR iRacing Pro Invitational Series event.

The race on Saturday is set to start at 8 p.m. ET. It will be broadcast on eNASCAR.com/live and streamed live on NASCAR’s YouTube channel.

Qualifying for the event will be a single-car two-lap run. Each heat race will be 10 laps long, with 20 cars transferring to the feature event of 40 cars. The feature will be 57 laps with manual cautions and a maximum of three green-white-checkered finish attempts. Drivers will have one reset during this event.

The lineup for the event on Sunday will consist of single-car runs of two laps apiece. The event will be 70 laps. The format for this race will be the same as Saturday: manual cautions, one reset and a maximum of three green-white-checkered finish attempts. Forty drivers, including Jeff Gordon, are expected to compete in this race at virtual Talladega.

This race will take place at 1 p.m. ET with TV coverage provided by either FOX or FOX Sports 1.