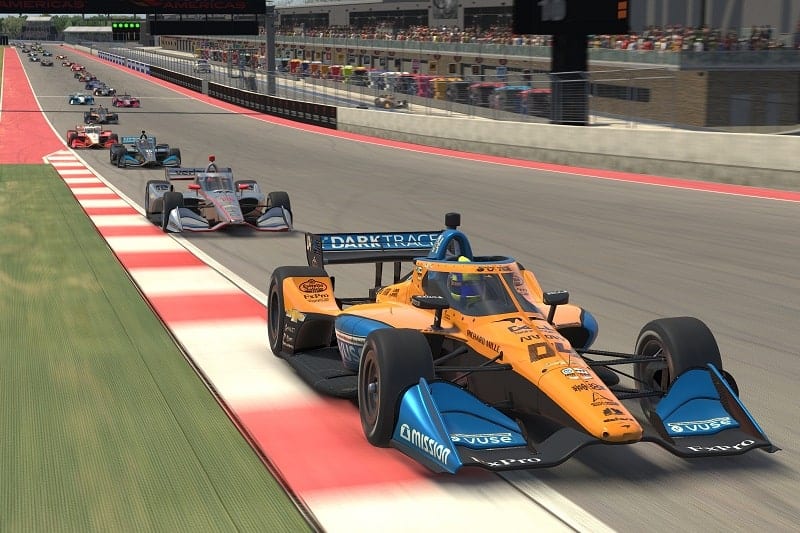 AUSTIN, TEXAS - APRIL 25: (EDITORIAL USE ONLY) (Editors note: This image was computer generated in-game) Lando Norris, driver of the #04 Arrow McLaren SP Dallara, leads a pack of cars during the IndyCar Auto Nation iRacing Challenge at virtual Circuit of The Americas on April 25, 2020 in Austin, Texas. (Photo by Chris Graythen/Getty Images)

Just one race remains in the IndyCar iRacing Challenge after Saturday’s (April 25) event at Circuit of the Americas. But it was a Formula One driver who stole the AutoNation INDYCAR Challenge, and it wasn’t even close.

McLaren driver Lando Norris, invited by INDYCAR to compete in the fifth of six rounds, took the pole and then led the majority of the race at the virtual Austin, Texas track. The only real threat for the win came from Norris himself, as he spun out following his first pit stop.

So what can racing fans take away from Norris’ dominating victory? Can we learn anything from the drivers who didn’t cruise to the front on Saturday? Here are our takeaways from Round 5 of the IndyCar iRacing Challenge.

With five races in the books, at least half of the IndyCar iRacing Challenge events will have been won by people who are not full-time drivers in the NTT IndyCar Series. Sage Karam, Scott McLaughlin and now Norris have been race winners. Not only are they making guest appearances, only one of them has even run a real IndyCar race!

That’s an eyebrow-arching fact and, as we’ve talked about before, proof that real-world resumes do not translate to the iRacing world. Both Karam and Norris are very experienced sim racers, with Norris having been sim racing since he was a child. So these results, and the lack thereof for some of the biggest names, have to be taken with a grain of salt.

Plus, it’s worth noting how much the NBCSN commentary team hypes up these guest drivers. When Dale Earnhardt Jr. joined the race at Michigan, he was one of their most popular subjects, and on Saturday a good 70 percent of the conversation revolved around Lando Norris. That’s understandable to an extent, because they’re new faces and they both ran well. But it also comes off like the broadcast team is leaving IndyCar regulars in the dust.

So close, and yet so far! After Norris’s spin, it seemed like fate had smiled on Will Power and was finally going to give him the iRacing win he so richly deserved. But then Power spun out, taking that chance back like Lucy from Peanuts stealing the football away from Charlie Brown.

These five races have just been one thing after another for the 2018 Indianapolis 500 winner. At least he recovered to finish sixth, which is nothing to sneeze at. Not all is lost either; because he’s been so consistently good, Power is tied for the points lead and could still wind up being the overall champion when the IndyCar iRacing Challenge concludes next weekend. That would be the ultimate victory.

Power just needs to finish well in next Saturday’s finale at Indianapolis Motor Speedway. Yet with all the terrible luck he’s had, it feels like he’s either going to win or Godzilla is going to come down and eat the No. 12 Verizon Team Penske car.

Somehow managed a P15 after starting on the last row. This is quite a feat for me in @iracing land. #DRIVEPINK @AutoNation pic.twitter.com/gppJhDS8lS

3. Is Rossi saving the best for last?

The most surprising story of this iRacing tournament has been Alexander Rossi. The 2016 Indianapolis 500 winner and future IndyCar champion in waiting has struggled mightily in sim racing; he’s been honest about the fact that it really isn’t his jam. The Andretti Autosport driver is one of the best open-wheel racers in the real world but he’s not a gamer, and that’s shown throughout.

Rossi finished 15th on Saturday, and that’s after failing to register a qualifying time. He also finished seventh at Michigan two weeks ago, which isn’t shabby either. But given Rossi’s sheer amount of talent, it feels like there has to be more in his proverbial gas tank.

Since the Indianapolis Motor Speedway finale is at a place where he had the biggest victory of his whole career (and almost had a second one in 2019), could Round 6 be the one where Rossi finally emerges as a virtual contender, too? And how cool would that be for fans just to watch?

The IndyCar iRacing Challenge concludes May 2 at Indianapolis. If you missed Saturday’s race, you can stream it here.