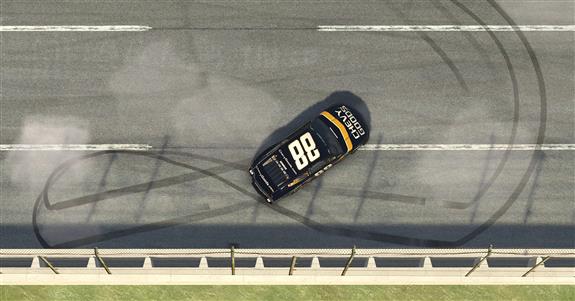 Corey LaJoie started from the pole position in his Pro Invitational Series debut and put himself in position to win. But his last-gasp effort fell just short in a last-lap photo finish. Lajoie and Ty Dillon were battling on the inside line off turn 4, with Bowman holding the outside. That’s when Lajoie clipped Dillon’s No. 13, sending him spinning. As Dillon turned into the grass, the contact stalled Lajoie just enough for Bowman’s No. 88 to hold on to the start/finish line.

“I guess just right place, right time, kind of the normal speedway racing deal,” Bowman said after the win. “I felt like the bottom wasn’t the place to be, so kind of let Ty have the bottom on that restart and got up, and just tried to keep the run timed well and knew that most of the time the top was leading there at the start‑finish line.

“So really just got to thank [Ryan] Preece for pushing me because that’s what made the difference at that point.  When you’re that lead car, it’s really the guy behind you making the difference. Glad it worked out.”

The fifth installment of the sport’s iRacing exhibition, created during the NASCAR COVID-19 postponements, was tamer than a typical Talladega race. Only three caution flags flew during the entirety of the 70-lap event. But Bowman triumphed in a race that still saw plenty of shuffling within the draft.

After an anthem from Alabama lead singer Randy Owen and a command by actor Tim Allen, LaJoie led the field to the GEICO 70 green flag. Dillon took the lead early on after the leaders began to dice around up front.

The “Big One” struck on lap 17, causing the race’s first caution flag. More than 10 cars were involved when Ricky Stenhouse Jr.’s No. 47 turned across the nose of Dillon’s No. 13 to start the wreck up front. Both cars went spinning in the middle of the field, causing chaos.

Among those swept up in the incident was Hall of Famer turned NASCAR on FOX analyst Jeff Gordon. The four-time Cup champion, who made the transition from calling NASCAR’s iRacing events to driving in one, piloted his familiar Pepsi “shards” No. 24.

But Gordon’s return to the sport wound up ruined. Hit in the crash, Gordon spun into the outside wall and went airborne. His car was bumped again, sending it into the catchfence and getting stuck there.

Jeff Gordon came out of retirement in style today ?? https://t.co/dMVPjpKxNd

As each driver gets one complete reset of their car, returning it to brand-new condition, Gordon and several others went ahead and used theirs. Fellow FOX Sports in-race reporter Clint Bowyer did the same.

When the green flag flew once again, Brad Keselowski jumped to the lead. Cup rookie Brennan Poole, making his first Pro Invitational Series start, slid in behind him. William Byron, winner of the previous two iRaces at Bristol Motor Speedway and Richmond Raceway, then linked up with Bowyer in tandem. The two of them immediately headed to the front.

Byron inherited the lead soon after when Poole switched lanes, got turned downwards and hit Keselowski’s No. 2, sending them both off track. Keselowski was later involved in another incident when Jimmie Johnson’s No. 48 came down across the nose of his car, causing the seven-time champion to go sliding through the infield. Johnson was able to continue on, although both drivers never bounced back into serious contention.

These incident cleared the way for Bowman to move up. He fought for the top spot, then kept it for much of an extended green-flag run. Meanwhile, the Byron/Bowyer grouping was forever split when Bowyer’s engine blew while running in the lead pack.

Parker Kligerman briefly took the lead for the first time just past the race’s halfway point, surrendering it to Bowman for a moment on the backstretch. John Hunter Nemechek also spent a considerable amount of time at or near the front.

But green-flag pit stops began soon after, spreading out the main pack and leading to an extended period of single-file action. Once complete, the running order remained largely the same – John Hunter Nemechek and Byron cycled back to first and second, respectively, in position to potentially battle for the win on their own.

The race’s second caution made that a moot point, bringing Bowman back into the mix. Chase Elliott’s No. 9 was turned by Poole in the outside lane, sending him careening down into Gordon. Several other cars were collected in the incident. Gordon slammed into the outside retaining wall, further damaging Poole’s car as well. The wreck bunched up the field with less than 15 laps remaining.

When the green flag finally flew again, the lead swapped hands no fewer than five times. Nemechek led the group to the line, but Ty Dillon, Garrett Smithley, Bowman and Ryan Preece traded it back and forth before another accident reset the field.

With four laps to go, contact between Preece and Joey Logano sent Logano’s MoneyLion Ford Mustang spinning, collecting all three Team Penske cars first and several others in the aftermath. Logano’s No. 22 spun down and hit teammate Keselowski, and Logano then spun back up the banking and hit his other teammate, Ryan Blaney. Blaney’s car made contact with the wall and flew into the air, barrel rolling into the grass at the bottom of the track.

The incident also claimed Joey Gase, Erik Jones and Ross Chastain, the latter making contact with Blaney’s flipping No. 12. Chastain was in the news earlier as Ryan Newman announced on the FOX broadcast he’ll return to the No. 6 next month, pending medical clearance once NASCAR ends its COVID-19 postponements.

A green-white-checkered finish was in order with the late wreck. Then, after the restart, there was another incident with Elliott on the backstretch during the final lap. But the GEICO 70 stayed green, leading to a frantic finish with several cars in contention to win.

Ty Dillon and Bowman led the inside and outside lines, respectively, as the cars exited the final turn. That’s when Dillon moved up to block and instead was turned by LaJoie, sending the No. 13 into the infield grass. LaJoie got a push towards the front as Bowman headed through the tri-oval, but the field scattered and Bowman took the win.

“I’m just surprised that we won an iRace,” Bowman said. “I mean, it’s like — it’s pretty wild to me with how good a lot of those guys are and how much experience that they have.  But if it was going to happen somewhere, like Talladega is a place where you can kind of be in the right place at the right time and make it happen.”

Bowman held on for victory in a three-wide finish with Preece and LaJoie. LaJoie, Preece, Smithley and Landon Cassill rounded out the GEICO 70 top-five finishers. Byron, Poole, Kyle Busch, Kurt Busch and Daniel Suarez completed the top 10. Gordon, meanwhile, finished a distant 38th in his first NASCAR event since filling in for an injured Dale Earnhardt Jr. in 2016.

well I actually tuned into this irace because Gordon was going to participate – I refuse to say “race” since that’s not what this is. Of course for the most part, IMO, its all about listening to them talk about how marvelous this all is. Apparently it escapes me. Maybe if I was actually playing along at home it would be fun but watching pretend cars just doesn’t do it for me.

About the only good thing I can say is that for a change, I watched a “race” at a RP track and wasn’t nervous that someone was going to get hurt.

I tuned in and watched long enough to determine that it was going to be listening to Michael Waltrip babble and watching Bowyer and Gordon sitting in front of simulators. About as exciting as watching paint dry. I turned it off.