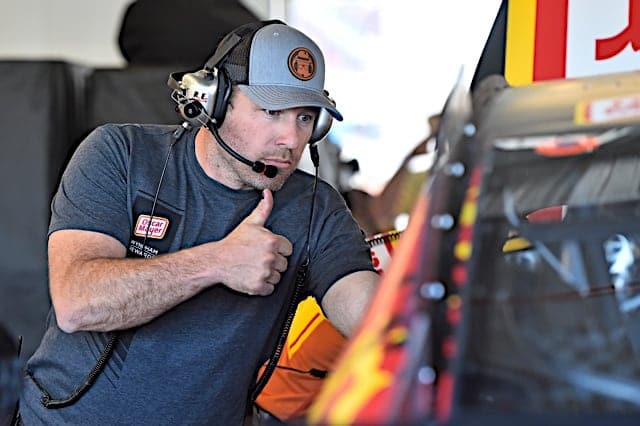 Ryan Newman is on the verge of completing his recovery from a scary wreck on the last lap of February’s Daytona 500. The only barrier he claims is standing in his way?

Newman made a special appearance on FOX Sports’ coverage (April 26) of the NASCAR iRacing Pro Invitational race at Talladega Superspeedway. There, the 42-year-old announced plans to return to the Cup Series, pending official medical clearance from NASCAR. If approved, he’ll slide behind the wheel of the No. 6 Roush Fenway Racing Ford once NASCAR resumes following a hiatus due to the COVID-19 pandemic.

How soon will that be? Rumors have that happening as soon as next month after NASCAR race shops reopened in North Carolina earlier this week.

Newman was critically injured on the last lap of the 2020 Great American Race after his Ford was turned head-on into the wall by Ryan Blaney. His car was then struck by Corey Lajoie while upside down before coming to rest past the start/finish line.

“I am so excited and thankful all at the same time,” Newman told FOX Sports’ Mike Joy on the Talladega telecast. “I am excited to be healthy and, at some point, get back in the race car when the world starts turning again.

“I’m thankful for all the people and the support that I have got. Friends, family, fans, you name it.”

Newman was sidelined for the NASCAR Cup Series events at Las Vegas Motor Speedway, Auto Club Speedway and Phoenix Raceway before the series was sidelined due to the coronavirus outbreak. The NASCAR COVID-19 cancellations have been in place since March 13.

Ross Chastain replaced Newman in his normal Roush Fenway Ford and expressed his support for the veteran’s return on Twitter.

I’m happy Ryan is returning to the No. 6 when NASCAR resumes. He has a wonderful team around him and it’ll be great to see him back competing.

Thanks to Jack, RFR and all their sponsors for letting me keep his seat warm while he was making his recovery.

“We share Ryan’s enthusiasm in his return to the track,” the statement read. “We look forward to Ryan returning to racing as soon as he is medically cleared to race.”

There’s no official word from NASCAR on if Newman will be granted a playoff waiver. But other drivers in similar situations (2015 Cup champion Kyle Busch missed three months) have been given them.

Happy for Ryan if this is what he wants. No reason he shouldn’t be granted waiver.

Also happy for Ryan and glad to hear some good news.
Not a big fan of giving anyone a waiver but that’s the way it works now.