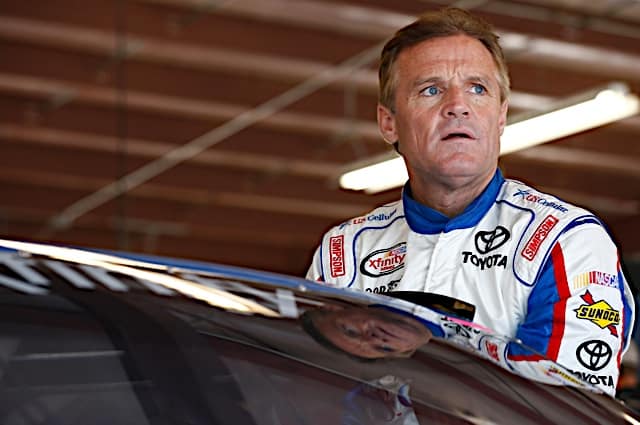 In what was a surprise to some, both Raceway Park and Park Jefferson International Speedway, located in Jefferson, S.D., held dirt races over the weekend, the first oval-track action since the coronavirus outbreak in mid-March.

On Saturday (April 25), Park Jefferson played host to racing’s return with an event called the Open Wheel Nationals. Both the IMCA (International Motor Contest Association) modifieds and 410 Sprint Cars had an invitation-only event, with 32 teams from both series attempting to make the 24-car feature.

The next day (April 26), Raceway Park welcomed five series, including the IMSA modifieds. Among competitors in both events were NASCAR veterans Kenny Wallace and Ken Schrader, who made an approximate nine-hour trip to South Dakota together in Schrader’s motorhome and race trailer.

Wallace had no intention on racing the event until he received a phone call on April 18, from his friend Toby Kruse, owner of Marshalltown Speedway in Marshalltown, Iowa. Kruse set Wallace up with Tim Love, owner of Tire Demon Machines. The deal was for Wallace to drive one of Love’s cars for both events in South Dakota.

“Toby called me on April 18 and he said, ‘How are you doing, Kenny?’ I said, ‘Man, not good,’” Wallace tells Frontstretch. “He says, ‘Well, I’ve got something to help you out. We’re going to run this race, would you run?’ I said, ‘Oh my gosh, I would love to.’ We were able to put it together in a couple of hours.”

Wallace sent his decals to Kelley, Iowa, home to Love’s shop, where he proceeded to prepare the car for the next week before it was sent down the road to South Dakota. Though not originally scheduled to race in The Mount Rushmore State, Wallace intended to race on May 1 in Boone, Iowa (Boone Speedway), for the team.

Familiar with the UMP (United Midwest Promotions) modifieds, which is owned by DIRTcar, Wallace says it’s a challenge getting into a dirt car you’ve never been in prior to race day.

“It is very hard to jump in a strange man’s racecar, and the seat was fine, but it wasn’t my seat,” Wallace adds. “The reason it’s hard is because these guys are very good and some of these guys do it for a living, although it’s hard. The way they do it for a living is they build their own racecars, sell racecars.”

Wallace, who has been vocal about his stance of the coronavirus pandemic via his social media channels, says there was no hesitation from him to hop in a racecar given the state of the world. After all, he and the racetrack, by all standards, followed Center for Disease Control and Prevention guidelines.

It did, however, lead to a conversation with his wife, Kim, who is more susceptible to COVID-19, given she has controlled type 2 diabetes.

“I didn’t have any reservations because [the track] told me what they were going to do,” Wallace says. “However, my wife was excited for me, but she just said, ‘Don’t let your guard down and don’t bring back that coronavirus. Remember, I have diabetes.’ So she compromised, and we have grandkids.

“I did not have any hesitation because [the track] put a tremendous amount of guidelines [up]. It was incredible. I knew I could control myself and the people around me.”

Adam Adamson, track owner of Park Jefferson, made sure track employees and the race teams were following CDC guidelines. His crew would hand out masks to people that didn’t have them, while having hand sanitizer for everyone at the venue. Any team that competes at the 4/10-mile track needs a transponder box to be scored when crossing the finish line, that, too, was sanitized and put into a Ziploc bag, so there was no direct contact.

“We did some little things that were different,” Adamson tells Frontstretch. “…We normally would pay our drivers at the end of the race, but instead we’re mailing out all of the paychecks just to avoid any additional social interaction that frankly wasn’t needed for the event. We tried to take a lot of precautions to make sure the people stayed safe.”

With both tracks following CDC guidelines, it didn’t allow for fist bumps and high fives upon purchasing a pit pass. Instead, it was more of an unusual setting, following social distancing protocol.

“Once you got your pit pass, once you wore your mask, it was very exciting and became very therapeutic. Later on that night I started to go to bed and I said, ‘Oh my god, I didn’t even think about the coronavirus all day.’ It was just great.”

On Sunday at Raceway Park, every person who purchased a pit pass was required to get their temperature taken. If they had a fever they would be removed, similar to what companies such as WWE has done with its performers in Orlando, Fla.

“To get in, they had a medical staff that checked everyone’s temperature in a very nice, clean way,” Wallace says. “If you had a fever you were not allowed to buy a pit pass. Whether you’re asymptomatic or not, you can’t check for coronavirus at the racetrack. The best thing is to check to see if anyone has a fever.”

Leading up to the weekend of racing, approximately 700 tickets were sold for the event at Park Jefferson. Over 500 fans were set to be at Raceway Park on Sunday evening. But as public safety concerns grew last week, track officials decided to close the tracks to spectators, refund money and broadcast the races on Speed Shift TV (Saturday) and Advantage Racing TV (Sunday).

Meanwhile, in the pits, haulers were parked approximately 30 ft. apart, though each team could have up to 10 crew members. Adamson stated the pit area at Park Jefferson can hold upward of 140 cars. Quick math: with a combined 64 teams at Saturday’s event between the sprints and modifieds, there could be a maximum of 640 people in attendance on top of race officials and safety crews, though the track owner estimated roughly 50 sat in the grandstands.

Wallace, who had never competed in a race with no fans in attendance over his lengthy career, says he believes the tracks did an admirable job of putting on a show, even allowing crew members to social distance in the grandstands.

“Although it was strange, it turned out better than I thought it would be, because there was still that feel of people watching you. That was nice.”

In grassroots dirt racing, it’s not uncommon after the event to go up to a race hauler and drink beers with the competitors. That, too, was “a little different” for Wallace, as there were no big gatherings at any of the trailers post-race.

While paying close attention to all the minute details, Wallace says he was very comfortable with the atmosphere, particularly because of the location. South Dakota, native to less than 1 million people, is one of the few states that has stayed open through COVID-19.

The decision to stay open has been met with controversy; many people believe the state should be closed. Recent studies show that many American citizens are willing to forgo certain rights for the sake of public health.

The surroundings of the racetrack were very spacious.

“It was very comfortable because these racetracks had a lot of land,” Wallace says. “The thing about what we did is — I would encourage people to stop and think about it — we raced in South Dakota, it’s very desolate.

“It made sense to start this in [South] Dakota. The racetrack is off the side of the highway, everything is so spread out.”

When it came to details such as CDC guidelines being taped on walls, soap dispensers being filled to the brim, having janitors stationed outside the bathrooms for cleanup, both racetracks overachieved in sanitation expectations, according to Wallace.

Even at Park Jefferson, EMT workers walked the grandstands, assuring crew members they were at least 6 ft. apart from one another. And if one of the members didn’t have their mask on, they were “called out.”

Despite there being risk involved in mass gatherings consecutive days, Wallace is pleased with the outcome.

“Was there a risk? Yes. But I thought it was very minimal and I thought if I did my job I was fine,” Wallace says. “I’m knowledgeable, and it’s very clear the way to get the coronavirus is somebody coughs, a droplet has got to come out, it’s got to get in your nose, mouth, eyes or your hand had to touch the droplets and you’ve got to rub your face. From that standpoint, I felt like if I don’t do none of that, my risk is minimal.”

As for the event as a whole at Park Jefferson, Adamson says everything at the track was “very, very quiet,” but felt his team did all it could with the unique circumstances surrounding the race.

“It was a very awkward event live,” he said. “I think if people would have been there live they would have been very disappointed in the product because the product was very non-inspiring because you had nobody cheering, nobody excited about the racing, you just had the race teams cheering for their driver or watching what was good and what wasn’t good on the car.

With NASCAR and other series starting to scratch the itch of announcing a possible return date, Wallace says he believes it’s possible, and that the races over the weekend in South Dakota set a precedent on how to run shop.

“Racing could get back [to normal], but it’s not ready yet, no,” Wallace says. “I think it’s got to be invitational only. The reason it’s got to be invitational is because we’re approaching May. Normal [dirt] racing starts April 5, April 6, so everybody is ready to race. So if you say, ‘Hey, we’re going to race,’ the car counts will be too big, the grandstands will be packed.

“I think in states that are desolate, they have a really low risk of infection. I think they’re good to go. …I don’t think racing is ready to go back to normal; however, if they do it like we did — no fans in the grandstands, separate everybody, minimal car counts — I think that is a great start.”

Though his wife is more susceptible to catching the coronavirus, Wallace says he and Kim decided against being self-quarantined for two weeks upon returning to St. Louis.

“We talked about it,” Wallace says. “The whole time I’ve been on this trip I’ve been thinking about my wife and grandbabies. I feel like I’ve done everything I can. I feel like a million dollars: just had my temperature checked yesterday, it’s 98.6.

“I’m not a narcissist, I’m a lover. I’m a good guy. I feel good about myself, and I feel like I did everything right.”

In the pair of events, Wallace finished eighth and 12th, respectively. According to Adamson, Park Jefferson is looking at hosting another race as soon as Saturday, May 9.