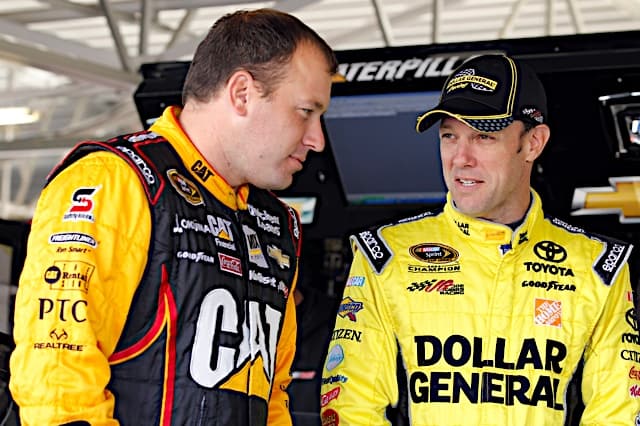 NASCAR Cup Series drivers Ryan Newman and Matt Kenseth have been granted playoff waivers for the 2020 season, according to announcements Tuesday (April 28) afternoon.

Newman missed three races this season after suffering a violent crash at Daytona International Speedway but was cleared to race this week once NASCAR returns.

Kenseth did not race in the first four events of 2020 but signed on to join Chip Ganassi Racing on Monday. Kenseth replaces Kyle Larson in CGR’s No. 42 Chevrolet, a development in the wake of Larson’s firing after he made racial comments during an iRacing event.

The waivers will provide Newman and Kenseth with the chance to get into the Cup playoffs despite missing those races. They must either win a race and be in the top 30 in points by the end of the season or be high enough in points to secure a playoff spot itself.

Newman has 36 points from his ninth-place finish at Daytona. Kenseth will start with zero.

A specific return has not been announced for the 2020 NASCAR season as of yet, but both drivers will be eligible once the sport returns.

I can see Newman ,but why Kenseth?! He didn’t miss those races cause of injury and Larson lost his ride he’s not hurt.

Na$car making rules up a they go and on who you are.

If we think about this decision deeper than a driver’s name. Eliminating the 42 car from the post-season means Larson’s actions would have eliminated any chance of his crew chief winning a title in 2020, the crew members, engineers, team owner, etc. Also eliminates sponsorship TV time for the remaining 10 races which pays the bills.

So in my opinion, it is understandable that NASCAR deemed Larsons actions to not be detrimental to the 42 teams/sponsors opportunity of winning a championship.

But they still could have gone for the owners championship.

is there anything less surprising than Nascar massaging things to suit their purposes.

Yes incredibly unlikely, but what if someone put Larson back in a car after he completed his penance? Would he get a waiver?

Also some pretty warped irony that the two main exhibits leading to the creation of this playoff absurdity see their paths intersect again 16 years later.

I would hope not. Waivers should not be granted to anyone who was found guilty of something that warranted a suspension.