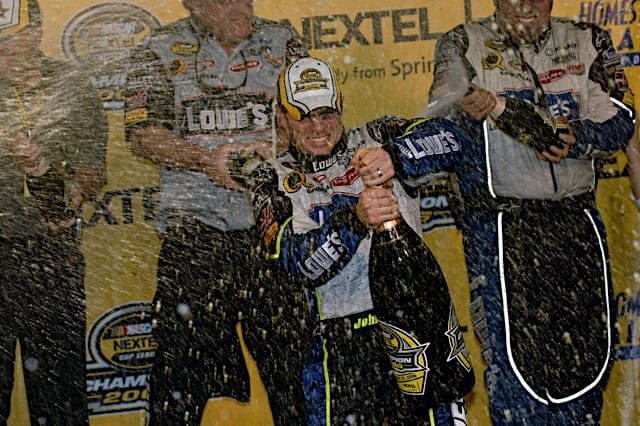 Casey Mears was going to decide the 2006 Daytona 500, that much was clear.

On the white flag lap of a green-white-checkered finish to the Great American Race, Mears was running third, behind leader Jimmie Johnson and Ryan Newman as the pack broke up to race each other behind the front three. In front of him, Newman was the obvious choice. Both drove factory-backed Dodges: Mears for Chip Ganassi, Newman for Roger Penske. Daytona is a tough track to make a three-wide finish happen without issue, so Mears was probably going to finish second. All he had to do was wait for Newman to make the move. The move came with the while flag in the air for the field, with Newman diving to the outside in a now-or-never move.

After winning 18 times in his first four seasons, it was looking like a matter of time until Johnson won a title. But 2006 didn’t exactly look like it was shaping up to be his year, and it was only February. On Daytona 500 pole day, Johnson’s car failed inspection for a rather blatant rear window violation, and crew chief Chad Knaus earned a month off to think about his transgression.

Knaus and Johnson were making a name for themselves as a top pair in the Cup Series, and if Johnson was going to win the biggest race of the season, he’d have to do it with another crew chief calling the shots and a rain of negativity from fans.

Not to mention, being the leader on a two-lap shootout at Daytona is like sitting in the eye of a hurricane. All it would take is Newman and Mears hooking up and making a well-timed move and Newman, who edged out Johnson for Rookie of the Year in 2002, would best his rival again. Sure, Mears was Johnson’s closest friend in racing; the two had known each other since they were teenagers and often traveled to races together as well as spending time together away from the track. They were as close as brothers, but manufacturer loyalty in NASCAR runs deep.

From day one, 2006 would be a challenge for Johnson.

Meanwhile, there was another controversy brewing that would impact the sport for years to come: Toyota had announced in January 2006 that they’d field the Camry in NASCAR beginning in 2007. Some fans rallied against what they saw as a foreign invader, a sentiment that still rears its head from time to time. The announcement kicked off an active and early Silly Season, as the new manufacturer lured Dave Blaney and Brian Vickers away from their rides, opening up a prized ride at Hendrick in the process. It would be months before the Camry hit the track in a race, but already the repercussions were being felt.

NASCAR was still riding the early 2000s high in 2006. Fifteen drivers tried and failed to qualify for the 43-car field for the Daytona 500. Among them was Kenny Wallace, driving for a brand-new team in Furniture Row Racing. New teams were a dime a dozen at the time, and most fizzled in a year or two. FRR would prove the exception. The team missed several races in 2006 and was forced to cut back to a partial schedule a couple of years later, but would win a race in 2011 and, eventually, the Cup championship in 2017. The team folded the following year, lacking sponsorship.

As the 2006 season wore on, it was hard to pinpoint a clear title favorite. Johnson had won twice during Knaus’ exile with interim crew chief Darian Grubb, who would go on to win a Cup title with Tony Stewart and several races with Denny Hamlin and Carl Edwards. But Johnson lost a solid point lead after a disappointing run at Bristol Motor Speedway.

Kasey Kahne also had an early win and was in the mix at the top, along with 2003 champion Matt Kenseth. This was anybody’s game. Kurt Busch, reigning champion Stewart and Kevin Harvick put themselves in the conversation with spring wins as well. Dale Earnhardt Jr. had a solid year. Nobody was going to run away with anything, at least not before the third installment of the Chase for the Cup.

A new player emerged in early summer. Rookie Hamlin had never turned a lap at Pocono Raceway other than on a video game. He’d won his first career Xfinity Series race earlier in the year in Mexico City and had a pair of top fives in Cup, with a best finish of second at his home track Richmond Raceway. Whether he’d learned from the video games or just took to the track, Hamlin won the first Pocono race. And if anyone thought it was a fluke, Hamlin repeated at the Tricky Triangle later that summer. He made the Chase and finished an impressive third in the standings for the season. Heady stuff for a rookie, but the No. 11 team would go on to show they could win just about anywhere as Hamlin’s career progressed.

Hamlin wasn’t the only first-time winner in 2006; Brian Vickers scored his first win at Talladega Superspeedway in the fall. His win was a bit more controversial. While running third, he hooked HMS teammate Johnson into leader Earnhardt, sending both spinning as Vickers took the checkers.

As the title fight shaped up over the summer, there was one key player who would not be in it: Stewart. The 2005 champion missed the playoff field (then 10 drivers) and ultimately finished the season in 11th, though he won three of the final 10 events.

Kahne scored a series-high six victories, Stewart led the most laps and Kurt Busch started from the pole more than any other driver. Greg Biffle, not in the title hunt, won the season finale at Homestead-Miami Speedway for the third consecutive season.

At the end of it all though, Johnson won the Cup title. His championship wasn’t without controversy because of what happened in Daytona all those months ago, but the No. 48 team didn’t much care. His trademark in the coming years would be his ability to overcome adversity and win despite whatever was thrown at him. 2006 was the first in a stunning five-year run that would not see a champion other than Johnson. All told, Johnson has won seven Cup titles, joining Richard Petty and Dale Earnhardt as the only drivers to do so.

The white flag was in the air in Daytona. Johnson led, but all he could do was wait for Newman to make his move. Newman was sitting chilly, Mears the ace up his sleeve, waiting for the right time to move, to claim the first win of the season.

Turn 3. Newman wrenched his car to the right, taking the high side. He looked in the mirror and saw … nobody. Mears, knowing he’d finish second either way, held the bottom line and, as the caution flag flew for an incident behind the leaders, pushed the No. 48 to the win. The Jimmie Johnson Era had officially begun.