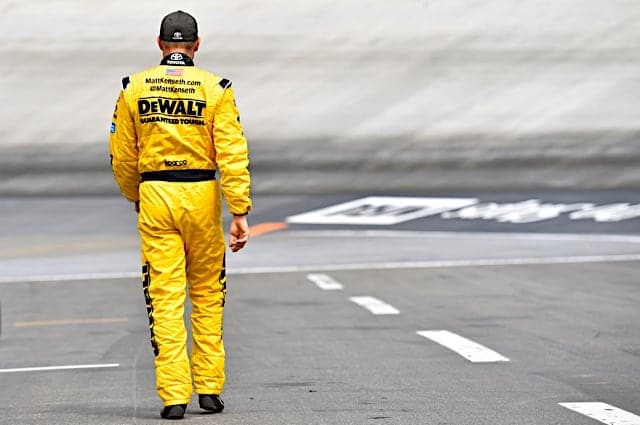 This week, Chip Ganassi Racing made a bit of a surprising announcement.

The news, first broken by Adam Stern of Sports Business Daily, will see the 2003 champion race in NASCAR for the first time since 2018, where he was brought onto the No. 6 Ford for Roush Fenway Racing on a part-time basis. Unlike then, however, Matt Kenseth will be running the rest of the schedule, and he’s not going to be evaluating talent/equipment like he was at Roush, which was more a referendum on Trevor Bayne than anything.

Kenseth will be looking to win his second championship, after NASCAR cleared his request for a playoff waiver. Which is a little ridiculous in that if this were a Front Row Racing team bringing back, say, David Ragan, no way does Ragan get a waiver, but the whole waiver system itself is dumb.

It would be better to just make rules that to be playoff eligible, NASCAR requires you to run half of the regular season (13 races total) and be top 25 in points. NASCAR would reserve the right to take playoff eligibility away, like if a driver deliberately skips a race without a medical reason or if somebody gets suspended.

I don’t think a driver should be playoff eligible if they’re missing over half of the regular season, but the first four races? It’s not really an issue, and they’re already in a hole anyway due to missing out on playoff points from potential wins or from not being able to finish in the top 10 of regular season points.

It’ll be very interesting to see how Kenseth does, especially since there will be no practice or qualifying for the first couple of races back. He’ll probably struggle in the first few races if his first laps back in a race car are the pace laps before 400 miles of Darlington Raceway, arguably the hardest oval to race at in NASCAR, but he should be fine after a couple races.

Some are skeptical of Kenseth’s ability to come back. Kenseth is a Cup champion, a two time Daytona 500 champion. He’ll be fine at 48 after a month to get his footing. And he’s running Hendrick engines with a team that finished sixth in points last year; he was able to drag the Roush No. 6 kicking and screaming to contending for a win at Indianapolis in 2018. There’s your answer on that.

What does this mean for CGR’s future?

So with that bombshell, now CGR’s lineup will be very interesting in the coming silly season.

The first question is what happens to Ross Chastain? He’s got plenty of experience now at all levels of NASCAR racing and Ganassi still “has plans” for him. If you’re going to pull the trigger, 2021 is the time to do that.

Before this entire situation happened, it seemed like Chastain was being groomed to take over Kurt Busch’s seat, whenever Busch decided to leave or retire. But Busch is signed through the end of next year, and now that Kyle Larson is out of the picture, there’s now a 48-year-old driver in the No. 42 Chevrolet who probably isn’t coming back next year.

Or maybe he does? You never really know with these things. Maybe Kenseth wins three races and finishes fifth in points. Does he really call it quits again after that? Ganassi’s hands would be tied in that situation, because at the end of the day, the key here is making Credit One happy. Why? Because we’re entering a recession, and it wouldn’t be a surprise if sponsors leave left and right after this season.

So now more than ever, the sponsor will be the key here, and if Credit One is happy with Kenseth, he’s back in that car next season if he wants to be. It happened with Mark Martin in 2009, which was a bad decision by Hendrick Motorsports because it lost a future Cup champion (Brad Keselowski), which led to the domino effect of Team Penske’s reemergence as a top team, while the No. 5 Chevrolet (now the No. 24 with William Byron) has won a grand total of six races in 10 years. But it really couldn’t do much when the second-best driver that year wanted to stay.

CGR could be heading into the 2022 season under that scenario needing two drivers, if Busch decides to retire after his contract expires. Who even knows what happens to that second car if Chastain takes one? The smart move would be trying to poach a Toyota or Ford prospect during the coming silly season, namely Chase Briscoe if Stewart Haas Racing doesn’t promote him. But a lot of things are going to be changing due to the coronavirus and the ripple effects it’s going to end up having on NASCAR in the years to come.

Who will come out on top in Dover?

Hey, NASCAR actually released all the relevant information for this week’s Pro Invitational Series race on time to be previewed in the column! That’s just dandy.

This week’s race at virtual Dover International Speedway will be 150 miles over 150 laps. The most interesting part of these races are during long green-flag runs, which is pretty common at actual Dover.

The same field from Talladega Superspeedway last week will be in this race, with the exception of Jeff Gordon, who has been replaced by Christopher Bell. With one quick-fix reset, the first half should be fairly wacky with the last half much more serious.

Dover is probably the fastest intermediate track when it comes to just how quick the closing rate is. It’s also the hardest pit road to get onto, with drivers having to slow down from 160 mph to 45 mph in a very short window compared to other racetracks.

The favorites for Sunday are probably the usual crew of Byron, Timmy Hill, etc. One driver who has done pretty well for himself in these races that not a lot of people are mentioning has been Ryan Preece. Richmond Raceway fiasco with Matt DiBenedetto aside, he’s been competitive in most of the races so far.

So, with NASCAR’s schedule announcement and subsequent FAQ/conference call, did they end up actually answering any of the questions you wrote about last week?

Nope, not really. Outside of confirming that drivers would get a medical waiver if they get sick with the coronavirus. Really makes me confident in how this is going to go!