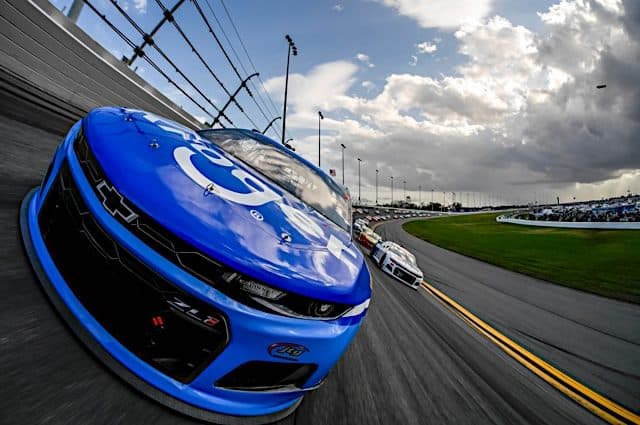 4 Burning Questions: NASCAR Needs to Answer Before a ‘Coronarace’

Editor’s Note: This column was originally posted on April 24, 2020. Since then, NASCAR has officially announced they’ll return to the track effective May 17 at Darlington Raceway. More details can be found here.

How exactly would testing work?

The first to throw their hats into the idea of NASCAR holding a race, beside Florida governor Rob DeSantis, was the state of Texas and racetrack Texas Motor Speedway.

I hope to announce the exciting details in the near future.

To prevent spread of #COVID19 it will be without fans.

But they will put on a great show for TV.

When asked about concerns about holding a NASCAR race during this current pandemic, TMS track president Not Humpy Wheeler had this response:

.@EddieGossage says that testing for people entering TMS garage would be taking temperatures (as opposed to coronavirus rapid swabs).

Yes, that’s right. Not Humpy Wheeler thinks that temperature checks would serve as tests for COVID-19. A virus that shows ample proof of being able to spread asymptomatically, or in other words, it can be spread before the carrier’s temperature goes up.

For the record, Not Humpy Wheeler, whose track decided to retweet this on Tuesday night, was quoted by The Athletic that he would be holding events with the input of “medical folk.” No specific “medical folk” were named in his quotes. Which would be a very important thing to know, considering he thinks temperature checks would be the key to holding a race.

If any racetrack decided that actual coronavirus tests would be the answer, there are two big problems with that. Number one would be that there are not enough tests in this country right now. We’re testing an estimated 143,000 per day, a laughably small number considering our overall population size of over 300 million people. We’re really going to take 500 of those tests so that we could have NASCAR races? This is the hill NASCAR is going to die on?

But let’s put all of this aside. Let’s say that Not Humpy Wheeler can wave his magic wand and get those 500 tests. That’s where the second test problem comes in: false-negatives. If I had coronavirus and tested for the disease, there’s a not insignificant chance of getting a false negative. Even if a racetrack could get its hands on the quick, top-of-the-line tests the White House uses, it would still be looking at a 15% false-negative rate. At best, there’s less chance of hitting a four on a dice roll. Now imagine rolling 500 dice and not one of them coming up as a four.

All right, let’s say the tests are foolproof, a 100% accuracy rate. Somebody tests positive. Now what? They had no interaction with their co-workers on the trip over there? What if a crew chief tests positive, then their car chief? What if a driver tested positive? These are questions that apparently decision makers are not asking themselves, because just taking temperatures with COVID-19 is the equivalent of putting a band-aid on a bullet wound.

Would local resources be wasted on a NASCAR race?

When a NASCAR race occurs, there need to be ambulances and EMTs on site in case of an emergency. The Ryan Newman situation two months is a perfect example of why this must be done.

Under this pandemic, that would be a waste of valuable medical resources. What’s more is that we’re beginning to see doctors and nurses getting infected with the disease, per NBC. So once again, these EMTs may be carrying the virus if they have to go out onto the track and assist a driver out of their vehicle, once again leading to possible transmission of the virus.

If a race happens with no fans in attendance, having known NASCAR fans, there’s no way there wouldn’t be a crowd outside of the track regardless while a race is going on. So racetracks would need police to be on patrol to attempt to enforce social distancing. aka, another local resource that would best be served elsewhere.

Basically, the idea of racing cars around an oval is an extremely selfish act on the part of NASCAR. People are dying in the thousands every single day from this virus, and yet they believe the rules shouldn’t apply to them. Right now, MLB and NBA are brainstorming ideas of how to save their seasons, but they’re just that — ideas. They haven’t outright lobbied for a return to normal, and that’s because they understand that the last thing this country needs right now is more strain on its medical system.

What about just the pure logistics end of it?

On Thursday, April 23, NASCAR teams finally got the go-ahead from the governor of North Carolina:

Governor of North Carolina says NASCAR teams CAN work in race shops as an essential business.

OK, that’s one fairly easy hurdle to jump over compared to actually holding a race. But it’s still a hurdle. For one thing, as per Fox Sports’ Bob Pockrass, most of the big teams are based in Cabarrus and Mecklenburg counties. One of them, Mecklenburg, just extended their stay-at-home order until May 9. And it’s definitely not a guarantee that that order isn’t extended again at some point.

Race shops are back in action though! Yay! Except that doesn’t constitute the entire industry. Road And Track reporter Bozi Tatarevic pointed out in a Twitter thread that there are a number of parts suppliers and manufacturers not based in North Carolina. Tatarevic in particular pointed out Toyota, which builds its TRD engines in California and then ships them to Joe Gibbs Racing.

There’s no chance California is opening up anytime soon, and I’d be extremely surprised if they deem racecar engines as essential business. There are workarounds; engines could conceivably be built for now in Joe Gibbs Racing’s old engine shop with a skeleton crew of people. But it’s not going to be easy whatsoever to just restart a top-of-the-line engine program for five racecars in just a month’s time. And that’s just one supplier out-of-state.

It has been very clear that NASCAR wouldn’t have a full, complete race if the sport comes back right now. Track time may be very limited, and there definitely would not be any live pit stops. At that point, why even come back from a competition standpoint? Anybody who wins a coronarace would have an asterisk next to their stats.

If you thought NASCAR fans were mad enough about Kyle Busch winning over 200 NASCAR races, just wait for him to win the coronaraces and just add that to his stat controversies. These wouldn’t be pure Cup events; they’d be fill-in, watered-down, potentially life-threatening races where there’s a competition caution every 20 minutes because there’s no live pit stops and they’re on a green racetrack with no tire wear.

How do you spin this to the public?

For the reasons above, it’s just an awful look in general for NASCAR to be running races during a global pandemic.

Look at the people who have promoted events or who have tried in vain to promote events. WWE was declared an essential business in Florida, and it got plenty of media criticism for that. It is also going to get a fair amount of heat for laying off a number of roster talents last week before reporting a giant first quarter profit this week, with the vast majority of its income being guaranteed television money.

UFC has been a complete circus. Short of Not Humpy Wheeler announcing the creation of Texas Motor Speedway Island, nobody is going to come out of this crisis looking worse than Dana White. Literally just Google “Dana White Coronavirus” and read all of the ways White has bungled this entire situation.

The disadvantage NASCAR has compared to those two companies is that it is perceived as being more legitimate than either of them in the eyes of the sports world, especially compared to pro wrestling. It’s less underground, with more high-brow sponsorship. While WWE was criticized, it’s fair to say that a NASCAR comeback would be criticized on a much larger level.

Instead of pie-in-the-sky ideas, what the industry needs to do is come together (not physically, of course) and lobby to Congress for a specific relief bill or provision. The money in this bailout would primarily go to race teams to stay afloat, as well as recently laid-off crew members who have nothing coming in.

While the industry would just join the chorus of lobbyist and special interest groups who have undoubtedly descended on Washington in the wake of this pandemic, they are in a very unique situation. Racing in general is made up primarily of small businesses; I don’t think half of the truck grid has more than 50 employees to their respective race teams. One side of the aisle loves NASCAR, while the other loves to help small businesses. It shouldn’t be that hard to make it work in Congress.

I’d love to get back to racing as soon as possible. But scheduling a race right now just isn’t realistic and definitely doesn’t take into account all outstanding factors. NASCAR should focus on trying to help its teams out during this crisis rather than contributing to the crisis, which would happen if it holds races right now.

Michael has watched NASCAR for 15 years and began covering the sport five years ago. He is a graduate of Salisbury University and a proud member of the National Motorsports Press Association (NMPA).
Previous Beyond the Cockpit: Erik Jones Likes That Old Time Rock &… Country
Next 4 Burning Questions: Is Matt Kenseth Ready for 2020 Cup Racing?