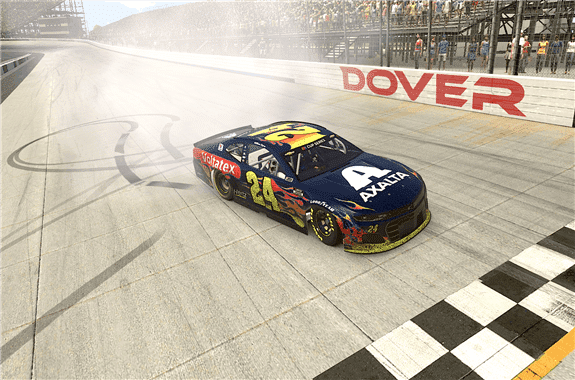 William Byron breezed to victory again Sunday, May 3 in the eNASCAR iRacing Pro Invitational Series. His latest victim? None other than Miles the Monster in the Finish Line 150 at virtual Dover International Speedway.

Byron outraced Christopher Bell and Timmy Hill for the win in the 150-lap event. It’s his third victory in this exhibition series created by NASCAR’s forced COVID-19 quarantine.

Byron previously won at Bristol Motor Speedway and Richmond Raceway. He’s now won three of the past four Pro Invitational Series events, eking past Hill in the closing laps to triumph at Dover.

“It was fun,” Byron said in his post-race interview. “We had to go on that restart. We had four tires…unfortunately, [with] the strategy we knew we were gonna be back in the pack…[but] once we got to Timmy, I knew we had better stuff.”

“I’ve enjoyed this iRacing series… but I’m ready to get back in my normal car as well.”

NASCAR once again tried to make the virtual event as realistic as possible. Actor David Hasselhoff sang the national anthem and singer Blake Shelton gave the command to start engines. Then, pole sitter Ross Chastain, in one of his final drives subbing for Ryan Newman at Roush Fenway Racing, led the field to green.

Chastain held the lead for several laps before Parker Kligerman took the top spot. Kligerman snuck past Chastain and outside pole sitter Garrett Smithley on his way to the front. Hill also scooted by into second before the first caution of the day flew.

Daniel Suarez got loose on the backstretch, hitting both the inside and outside walls before collecting a number of drivers. The pileup involved the likes of Kevin Harvick, Corey LaJoie, Brennan Poole and Matt DiBenedetto. Avoiding the wreck was Erik Jones, who practically drifted through the grass on the apron to escape damage to his car.

The field then made their first visit to pit road, with Denny Hamlin taking two tires to grab the lead for the restart. Hamlin led back to green, but that only lasted a few laps before more carnage. The Monster Mile produced more cautions in less than 30 laps  (two) than the fall 2019 Cup race here without stage breaks included.

This time, the wreck occurred between second and third. Hill held the inside line going into the first turn, and Kligerman turned down slightly, sending Kligerman’s No. 77 up into the wall. Involved in the aftermath was Kyle Busch, sliding sideways and tagging the back end of Kligerman’s car.

Update: In a first for me, got a post race call from a driver after an iRace. @TimmyHillRacer called me and we talked it over. Both of us were in the wrong there for lap 23.

Shortly thereafter, one of Dover’s notorious pileups claimed more cars. Kurt Busch got loose underneath Logano on the backstretch, hit the inside wall and spun back up into the pack. NASCAR on FOX in-race reporter Regan Smith was involved, along with Kligerman, Harvick and Chris Buescher.

The yellows gave Byron needed track position to sneak to the front. Byron swapped the lead with Smithley and Alex Bowman on the restart. All three virtual Hendrick Motorsports cars (add Jimmie Johnson) ran in the top five for several laps.

That short run was ended by yet another caution, with J.J. Yeley blowing an engine on the backstretch and causing a massive incident. Yeley’s No. 52 spun down into the lead pack, collecting Bell, Kyle Busch, Brad Keselowski, Ryan Preece and Suarez.

On the restart, Jimmie Johnson smacked the wall on the frontstretch, an incident that also involved Kligerman and Buescher. Byron and Hill led prior to the caution, and both continued to hold the top two spots from that point onward.

Finally, there was a decent green-flag run, and Erik Jones, Dale Earnhardt Jr. and John Hunter Nemechek began making their way towards the front, as did Bell and Hamlin.

Byron passed Hill for the lead with 50 laps remaining, and a caution flew soon after and brought the entire field down pit road. Suarez came up a little too far as he and Bowman raced out of turn 4, turning across Bowman’s nose and into the wall.

One more accident brought out the yellow flag – as Nemechek was being lapped, he got loose and forced Hamlin into the wall, involving the likes of Earnhardt Jr., Kurt Busch and Michael McDowell. The incident was supposedly payback for some contact earlier when Nemechek and Hamlin were fighting for position.

John Hunter Nemechek is going to try and wreck Hamlin on purpose. Watch out.

Hill, Smithley, Cassill and Chastain gambled by taking two tires and restarting on the front two rows with about 10 laps remaining. But once the green flag flew, Byron made short work of the latter three and set his sights on Hill. With Bell in tow, Byron passed Hill in the corner, then sailed off into the sunset to take the win.

All these victories could give Byron a boost as NASCAR heads toward its return on real racetracks May 17 at Darlington Raceway. The third-year driver still has yet to win a points-paying Cup Series event.

“Racing anything,” Byron said, “whether it’s a box car or anything with an engine, is going to give you confidence, especially if you’re winning. It’s a lot of fun for me, I’ve really enjoyed it.”

Hill’s third-place effort was his fifth top-three finish in the six Pro Invitational Series races so far. The only outlier is an 11th-place finish at Talladega Superspeedway.

“I wish I had a couple laps where William was held up on four tires,” Hill said. “I knew as soon as he got clear of those guys on two tires, I was a sitting duck.”

The next eNASCAR Pro Invitational Series event will take place at North Wilkesboro Speedway Saturday, May 9 at 3 p.m. ET. It will be the first event at the track on iRacing after virtual mapping was done in December. The former short track, which last hosted a Cup race in 1996, was then reconstructed for the online service.