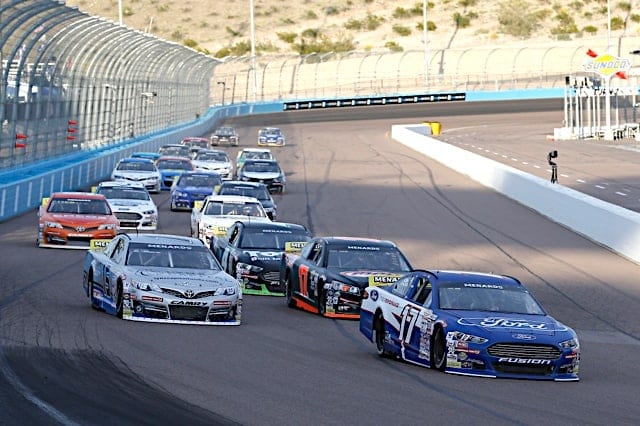 With NASCAR’s national series set to return May 17 at Darlington Raceway after a lengthy hiatus due to the COVID-19 pandemic, optimism within the sport and the overarching sports landscape has transitioned to something that has been foreign for almost two months.

Although the 17th is a long way away and we know much can change between now and then (see that tireless term “fluid”), NASCAR is going to try a restart. For the Cup Series (racing times four), Xfinity Series (times two) and Gander RV & Outdoors Truck Series (times one), life within the sport will get back to somewhat normal.

Finally, some much-needed competition and more importantly, income for race teams that have been in precarious positions since the shutdown began.

But while the national series will return to the spotlight, the ARCA Menards Series remains idle.

Although some of the rumored schedules that floated around last week included an ARCA event at Charlotte Motor Speedway, there was no mention of the series when NASCAR officially announced its plan to return on April 30.

“I expected to be getting the call or seeing the tweet that we were coming back when everyone else is,” Venturini Motorsports’ Drew Dollar told Frontstretch. “I had seen some schedules that had us included, but nothing official. Sitting back and waiting. I’m excited that [NASCAR] is going to try something, though.”

Three-time ARCA West winner and current DGR-Crosley driver Hailie Deegan, who’s currently quarantined in the state of California, a world away from the racing epicenter and DGR’s shop in North Carolina, feels her motive for, well, anything, has vanished.

“It’s weird how crazy the government can literally change your life instantly,” she said. “My racing career — I have none right now. I don’t know what to do with my life. My sole purpose I’ve made for myself is racing and I don’t know how to do anything else. It’s just weird, because what if the ARCA season got cancelled? Then what?”

“It’s so crazy, obviously I want to do everything we can to get back to racing, so we’ll do what we have to do and be a team player. I didn’t play stick and ball sports—I’m not used to this.”

Sam Mayer, who’s been quarantined at his home in Wisconsin, has been keeping busy racing go-karts to stay in race shape but is getting antsy to get back into the real car. That is, if anybody lets him know.

“I haven’t been in touch with ARCA at all. I don’t think they’ve been talking to much of anybody,” the defending ARCA East champion said. “I think they’re ready to go as well. Whenever we can get the chance and opportunity to get to a racetrack, I think they’ll go out there and do it.”

Daytona winner Michael Self, a veteran amongst a rookie laden field in the series, has a bit of a different outlook on the pandemic as a whole compared to his younger competitors.

“I guess it’s pretty shocking when you look at it on a macro scale,” the 29-year-old Self said. “How things have changed, how things will likely change in the future, the economy and the impact it’s had on jobs, it’s pretty awful. Pretty surreal. Every other major global issue that I can remember in my lifetime, I was probably too young for it to have any significant impact.”

The Venturini Motorsports driver recalled the economic recession in the late 2000s when he was a teenager, but admitted he was even too young then to grasp what it meant in the grand scheme.

“Now as someone who’s completely in charge of their own finances, has a big picture view of the world, you see how everything going on affects everybody and it’s just brutal,” he added. “Some mistakes have been made from the very beginning and things have kind of gotten mismanaged so now we’re in this position where we have this massive unemployment number, where people are protesting, wanting to go back to work, but people are saying we can’t do that due to the contagion rate of the virus, it’s crazy to watch it every day.

“Selfishly, my hope is that we can get past it, we can all get back to our jobs and be healthy while I can get back to racing and doing my job.”

Dollar, who resides in Atlanta, Ga., hasn’t noticed a distinct difference now that the stay-at-home order has been lifted.

“Nothing has really changed,” he said. “Restaurants are still doing carry out. I think one mall near me is open in Atlanta but I don’t think it’s crowded or anything. I think people are taking it into their own hands to stay inside even though states are saying it’s OK. I don’t see a big change yet, but we’ll see over the next few weeks.”

Whenever ARCA gets the ball back rolling again, it’ll be a much-needed resumption from a financial standpoint.

“The reason I understand why ARCA isn’t going to be back at Charlotte, I’m a little bitter about,” Self said. “Probably nothing that needs to be gone into detail, but I’d definitely say based off all the information I was given, I was very frustrated that our Charlotte date was taken away.”

Self mentioned there are plans to return to Charlotte later in the year, likely without fans as the national series will be. In the meantime, he would have loved to have shared the spotlight on television with Cup, Xfinity and Trucks to provide some well-deserved advertising to sponsors. The need is there especially with the elimination of in-person hospitality events, one that his primary sponsor, Sinclair Oil Corp, relies heavily on.

“Ideally, our viewership numbers go up and has a big impact for our sponsors (on TV),” he said. “Every one of them has been hit hard—brutally hard—throughout all this. For the ones that have stayed in there and have continued to support racing and bring their advertising dollars, the best thing we can do is give them the exposure they’re looking for.”

Despite the obvious health concerns amid the pandemic, each driver mentioned they’d feel safe and comfortable racing with the parameters put in place safety-wise.

“Racing is one of those sports that doesn’t require us being on top of each other,” Mayer said. “I’m definitely excited to get back going if we can in the next couple weeks, and I’ll be ready for it for sure.”

“For me, I’m just going to have to trust the guys who make the calls who are in charge,” added Dollar. “If they think it’s safe, then obviously they’ve done their research and will do the right things to keep the drivers and crew members safe.”

His teammate, Self, concurred.

“I would [feel safe], personally,” he said. “As long as everyone has been prattling social distancing, and the guys who I’m around at Venturini Motorsports have done what they had to (no cases), I feel confident about going, being smart, following the guidelines and getting back into it. I feel comfortable.”

Update: ARCA didn’t immediately respond to comment when reached out to by Frontstretch.