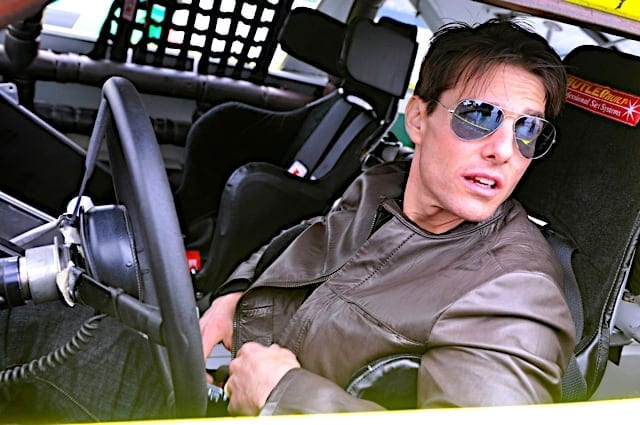 Thanks to the coronavirus, quarantine has provided everyone with a little more time to kill at home. Personally, I’ve spent that time catching up on some movies I hadn’t had time for before (for example, I marathoned every James Bond film in preparation for the upcoming 25th installment…quite an undertaking and one that left me somewhat exhausted).

Over the last five or six years, my interest in movies has grown exponentially, and the intersection of that with my passion for racing has yielded the discovery of a ton of films within this subgenre.

Not many of these racing films are prevalent – there’s the popular titles that have a reach transcending into mainstream audiences, like Talladega Nights or Cars, but there’s also a niche subset of films about racing that slip through the cracks – such as The Last Race or Born Racer.

In this multi-article series, I’ll take a look at the under-appreciated world of racing films and the hidden gems that lie on streaming services and the Internet. Documentaries generally tend to be the best genre for these movies, but there are several narrative features that shine through as well.

Up until a few years ago, I hadn’t seen more than 10 movies centered around racing, and my list now sits at an even 40. Thanks to the Internet and, more specifically, the film website Letterboxd, I’ve seen almost 30 racing films in the past year.

To be fair, there’s a few notable features I haven’t seen yet (Stroker Ace, Grand Prix and Le Mans among them) but I’ve definitely knocked many of the major titles off the list.

NASCAR has had its share of racing films since its inception, but the last few years in particular have been a boost for films centered around the sport I’ve been following for almost 20 years.

My grandfather introduced me to the sport when I was about three, passing on his love for auto racing after he himself raced in the 1950s, driving in amateur events up and down the East Coast. He was introduced to the sport by Virginia native Cal Johnson, who drove in a pair of Cup races in 1951, scoring top-10 finishes in both events.

The most bizarre backstory behind the early NASCAR films is that of 1972’s 43: The Petty Story, a chronicle of important moments in the Petty family’s lives. By the time filming began, Richard Petty had already won three of his eventual seven NASCAR titles, and according to a New Beverly Cinema article, the filming was done mid-season as the crew worked around Petty’s racing schedule.

A New York filmmaker then acquired the rights to the movie after it became a success, releasing it the next year under the title Smash-Up Alley. Although it received a national release, Petty’s involvement was downplayed and the poster was changed to more provocative artwork, the only references to the King being a small photo and some statistics.

NASCAR didn’t see much more action on screen until 1990’s Days of Thunder, starring the apparently immortal Tom Cruise as Cole Trickle. While co-starring with Paul Newman (more on him later) in Martin Scorsese’s The Color of Money, Newman’s racing escapades off the track drew Cruise’s attention and ignited his own passion for the sport, leading to his turn as Trickle several years later.

With solid racing sequences, vibrant paint schemes and good performances by leads Cruise and Nicole Kidman (as well as a number of cameos), Days of Thunder arguably became the go-to NASCAR film from the 20th century.

What followed was a run through the new millennium’s first decade of hit-or-miss features, kicking off with 2004’s NASCAR 3D: The IMAX Experience, which I vividly remember seeing in the IMAX theater dome right here in Richmond. Released in the same year was 3: The Dale Earnhardt Story, an ESPN TV movie featuring Barry Pepper as the Intimidator.

2006 is more or less the landmark year for NASCAR or pseudo-NASCAR movies – although only two were released. Cars and Talladega Nights: The Ballad of Ricky Bobby debuted less than two months apart and likely helped bring NASCAR to more mainstream audiences, with the respective draws of both Pixar’s animation and Will Ferrell’s comedy.

Aside from the two sequels to Cars (abhorrent and okay, respectively), another movie centered around NASCAR wouldn’t get released for more than a decade. Steven Soderbergh’s 2017 film Logan Lucky, while not specifically about the sport, focused on a heist set during the Coca-Cola 600, featuring sequences shot at the track during Memorial Day weekend and several driver cameos, among them Kyle Busch, Carl Edwards and Ryan Blaney. Boosting Logan Lucky further towards mainstream audiences was an all-star cast, consisting of Adam Driver (Silence, Marriage Story), Daniel Craig (the current James Bond), Channing Tatum (21/22 Jump Street, Foxcatcher) and Riley Keough (Mad Max: Fury Road, Under the Silver Lake).

As for the most recent NASCAR feature to hit theaters, 2019’s Blink of an Eye holds that distinction. Directed by Paul Taublieb and based on Michael Waltrip’s book about the 2001 Daytona 500, the movie documents the tragic end to that event and the events leading up to and after the race.

The most notable IndyCar/CART film Driven is still on my watchlist, but the last two years produced a pair of stellar documentaries about the sport. 2018’s Born Racer chronicled then-four-time champion Scott Dixon’s pursuit of a fifth title in 2017, following the Chip Ganassi Racing driver’s season as he fell just short of catching eventual champion Josef Newgarden. The film’s most impactful moments come as Dixon and other drivers ponder exactly what they do for a living and why they do it – and, of course, Dixon’s horrifying crash in that year’s Indianapolis 500 and his recovery period afterward.

IndyCar’s other recent feature was released in 2019, a documentary exploring the history of medical teams in the series and their role at the tracks. Rapid Response showcased interviews with emergency staff, such as the famed Dr. Steve Olvey, as well as drivers involved in serious accidents during their careers.

Meanwhile, Formula 1 has arguably two of the best racing films ever made in its repertoire, 2010’s Senna and 2013’s Rush. Senna’s exclusive utilization of archival footage and voiceover-only interviews, as well as its chronicling of Ayrton Senna’s life and death, elevates it into another stratosphere of documentary filmmaking. Ron Howard’s direction of Rush, from the racing sequences to the drama that unfolds between James Hunt and Niki Lauda, makes the 2013 film one of my favorite movies and an exhilarating watch – Chris Hemsworth and Daniel Brühl’s performances bring their storied rivalry to life.

In recent years, the releases of Williams (2017) and A Life of Speed: The Juan Manuel Fangio Story shed light on a pair of F1 icons – the Williams racing team and their owner, Sir Frank Williams; and the legendary Juan Manuel Fangio, considered by some to be the greatest driver of all time.

The majority of racing movies document sports car racing, endurance motorsport and sometimes span several disciplines. The best of this category, by far, was released last year under the title of Ford v Ferrari, a dramatization of Ford and Ferrari’s rivalry leading up to the 1966 24 Hours of Le Mans. Starring Matt Damon and Christian Bale, it’s an exhilarating ride that won two of its four Oscar nominations.

Other notable movies in this subset include McLaren and The Green Hell, which along with Williams make up my self-dubbed “Big Three” of 2017 racing films. McLaren depicts the life and untimely death of innovator and racer Bruce McLaren and his lasting legacy, while The Green Hell documents the history of the Nürburgring, the world’s largest racetrack that winds through the forests of Germany.

Huge credit has to be given to the duo of actor Adam Carolla and producer Nate Adams, who together have made four films in the last five years centered around racing. Winning: The Racing Life of Paul Newman, released in 2015, looks at the Oscar-winning actor’s life off the silver screen and how his interest in racing happened to be sparked by a film role – Newman went on to race until he was 83 years old.

The next year, the pair released The 24 Hour War, a film that flew under my radar until Netflix added it after the release of Ford v Ferrari, making for an entertaining Friday-Saturday double feature. Carolla and Adams’ next two films, Shelby American in 2019 and Uppity: The Willy T. Ribbs Story in 2020, both premiered on Netflix. The former was a look at the iconic Carroll Shelby’s life and career, while Ribbs’ documentary was a fascinating, yet heartbreaking story of his struggles in the racing world, as discrimination impacted his career despite his clear talent in a racecar and magnetic personality.

Additionally, 2018’s The Last Race documented a small track in Long Island and its owners’ struggle to keep racing alive at the venue. It is among my personal favorite racing films – its extended sequences of on-track action, with cameras mounted on and in the cars, are enthralling and captivating.

As a whole, the last decade has been a golden age for movies about racing, with more than 30 released in that span of time – 2019 alone had at least 10 between TV documentaries and feature films.

No single article could ever document every racing movie’s significance, but I hope to highlight the best and most underrated over the course of this series. Happy viewing!

I enjoyed Rush very much. I haven’t seen Senna or Ford vs Ferrari but they are on my list to see. As I am not a fan of Will Ferrell (yeah yeah I know) I totally skipped seeing Talladega Nights. We were at Charlotte when they were filming shots of the track for it years ago though.

I liked 24 hrs of LeMans, enjoyed the Paul Newman film.