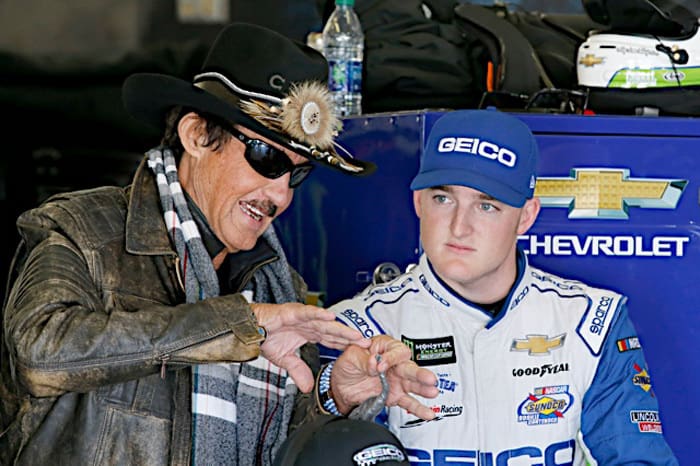 Richard Petty. David Pearson. They’re NASCAR’s most legendary rivalry—and there’s no other pair of drivers to begin a month of classic matchups with than the two winningest drivers the sport’s top series has ever seen.

In Driver vs. Driver, we take a look into the careers of the sport’s greats and not-so greats. The rules are simple: drivers’ careers must overlap, and they must have something in common that makes comparison not only valid but also inevitable.

This month, we delve into those classic questions: Petty or Pearson? Petty or Dale Earnhardt? Earnhardt or Jeff Gordon? Gordon or Jimmie Johnson? From the pre-modern era into the 21st century, there really are no winners; that’s up to the ages to decide. But there sure are some great battles.

Richard Petty and David Pearson faced each other and the field in 551 races between 1960 and 1986. In those races where both started, the pair combined for 205 wins, more than a third of the races they contested. Head-to head, Petty finished ahead of Pearson 290 times, with Pearson besting Petty in 261 races.

Who ranks as the best of that era? Here are arguments for each from Adam Cheek for Petty and Michael Finley for Pearson.

In the summer of 1951, an unassuming 20-year-old named Richard Petty finished 17th in his first-ever NASCAR race, a 500-mile event at the Canadian Exposition Stadium in Toronto, Ontario, that his father Lee won. Petty ended up finishing third from last due a crash just after the halfway point of the race and went on to record an average finish of about 20th over nine races that season.

10 years later, he had 75 wins under his belt along with two championships, going on to win 125 more races and five additional titles, not to mention becoming the sport’s most legendary icon.

Petty’s career in NASCAR spanned 35 years of competition, nearly 1,200 races and more than 300,000 laps, retiring at age 54. His famed No. 43 now rests under ownership of his own team, piloted by Bubba Wallace, and the iconic Petty blue livery is a constant in a sport of ever-changing paint schemes and sponsors.

Those 35 years are single-handedly the biggest reason he has become the foremost figure in the sport’s history.

Meanwhile, the 200 Cup Series wins amassed by the King is a mark that will never be topped. Petty’s first nearly full-time season in the sport (1960) saw him visit victory lane three times, and 30 of the 40 races that season had Petty in the top 10 when the checkered flag flew.

In 1965, after joining a boycott and sitting out most of the schedule, Petty still managed to win four of the 14 starts he made in the season’s latter half.

1967, though, defines his prowess behind the wheel. Starting 48 of the 49 scheduled Cup events that season, Petty reeled off 27 wins, including a 10-race win streak late in the season that stretched over nearly two months’ worth of events.

Winning more than half the races in a season of nearly 50 such events was unheard of before 1967 and similarly unheard of afterward; no other driver before or since has cracked 20 wins in a season, and even hitting the double-digit victory mark is exceedingly rare. Petty didn’t just crack the minimum double-digit amount – he eclipsed it, shattered it.

The King replicated the feat four years later with 21 victories in 1971. He retired with eight seasons of double-digit victories, more than any other driver; no other racer has managed more than five. Dale Earnhardt and Jimmie Johnson had just one apiece, Jeff Gordon had three and Pearson recorded five of his own.

The variance of eras and competition undoubtedly play into statistics like these, but the fact that a driver was able to manage this pace for so long is what makes his career stand out as the greatest of his era.

Between 1960 and 1980, Petty only failed to win a race in just one season, winning at least two in every season but 1978 after a rash of mechanical failures. Even with a constantly changing schedule and number of races, his 591 top-10 finishes divide out to 28.1 per season and overall stacks up to nearly 600 top-10 efforts in just over 800 starts in that time span.

The fact that Petty was able to keep up such a consistent pace over two decades behind the wheel is something few can match.

Additionally, his presence in the sport after his career has been a constant since his retirement. His team ownership extends to this day, and the family’s lineage – Kyle and Adam Petty – continued racing for years. Since the beginning of his driving career, Petty’s involvement has lasted for more than 60 years.

Whether it’s the consistency during his prime, the iconic statistics that are ingrained into fans around the world or the unmatchable, legendary status he achieved during and after his career, there’s no doubt that Petty is the greatest driver the sport ever had – and will ever see. ~Adam Cheek

First off, allow me to start my argument off by pointing out that Pearson only ran four seasons where he competed in 85% or more of the races and won three championships. Try to find anybody else in any sport with a 3:4 championship ratio.

The numbers do not work out in Pearson’s favor. However, those are just numbers; they don’t really mean anything without understanding the circumstances of how they were generated. Like the number eight. I like the number eight, but it doesn’t mean much without context. For example, eight is the number of races Pearson won without Petty in the field, out of just 23 starts. The King won 93 races without Pearson in the field, a huge number without a doubt, but due to context, it doesn’t mean as much as the eight. Why? Because Petty had 633 starts without Pearson in the starting lineup. One-in-six is much less impressive than one-in-four, even with the much smaller sample size Pearson had.

What’s more is that the head-to-head battles between the two happened during the entirety of Pearson’s career, while Petty had already been in NASCAR Cup Series racing a year prior to Pearson’s first start and Petty had six more years of really just showing up every week after Pearson’s final race.

In the 1960s, corporate sponsorship really wasn’t a huge source of income. Rather, most of the big teams were either owned by or received the bulk of their income from car manufacturers. Nobody was better off than the Petty clan; as usually the only team Chrysler was actively supporting, Petty Enterprises had a ton of money to dump into Petty’s No. 43. Meanwhile, Pearson had to share resources with the other Ford teams.

When Petty went to Ford in 1969, which would be akin to Hendrick Motorsports switching to Toyota in 2020, guess what happened? Well, in 48 starts against each other, Petty had one more win than Pearson, but Pearson had nearly double the head-to-head wins and dominated Petty in every other statistical category. And that’s with the two on equal ground, with Petty maybe having an edge due to just how much money Ford invested in him to switch over.

After 1969, Pearson never ran a close-to-full-time season ever again — partially due to wanting to slow down, partially due to Ford pulling out of the sport in 1970. Drivers also really didn’t have very long careers; nobody was still active who was around for the Cup Series’ inaugural season 21 years earlier besides Buck Baker on a very limited basis. After all, he had already won three championships, which tied him with Lee Petty for the most of all time.

Read that sentence again. Yes, when Pearson retired from full-time competition, he had one more championship than King Richard. He had already outclassed him; in hindsight that wasn’t the case, but at the time, Pearson probably felt he didn’t really have anything left to do besides winning a Daytona 500, and as he proved in 1976, you don’t need to be full time to accomplish that.

In 1972, Pearson and the Wood Brothers began a seven-year marriage that ended in early 1979. From 1972 to 1978, Pearson and Petty raced each other 141 times, practically all of Pearson’s tenure with the Wood Brothers and where he got all of his race wins with the team, ironically 43. Petty in that time frame won only 28 races when Pearson decided to show up. Pearson had the edge in head-to-head 80-to-61 and had 14 more top-five finishes than Petty. He had one less top-10 finish and a worse average finish than the King in those 141 starts, but Petty was running for a championship and put more obvious value into having good point days, while Pearson was just trying to win every race and didn’t care about finishing eighth instead of 14th.

Finally, let’s look at one-two finishes. Petty and Pearson finished one-two in 63 races. That’s the most of any pairing of drivers in history. And who has the edge? Why, it’s the Silver Fox, with a 33-30 edge to the King. Can’t get much more head-to-head than that.

Saying Petty is better than Pearson is like saying Wilt Chamberlain was better than Bill Russell. Sure, Chamberlain has the numbers. But Chamberlain couldn’t get past Russell in the 1960s in games that actually mattered, namely championships and playoff series. If Pearson, like Russell, cared enough to go after Chamberlain’s records, he would have broken them. But he didn’t, because, in Pearson’s case, he didn’t want to be on the road away from his family for 30-plus weekends for over 30 years. If he had, those big Petty numbers definitely would not exist.

If you still haven’t made your decision, there’s an easy way to figure it out. Go watch the ending of the 1976 Daytona 500 on YouTube. Watch these two drivers wreck coming out of the last turn of the last lap. And take notice of Pearson putting his foot down on the clutch, allowing him to shift into first gear after wrecking and pass Petty for the victory in the greatest finish in NASCAR history. It’s one of the most savvy moves in all of racing, the ultimate checkmate. And a win, for both the race and this debate, fitting for the Silver Fox. ~Michael Finley

Petty’s first CUP race was July 18, 1958. It was 100 laps and his father got $575 for the win and Richard got $115. It was his second race ever and his first was in a topless car a little earlier. I was at the last event at the track in 1966 won by Bill Rafter who participated in the races in Toronto and the NEXT NIGHT in Buffalo in 1958.