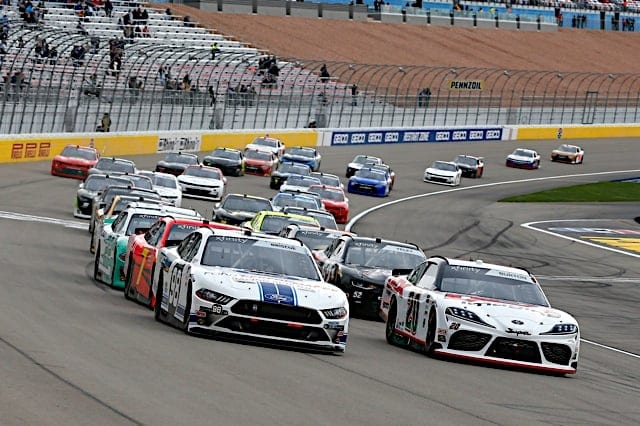 Last Thursday (April 30), NASCAR announced the 2020 NASCAR Xfinity Series season would resume at Darlington Raceway on Tuesday, May 19, in its first of two races at the venue this season. The track will also host its scheduled Labor Day Weekend event.

While there are many opinions on whether NASCAR should return and be among the first professional sport entities to return during the coronavirus pandemic, the situation allows for many new eyes in the sports world to focus on racing. When was the last time that happened?

Sure, the Daytona 500 always pops a nice rating, but Darlington? The Cup Series rating on May 17 – NASCAR’s official return to the track – is going to be huge. Some of those new eyeballs could trickle down to the Xfinity race, two days later. And then the same could happen the following week at Charlotte Motor Speedway.

Race days will look different for the foreseeable future. Having weekends full of activities, including multiple practice sessions and qualifying are gone. Those will come back over time, but to make sure everyone is having as little exposure as possible, NASCAR is holding one-day shows with races only, except for the Coca-Cola 600 at Charlotte on May 24.

NASCAR has worked with medical experts through the duration of the racing hiatus. The sport will continue to do, making sure everything and everyone at track is as safe as possible. Track properties at upcoming venues will be used to its full capacity, as race haulers will be spread out throughout the infield, using both the garages and driver-owner motorhome lot to assemble their cars.

Teams are only allowed to bring 16 crew members (including driver, crew chief and spotter) to the racetrack. Frankly, some teams don’t even have that many employees.

Though there will be no fans in attendance for these events, the hype of being the first sport back is real, and drivers and team owners alike can feel it in the sport’s top preliminary division.

“I’m super excited to go back racing,” Brandon Brown, who sits 12th in the Xfinity Series standings, told Frontstretch. “It’ll be nice to get back out doing what we love. One thing that I’m nervous about as we are going back to a fairly difficult track with no practice and no qualifying, and there’s a few rookies that have never turned a lap at (Darlington) and they’re going to be starting near the front.”

An escape is what many people in the real world need. Life without any sports can be quite boring, so NASCAR will give the world a form of entertainment, sooner rather than later.

Jeremy Clements’ South Carolina-based team was able to work longer than other Xfinity organizations that are located inside the Charlotte hub. He, too, is ready to get back to the track and improve on his points ranking of 25th.

“I’m definitely thrilled to be able to get back to the racetrack and hopefully put on a good show that our country needs,” Clements said. “I’ve been smiling a lot since the official announcement. This break was something that we didn’t see coming and we have been able to catch up after a rough start to the season. We’re ready to put that behind us and start reeling off some top 10s. It will be so cool to race at Darlington with no practice or qualifying. That should put on a good show.”

Prior to a meeting with NASCAR last Thursday morning, many Xfinity team owners didn’t know when the series’ first race back would be. There were multiple leaked schedules online, but no official statement from the sanctioning body to owners in the series.

Johnny Davis, owner of JD Motorsports, had to furlough all 27 of his employees when the pandemic hit. Quite simply, he didn’t have the funds to continue paying employees and still have a race team upon returning to the track. He did, however, go out of his way to make sure his employees were safe over the past eight weeks.

Obviously Davis is amped for NASCAR’s return, the sport he’s dedicated his life to for nearly 40 years.

“As the owner of JD Motorsports, I am very excited at what NASCAR has done to get the Xfinity Series back in operation,” he said. “Very excited to be able to bring all our employees back and getting life to somewhat of a normal way as we knew it.”

Martins Motorsports, ran primarily by Tommy Joe Martins, had to lay off four of five employees after the postponement of the race weekend at Atlanta Motor Speedway on March 13.

Even though little work could be done over the last two months, Martins says the team is prepared to return to the track.

“We’re ready for it,” Martins stated. “We’ve been trying to safely prepare over these last few weeks, thinking that the time was coming and now that it’s here, I’m just relieved more than anything.

“It’ll be bizarre to have all these regulations in place and no fans around, but I know we’re all going to make the best of it.”

On the flip side, Sam Hunt Racing, running a part-time schedule is in a precarious situation. Colin Garrett, primary driver of the No. 26 Toyota, qualified for the season finale at Homestead-Miami Speedway last season, making him eligible to run at Daytona this season. Unfortunately, the team was the first car to miss the show at the 2020 season opener.

The team has no owner points, meaning if 36 cars were to show up to the racetrack and there is no qualifying session (there have been at least 36 cars at all four events this season), Hunt’s team would go home based on the rule book.

That doesn’t sit well with Hunt, as all he wants is “the chance to qualify,” having already purchased engines for races that were scheduled at Homestead in March and Bristol Motor Speedway in early April.

“We’re in a possible tough spot depending on how they end up setting the field,” Hunt said. “The reason we are part-time this year is to race hard when we do spend the money to go. If we wanted to start-and-park we would be there every week.

“Our agenda is different than others, we aren’t showing up just to collect purse money. We’re trying to build a professional, competitive program from the ground up with long-term partners. We just want the opportunity to race and keep our company alive and progressing.

“Being ineligible to show up because of the no qualifying format would be a slight shot to the gut, but we will by no means let it dictate the fate our our young program for the rest of the year.”

Regardless of if the format NASCAR has elected to go with is fair to all organizations, the sport needs to make up races in order to be healthy for its future. And that it will do, beginning with the Cup race on May 17 and in 12 days for Xfinity.