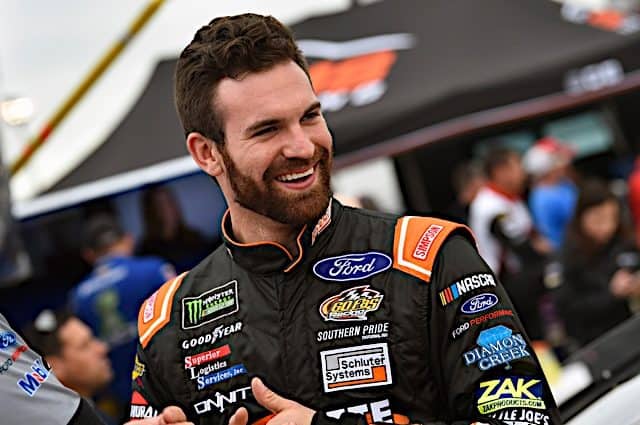 In this week’s edition of the Frontstretch Podcast, Dustin Albino and Mike Neff elaborate from last week’s show regrading NASCAR returning on May 17 at Darlington Raceway.

William Byron was victorious again in the Pro Invitational Series while creating a virtual rival out of Landon Cassill. Will these rivalries from iRacing spill over to the real track?

With ESPN airing The Last Dance, both Albino and Neff list five drivers they’d like to have seen have a documentary series filmed over the duration of their careers; spanning from Jimmie Johnson to Curtis Turner, Jeff Gordon to Ken Schrader and beyond.

Finally, Corey LaJoie joins the podcast to discuss NASCAR’s return to racing, the mentality of racing 1,600 miles in 11 days and fatherhood.

Support for the Frontstretch Podcast is brought to you by Manscaped, who is the best in men’s below the belt grooming. Get 20% Off  and Free Shipping, with the code Frontstretch at Manscaped.com

Dustin joined the Frontstretch team at the beginning of the 2016 season. 2020 marks his sixth full-time season covering the sport that he grew up loving. His dream was to one day be a NASCAR journalist, thus why he attended Ithaca College (Class of 2018) to earn a journalism degree. Since the ripe age of four, he knew he wanted to be a storyteller.
@@DustinAlbino
Previous Eyes on Xfinity: Excitement Upon Returning to Racing
Next Anthony Alfredo on iRacing, Driving for Legends and “Fast Pasta”