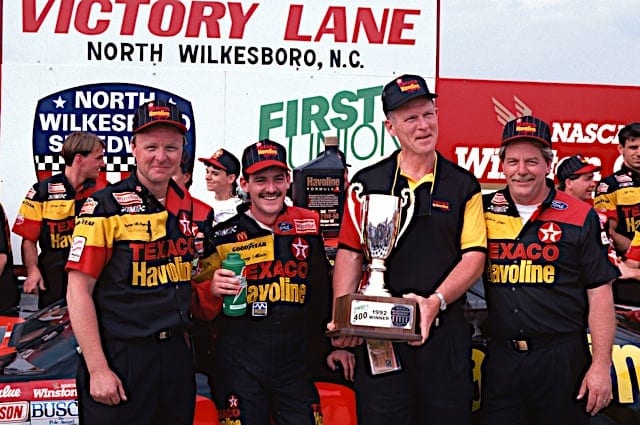 It’s almost time for real racing! Before teams head out to Darlington Raceway, though for NASCAR’s Cup Series return on May 17, 2020 there’s one more eNASCAR iRacing Pro Invitational Series event. They saved the best for last in this exhibition series; this week, drivers will compete at the virtual North Wilkesboro Speedway Saturday (May 9) at 3 p.m. ET.

This finale marks the track’s debut event on the platform. Since no one has competed there on iRacing, it will be interesting to see who will rise to the top. Two of the drivers entered, Bobby Labonte and Jeff Gordon, did race at North Wilkesboro in real life. In fact, Gordon won there in 1996 and will use that same Rainbow Warrior paint scheme this week.

A few races ago, NASCAR shook up the rules for the iRacing starting order, and that will continue Saturday. The top three finishers from Dover International Speedway — William Byron, Christopher Bell and Timmy Hill — will drop to the rear. However, Byron isn’t racing this week as he is preparing for the races at Darlington and Charlotte Motor Speedway. Just Bell and Hill will automatically start at the back.

Also, the top 10 qualifiers will invert in this lineup, meaning the fastest driver will start 10th and vice versa. Be sure to check the starting lineup before the race to see who will start in the front. These are more likely to lead laps, a key component in daily fantasy.

FanDuel is offering some daily fantasy contests on their site, including tournaments and some cash games. Drivers will earn points based on their finishing position as well as bonus points for laps led (0.25), fastest laps (o.40) and laps completed (o.10). FanDuel will also subtract 0.10 points each time a driver has an on-track incident. Keep that in mind when crafting your lineups!

Those outside Arizona, Hawaii, Idaho, Louisiana, Montana, Nevada and Washington may deposit and enter paid contests on FanDuel.

DraftKings also has tournament and cash contests open for Saturday’s race. The biggest difference between DraftKings and FanDuel scoring is that DraftKings adds or subtracts a point for each position gained or lost on the track. Unfortunately, qualifying is expected to start right before the main event, so it may be difficult to adjust your lineups in time. DraftKings acknowledges this issue and says it may adjust the start time of its contests until after the starting lineup is known. The race is currently scheduled to go green around 3:10 p.m. ET, so keep the quick turnaround in mind should you plan to make any changes.

If you’d rather play for free, check out the following sites and apps.

The NASCAR Finish Line app is on iOS and Android devices for those 21 and over. In this game, you can choose the top-finishing driver from four options. After picking six drivers (one from each group), you will then predict who will place first and second in Saturday’s race. According to the app, the top 100 fans win a guaranteed prize while those who earn 500 points win or split the $5,000 jackpot.

Similarly, the FOX Bet Super 6 app is free to play and awards a $5,000 jackpot to those who get all six correct. If no one gets all six right, then $1,000 will be split among users with the next highest correct picks. This week, the app has Kevin Harvick, Dale Earnhardt Jr., Denny Hamlin, Kyle Busch, Martin Truex Jr. and Hill.

You can choose where you think each driver will end the event by sliding the bar under “Finish Place” to the range you want. Positions one-30 are separated in increments of five, while 31-40 is the final range.

Now, here are this weekend’s fantasy and prop picks.

Hill is the obvious choice with Byron out for the series finale. Why? Well, Hill’s finished inside the top five in all events except at Talladega Superspeedway (where he was 11th). That’s a pretty incredible feat! But in reality, the streak isn’t all that surprising when you look at his iRacing history. In over 1,600 sim starts, Hill has earned just over 1,200 top fives. No one else in the field even comes close to that percentage (over 70).

Though Hill will have to start at the back, his iRacing experience should help him move quickly to the front. He will definitely be popular on DraftKings where place differential is so important. Hill is the most expensive driver on both FanDuel and DraftKings, but he’s probably a price worth paying. Read further below for some cheaper options to pair with him.

Hamlin doesn’t have quite as many virtual starts as Hill, but he is still well-rounded. The Virginian won the inaugural Pro Invitational Series event at Homestead-Miami Speedway and finished fourth at Bristol Motor Speedway. Additionally, the No. 11 Joe Gibbs Racing driver was sixth at Richmond Raceway and the Monster Mile. As you may recall, he had a run-in with John Hunter Nemechek late in the race last week but rebounded to a solid result. Though Hamlin is highly priced on both daily fantasy sites, he could be a good alternative to Hill if you need the extra savings.

Hamlin’s teammate Bell also had a good result last week and is a nice option if you wish to use him.

Earnhardt was looking to finish well at Dover but unfortunately ran into Hamlin and suffered major damage. Still, he was eighth at Richmond and nearly won Homestead. His iRacing experience is phenomenal — Earnhardt ends 80% of his races inside the top five. Since Earnhardt generally tends to qualify well (he started fourth last week), NASCAR’s former Most Popular Driver has a good chance to lead some laps early on. Plus, his father won at North Wilkesboro five times; what better place to win than at this historic track?

Jones, like his JGR peers, has performed much better each week. He offers nice place differential upside on DraftKings, too, running fourth at the Monster Mile after starting 31st. Also, at Richmond Jones qualified 24th and ended the day in seventh. He’s $8,000 on both FanDuel and DraftKings, so you can afford to pair him with Hamlin or another more expensive racer. Even though Jones is not as seasoned on the sim, his improvements are hard to ignore.

Like Jones, Almirola earned a solid finish (10th) after qualifying 27th at Dover last week. However, he only has two starts in this series, which places him at a higher risk. Even though Almirola’s less-experienced, last week’s result proved he learns quickly. Hopefully, the No. 10 Stewart-Haas Racing pilot can take what he learned onto a new course.

Almirola’s low price in daily fantasy also allows you to place someone like Hill or Hamlin in your lineup.