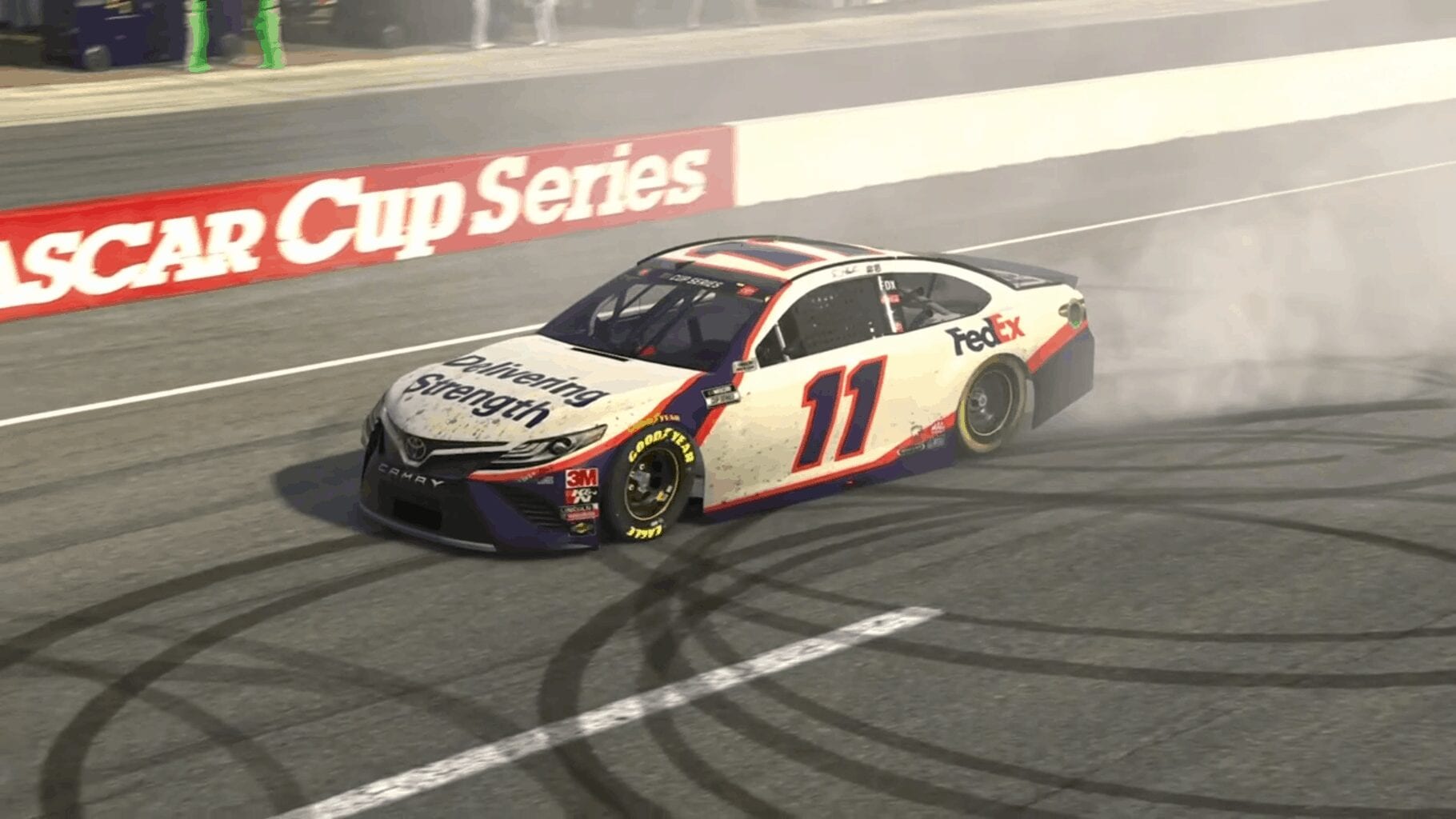 With the Pro Invitational Series coming into existence due to quarantine for the coronavirus, Hamlin kicked off the virtual division’s existence with a win at Homestead-Miami Speedway. He added a few top-10 finishes at successive races before visiting victory lane again in Saturday afternoon’s finale, recovering from an early crash to make his way towards the front in the North Wilkesboro 160.

The Cup Series hasn’t visited the actual speedway since the final race there in 1996, but a scanning effort led by Dale Earnhardt Jr. last December helped the track make its way into iRacing.

Earnhardt Jr., Jeff Gordon and Bobby Labonte were the only drivers in the field to have raced at the track during its time hosting races, with Gordon having won the final Cup event in 1996.

Cup Series rookie Cole Custer started from the pole, leading a field filled with throwback paint schemes to the green flag. Facing early competition from outside polesitter Ryan Preece for the lead, Custer managed to hold the top spot until the first caution flag flew, but eventually lost the lead to Preece on the restart.

That first caution was brought out on lap 5, after Hamlin bumped John Hunter Nemechek on the exit of turn 2. The wreck involved both Hamlin and Nemechek, as well as Martin Truex Jr. (in his first iRacing event), Landon Cassill and Erik Jones.

With Ross Chastain and Garrett Smithley battling for second behind Preece after the restart, the next caution flag flew on lap 30 as Timmy Hill hooked Michael McDowell. The contact sent McDowell’s No. 34 and Jones’ No. 20 spinning.

After the first pit stops of the day, Chastain inherited the lead but lost it to Preece soon after, as a Custer spin brought out the yellow flag and stacked the field back up.

Preece began to check out, extending his lead to as much as a straightaway before a Chris Buescher accident sent the cars to pit road for another round of stops. Strategy scattered the field, bringing Christopher Bell and Earnhardt Jr. to the front row – Bell had methodically made his way towards the lead, needing less than 50 laps to get into the top 5.

Nemechek’s second incident of the day came as he dove into the corner, colliding with Chastain and Joey Gase. Contact between Smithley and Brennan Poole then brought out another caution, with Smithley spinning in the turn and getting tagged by Kyle Busch. The ensuing chaos collected Parker Kligerman, who spun up into the wall as well.

Bell led the field back to green, but a lap 75 caution for the “Big One” less than two laps later reset the field again. Cassill hit the curb at the bottom of the fourth turn, sending his No. 89 sliding up the track and into oncoming traffic. Hill hit the end of the pit wall head-on while trying to avoid the wreck, while the crash also collected Hill, Poole, Tyler Reddick, Austin Dillon and NASCAR on FOX in-race reporter Clint Bowyer.

Two more cautions in less than 15 laps shook up the running order, the first an incident involving Kligerman, Dillon, Jones and Labonte – the ensuing pace laps also featured Corey Lajoie‘s exit, when his real-life brake pedal broke. Chastain led the field back to green, followed by Hill and Cassill.

The latter caution resulted from Nemechek’s involvement in another incident with just 25 laps remaining, as he was turned by Bowyer as they dove into the first corner. Bowyer and fellow FOX in-race reporter Gordon were both collected, as were Gase and Custer.

The final restart came with just 15 laps left, the rest of the race unfolding without any further cautions. Chastain led the way, with Hamlin and Hill were closing in behind him.

Those final 15 laps weren’t without their incidents, however – Truex Jr. and several other cars wrecked just two laps after the restart, but all drove away and the race stayed green.

Hamlin drove to the back bumper of Chastain’s car, challenging the No. 6 for the lead as the laps wound down. Contact between the two cars allowed Hamlin to poke his car under under Chastain, passing the fill-in driver for Roush Fenway Racing sliding up the hill as Hamlin – and then Hill – went by.

Chastain was then caught up in a crash just after the contact, wrecking with Cassill and Earnhardt Jr. with less than 10 laps to go. No caution was thrown, allowing Hamlin and Hill to decide the race as the laps waned. Hill tried to close the gap on Hamlin, but couldn’t get near enough to attempt a pass as Hamlin cruised to victory.

“I knew we had the fastest car,” Hamlin said in his post-race interview. “It’s just getting through traffic, we got into that early incident and had to use the fast repair right off the bat.”

Hill, Reddick, Chastain and Dillon rounded out the top five, but the action didn’t end at the checkered flag – Chastain punted Hamlin’s No. 11 on the cool-down lap, apparently in retaliation for their first-place battle.

“Two guys going for the same spot,” he added of the battle with Chastain. “I got a good run on him off of turn two…he pulled down the straightaway to try to block and we just pulled off the gas on the same time.”

“I can’t wait to get back [racing]…this has been a lot of fun,” Hamlin said.

On-track action will resume next week as NASCAR makes their return, visiting Darlington Raceway for their first race since the coronavirus postponement. The Cup Series’ 400-mile race will take the green flag shortly after 3:30 p.m. on Sunday, May 17.

Was hoping high profile drivers would shame SMI to either fix it or sell it. Not holding my breath though.

Mike I couldn’t agree more, however the drivers know you can’t bite the hand that feeds you or you might be getting the “secret” fine.
I thought If anyone would have said something it would have been Clint Boyer because he’s so out spoken.
Something tells me that they were told not to focus on bringing the track back but we’re allowed to state how fun it was on IRacing.