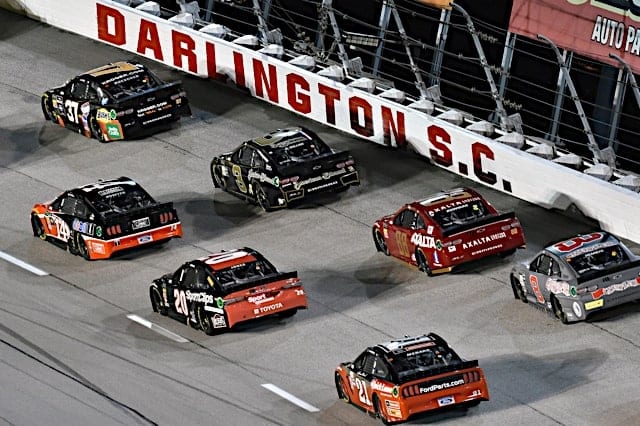 The 2020 NASCAR season, paused for about two months due to the COVID-19 pandemic, is less than a week away from resuming.  The first two races will be held at Darlington Raceway in South Carolina, about a two-hour drive from race shops in the Charlotte area.  They include a 400-mile event on Sunday, May 17 followed by a 500-kilometer, mid-week showdown on Wednesday, May 20.

Darlington has not hosted multiple, points-paying Cup Series races within one season since 2004.  Now, it will be triple the fun; this venerable track will also hold the Southern 500 on its customary Labor Day weekend date.  That gives the drivers of the Cup Series an unprecedented three chances to dance with the Lady in Black in one season.

So, who is poised to take advantage of the extra opportunities to race at Darlington?

Based on recent results, the favorite may be Joe Gibbs Racing.  Five of the last 10 NASCAR Cup Series races at Darlington have been won by JGR, and that doesn’t include Martin Truex Jr.’s win in 2016 with Gibbs-aligned Furniture Row Racing.  Whether racing for JGR or FRR, Truex has been competitive at Darlington lately, leading laps in three of his last four starts.  Teammate Kyle Busch has not won at Darlington as recently as Truex, but he has finished no worse than 11th in his last 10 Darlington races, so expect a few strong performances from the No. 18 team.

That said, the other JGR duo, Denny Hamlin and Erik Jones, are really the men to beat.  In 14 Cup Series starts at Darlington, Hamlin has two wins, seven top fives and 11 top 10s.  He is also one of only two active drivers who have multiple Cup Series victories at the track Too Tough to Tame.  Anyone who hopes to leave Darlington with a win will have to go through Hamlin.  Jones, meanwhile, has only raced at Darlington three times but has placed in the top 10 in every event.  He also prevailed in last year’s Southern 500, emerging as the dominant driver late in the race and securing a decisive victory that clinched a playoff bid.  A win at Darlington this year would give Jones a big confidence boost after a rough start to the 2020 season; he’s 21st in points without a top-five finish thus far.

Another team to keep an eye on will be Hendrick Motorsports.  Before the postponements began, the Hendrick drivers looked to be showing a lot of improvement this year.  Alex Bowman went to victory lane at Auto Club Speedway and is currently fourth in season-long points, just behind Chase Elliott and ahead of Jimmie Johnson.  William Byron is much further down the standings in 19th after promising runs at Daytona International Speedway and Las Vegas Motor Speedway fell apart for the No. 24 team.

Given their start to the season, HMS is probably eager to get back to racing.  However, Bowman and Byron have relatively little experience at Darlington and no top 10s between them.  Elliott has fared better with a fifth in 2018 and a 10th in 2016, but the South Carolina track has never been one of his strong suits in Cup Series competition.

Johnson is the other active driver with multiple Darlington wins, though his most recent came in 2012.  Since then, Darlington has been rough for the No. 48 team, which has not scored a top-10 finish in the last five races there.  Johnson is still planning to retire from full-time racing after this season, so it’s now or never for him to recapture the magic at Darlington.  If he and his Hendrick teammates run well in these races, it will be a sign that HMS is, indeed, on the upswing.

One driver who has run well at Darlington but won’t be competing is Kyle Larson.  Larson has three top fives and 497 laps led in his last four Darlington starts.  Perhaps those results bode well for Matt Kenseth, who will take over the No. 42 after Larson’s dismissal from Chip Ganassi Racing.  Kenseth has been out of NASCAR for awhile, but he is no slouch at Darlington.  In his last seven starts there, he has earned five top 10s, including a win in 2013.  By joining CGR, Kenseth will be reunited with former teammate Kurt Busch, who has four top 10s and two finishes worse than 30th in his last six Darlington races.  Ganassi’s duo of veteran drivers may just be the biggest Darlington wildcards when racing resumes.

Other top-tier contenders are likely to include the Team Penske trio.  Brad Keselowski struggled at Darlington earlier in his career, but he has since turned that performance around. In his last five races there, he has a win and no finish worse than 15th.  Those events include three top-five finishes, most notably a win in 2018.

Teammate Joey Logano ran second to Keselowski in that race and has three top fives of his own in the last five Darlington events.  Logano already has two wins to his name in 2020 and should be a factor in the coming weeks.  Ryan Blaney, on the other hand, will have to hope that his early-season strength carries him to a good result at Darlington, where he has never had a top-10 finish.

Overall points leader Kevin Harvick is, as usual, the biggest threat to win among the Stewart-Haas Racing drivers.  Harvick won at Darlington in 2014 and is currently riding a streak of seven consecutive top-10 finishes there.  The rest of SHR, though is more likely to wind up with a few Darlington stripes than the checkered flag.  Clint Bowyer placed in the top 10 at Darlington last year, but that’s only his second top 10 there in 14 starts.  Aric Almirola has never earned a Darlington top 10 in eight starts.

Then there’s SHR rookie Cole Custer, set to run his first-ever Cup Series race at Darlington.  He was strong there in NASCAR Xfinity Series competition, even winning last year’s event.  But as Custer and fellow rookies Tyler Reddick, Christopher Bell and John Hunter Nemechek will learn, racing at Darlington in the Cup Series is a whole different ball game.

So, with all that said, who really is in the best position to take a checkered flag or two at Darlington?  Given the uncertainty surrounding these events and the lack of practice time, put your smart money on a veteran.  Hamlin and Harvick are your best bets while Keselowski, Kyle Busch and Logano trail close behind.  That’s a fairly typical shortlist of contenders for most races over the last few seasons.

But keep in mind the Lady in Black often has a few tricks up her sleeve.  In a racing season that has taken an unprecedented scheduling turn, do not be surprised if Darlington delivers a healthy dose of chaos to even the most accomplished drivers.