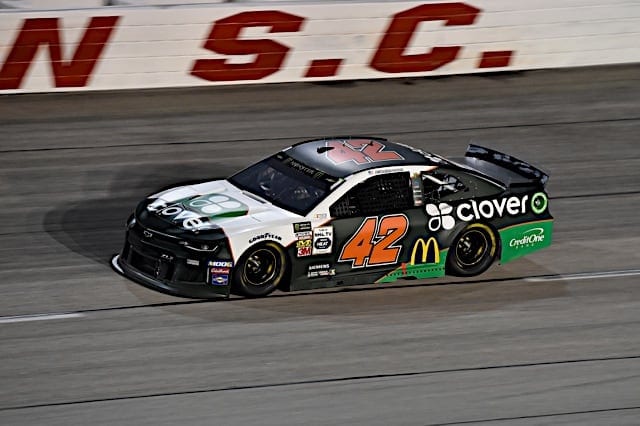 For all the successes of pros going iRacing during the NASCAR COVID-19 shutdown, the general consensus seems to be that the return to real-track racing is coinciding almost perfectly with the eNASCAR Pro Invitational Series running its course. Be it the Kyle Larson slur fiasco or Santino Ferrucci turning the end of last week’s IndyCar race into more of a video game than it already was, that particular coronavirus crutch is ready for retirement.

Judging by the comments section from last week, the same could be said for this commentary column (Thinkin’ Out Loud will be back this coming Sunday). In the time my colleague Bryan Nolen and I have been working together at Frontstretch, I’ve authored more than 150 columns, and this one was the first that had him messaging the entire staff to check out what our commentariat was up to. And while I’ve been called worse names and threatened with actions that would have been enticing (had they been proposed by a fit brunette, anyway) during my tenure here, “little castrated boy” was a new one. A for originality.

All of that for commenting that I find a man (or a robot, it’s Matt Kenseth, after all) attacking another from behind in the dark to be frowned-upon behavior? Is it really too much to ask that when a NASCAR competitor, or any man in general, has an issue with another that has to be settled with a fight do so face-to-face and squared up with his opponent? I have and always have had a big mouth, and I’ve been popped for having it before. Even the ridiculously immature teenage bullies that did said popping had the guts (honor even?) to do it to my face rather than engaging in tactics that would be right at home on Worldstarhiphop.

Our own Matt McLaughlin once referred to what he perceived as the bloodsport side of NASCAR Cup Series racing as “bread and circuses.” I’m inclined to update that to eunuchs and theater.

While on the topic of theater, let’s talk security theater. I’ve been shuffling from family home to family home during the COVID-19 pandemic as situations required it. My house is now occupied by my mother, who as an emergency physician needed a place to stay that didn’t put the rest of our family at risk to exposure (Happy Mother’s Day Mom, I hope that you understand, you are appreciated). That shuffle sent me to Dare County, N.C. this weekend. I’m helping my sister as she starts her new job in ocean rescue.

As was previously discussed in this column, Dare County opted to close itself off from the outside world under the guise of protecting itself from COVID-19 spread (though local residents were allowed to come and go as they please). But now, with local businesses starving having no tourists to fleece and a federal lawsuit filed, all property owners can access the island with a proper re-entry permit. Driving to our family home this weekend, I saw two cars in front of me with North Carolina tags just waved through the checkpoint, while the police handled both my permit and driver’s license to ensure they matched before allowing me to drive on through.

Two observations here. One, I had no idea North Carolina license plates were COVID-19 repellents. With all the UNC athletes with fake degrees running around, one would think we’d have stamped enough tags to end this pandemic by now.

More relevant to racing, though, the concept of security theater is directly comparable to NASCAR’s potential decision to limit at-track media coverage of Sunday’s (May 17) upcoming Cup race at Darlington. Yes, it is vitally important the sanctioning body keep personnel at the track to an absolute minimum. But should they choose to let reporters attend in any form, that means the press (Pandora’s) box is open.

As I pointed out last week, there’s more than 50,000 empty spaces the 15 or so beat reporters likely to attend could easily do their jobs. All they’d need is a pair of binoculars and a hotspot while social distancing more than the NASCAR drivers competing.

My perspective is the media are not essential to a Cup race being run. But if NASCAR finds them essential enough to let a limited amount through the doors? Restrictions would mean you’re not including a number of both diverse and unique perspectives. To get all sides of the story, it would be a shame if Kickin’ the Tires Jerry Jordan was left out; he has been domineering during the pandemic as the most outspoken advocate of NASCAR’s return to the track.

The sport, and all those who follow it at a level beyond the AP recap, would be done a disservice. There’s a difference between making an informed decision not to cover a race for safety reasons and having the sanctioning body make that choice for all but a hand-picked few.

Now, having said that, and as I said last week, I wouldn’t be going to Darlington to provide race coverage even if the powers that be had sent me a golden ticket and a chocolate bar asking me to do so. Rather, I’ll be comfortably at home with a cold Mountain Dew, a pen and paper, eagerly enjoying the return of stock car racing’s major league. And on reflection, that I’ll be watching from home this Sunday is poetically consistent with perhaps my favorite part of this sport.

I still remember vividly my first experiences at a live sporting event, which came with my dad at RFK Stadium as we watched the Washington Redskins. It didn’t matter that the Redskins went 0-5 in regular season games we attended. It didn’t matter that we spent the entire Metro ride to the Dallas Cowboys game in 1994 stoked that rookie Gus Frerotte was going to replace rookie Heath Shuler as the starting quarterback, only to be begging for Shuler to be put back in at halftime.

Most of all, it didn’t matter who we were; we were all Redskins fans. Long before Stubhub turned NFL games into a Buffalo Wild Wings with grandstands where fans of all 32 teams gather regardless of who’s playing, RFK was known for being the melting pot of Washington. Even as an eight-year-old, I could pick up on how different it was to be surrounded by everyone from defense contractors to cab drivers who, for three hours on Sunday, were all one and the same. Being part of a raucous, focused crowd that would literally shake a 50,000-seat building is something that’s come to define my activities later in life, both as a traveling race writer and a D.C. United supporter.

Being a race fan in this day and age is comparable to what it was like being a soccer fan in this country a decade ago… us against the world. Soccer and motorsports seem to be passing each other on different trajectories in this country; just look at Nashville, where the construction of a MLS stadium could literally result in the demolition of the historic Fairgrounds Speedway. Nowadays, the experience at a racetrack feels a lot like soccer games used to. That is… a race fan among race fans. Perhaps that’s why Larson enjoyed the level of fan support he did after his iRacing gaffe, despite him being clearly in the wrong. Larson is one of us, even if he did make a major mistake that needed to have consequences.

That feeling of being part of the crowd is exactly why I spent almost as much time traversing short tracks across Florida as I did at Daytona during Speedweeks. Being in cramped grandstands with local race fans is as good as it gets. With that not an option right now, being a face in the crowd watching at home this Sunday will be the best seat I could ask for. That’s even if those of us that follow NASCAR will be at the mercy of the FOX Sports crew more than we ever have been.

There’s much to fear in Darlington being the site of NASCAR’s risky return to racing. The Lady in Black, a track that’s been a feel-good story for the sport the last 15 years after dedicated race fans kept the track on the Cup schedule, and eventually brought the Southern 500 back home, would be the last venue on the slate that I’d ever want to see historically tarnished with a race gone wrong, should an outbreak occur.

And it remains to be seen whether taking to Darlington’s banks with empty grandstands will bring about pain just as it does the euphoria of racecars returning to competition. Again, as mentioned, Darlington stands as a monument not just to stock car racing history, but as the place Southern race fans took a stand and prevented the track from going the way of Rockingham and North Wilkesboro. Those missing fans are going to stick out there more than anywhere else.

One of the last Cup races I attended as a fan before going back to covering races for Frontstretch was the Southern 500 in 2018. That race was as memorable an experience for me as those Redskins games I attended 20+ years ago, cracking jokes while seated between two LSU fans and two Miami fans that, despite their teams clashing on the gridiron, were united all night long as stock car race fans (except for stage breaks). Darlington felt like home that night.

I can only hope it manages to keep that feeling despite the closed gates.