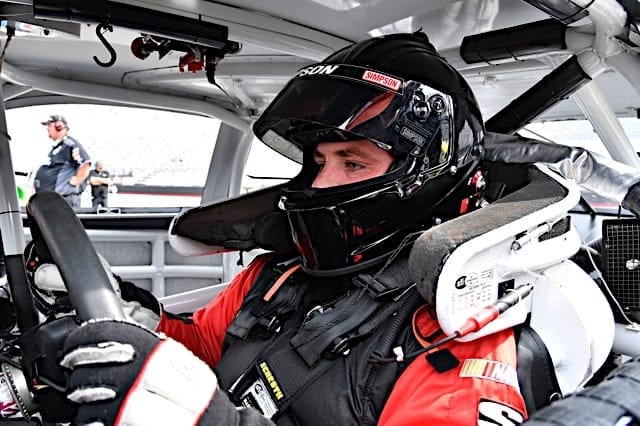 Just like in the early days of NASCAR, racing cars and selling moonshine go hand-in-hand for one driver.

Tennessee Shine Company is owned and run by part-time NASCAR driver Blake Jones, who has in his career: four starts in the NASCAR Cup Series, five starts in the NASCAR Xfinity Series and 10 combined starts among all three ARCA Menards Series. The funding for the majority of his recent races has come from his moonshine business based out of Sevierville, Tenn., and to have his business on board displays a view of NASCAR’s past.

“It’s pretty special,” Jones told Frontstretch about having Tennessee Shine Company as his sponsor. “The last several years, its been like that for us. It’s been chasing the dollar to get into the racecar. We’ve done a lot of businesses to help us go racing, and that’s who we are and that’s all we’ve ever done is drive racecars. But the sponsorship is more and more important as you go up through the ranks, and it’s no more important than it could ever be in the Cup Series.

“It’s really expensive to go racing on Sundays, and a lot of the people in the stands don’t understand that aspect. There are really three different races going on in a Cup race. You’ve got your guys like the Gibbs, the Hendrick, Penske, that’s racing to win the race. Then, you’ve got your mid-class, Front Row [Motorsports] and all those guys who are racing from anywhere from 20th to 30th place. Then you’ve got the guys like Spire [Motorsports] and BK [Racing] was, that you’re trying to fill that gap where a 30th-place finish is a good run.”

Jones was last seen in the Cup Series at Talladega Superspeedway last fall driving with Spire Motorsports, Jones’ first start on a superspeedway in NASCAR’s top division. One of the must-haves for Jones is that his Tennessee Shine Company needs to be on the car in order for him to compete, and the thing he was waiting for was NASCAR’s approval.

“It was a big “if,” Jones said about Tennessee Shine Company sponsoring him at Talladega. “It was in my contract that if they weren’t going to allow it, then we weren’t going to run, but everything came together. NASCAR needs it. It’s where their roots are, its how they got started, and they need to stay true to them.

“It’s a big part of racing and they wouldn’t be where they are today without a lot of those old-time moonshiners.”

Spire was a new organization in 2019, and Jones became one of its inaugural drivers. Jones touted NASCAR veteran Tommy Baldwin Jr. as a person who helped get the organization going so quickly.

“A team is built with a lot of good people and a lot of important people. It was a new team, but it wasn’t a new team in the aspect of having veteran crew chief Tommy Baldwin Jr.,” Jones said. “A lot of races and a lot of drivers he crew chiefed for — and I mean look at where some of them are at today. He’s a big name, so you know that’s the most important part. They had a veteran leader.

“He was first class to work with and he carried everybody very well. The team is made up of a lot of good people, and it has really good potential. It’s just even with the new car, if you can’t afford to run a full allotment of tires, there’s still budgeting problems there. You have to be able to have the money to spend at a minimum, at least, to be competitive with the new car. It will put things a lot closer for sure, but you’re always going to have a void there that’s going to be hard to fill other than on speedway or road course racing with an underfunded team.”

Other than being a driver, Jones has learned a lot about the business side of NASCAR from being a sponsor as well. He has sponsored himself multiple times throughout his career, providing him with plenty of insight on what NASCAR does for branding.

“No doubt you get a run for your money,” Jones said about being a sponsor in NASCAR. “I don’t know if brand loyalty is there like it once was. Ten years ago, you’d have a Jimmie Johnson fan, they’re not going to go shopping at Home Depot. That’s betraying Johnson, they aren’t going to help Tony Stewart.

“The economy is booming in every aspect, there seems to be a lot of free money. NASCAR, yeah, you definitely get a bang for your buck. I don’t know any billboard in America that will see as many eyes as you could see on a corner panel of a racecar, but the number to be a primary sponsor on a Cup car is so astronomical, without being a corporate chain, there’s nobody that could afford to do that.”

In the Cup Series, you are seeing sponsors abandon ship, but not entirely. The demographic has changed over the last few years as sponsors shift away from sponsoring full 36-race schedule and now only do part-time deals because of the price. Sponsors have taken a step back and sought out what and where they would get the biggest bang for their bucks.

“There is plenty of room for sponsors, but the problem is, for me personally and Tennessee Shine Company, it makes no sense for me to go sponsor a race in California,” Jones added. “We aren’t in liquor stores in California, we don’t have a wholesale store in California. So the range of my audience for a California race, I mean yeah, there are going to be people on the east coast watch it, but it’s not going to be as big as a race at Bristol [Motor Speedway] or Talladega that you could take sponsors to.

“We’re in a lot of liquor stores on the East Coast, so anywhere like Michigan [International Speedway], for example, that was a good one, and even New Hampshire [Motor Speedway], it makes more sense in that aspect. But it’s making the teams, let’s use Leavine Family Racing for example, they ran pretty stellar for their budget last year with [Matt] DiBenedetto in the car. But look how many different sponsors they had on the car throughout the year. They had to go out and find so many different primary sponsors, and he even turned to social media a couple of times.”

Fans have been getting a lot better opportunities to enjoy the infields of racetracks and the amenities they offer. Talladega is just one of the newest examples of that with its new high-end infield and garage. Phoenix Raceway, Daytona International Speedway and others are just a few examples of the upgrades NASCAR is providing to improve the fan experience.

“Talladega is a prime example of giving fans and special guests a bigger bang for their dollar,” Jones said. “With their new fan zone, they went above and beyond. They can go through the garage, they can see their favorite drivers, they can see the teams working on the cars, and NASCAR needs more of that. The people that were NASCAR fans 15 years ago are probably growing out of it, or they have grandkids, or maybe they aren’t hardcore NASCAR fans anymore.

“The younger generation, you always have to be feeding those younger kids. They have to be interested in it to keep that going. And like the fan zone at Talladega, for example, you take a six-10-year-old and they get to see what’s going on in there, you might have a NASCAR fan for life.”

The number of drivers popping in the Cup Series over the last handful of years has greatly progressed, but there are less high-dollar rides on the track. Those high-dollar teams aren’t really putting money in scouting like other sports, including baseball, basketball and others.

“I don’t know if anything has changed, really,” Jones said. “There aren’t really talent scouts anymore. Drivers don’t get picked up by talent much anymore. It’s possible, but usually, it comes from money. But you see people like DiBenedetto — I’m sure he had a little bit of money behind him, probably not anything big, but you know he started out with BK, then moved to Leavine Family Racing, and now he’s in a Wood Brothers [Racing] car, so you know it’s possible.

“Alex Bowman started out at Tommy Baldwin [Racing] and ended up getting pushed out and running a few Xfinity Races, and now he’s in a Hendrick [Motorsports] car. It happens, it just doesn’t happen as much. They look for drivers with money. Some of these kids weren’t born rich, they were in a really good position and got money behind them at a young age.”

Jones has aspirations to return to the Cup Series, as NASCAR returns this weekend at Darlington Raceway.

“I am going to shoot for, seven to eight Cup Series starts would be an ideal number,” Jones said. “Because mainly funding, it’s just not there to run a full season. And second, I can’t afford to be away from here (Tenn. Shine Co.) for a full season. I’m not saying I wouldn’t take the opportunity if a full season came and the money was there. But for racing, like we have been doing with a small family ran business as the primary sponsor.

“That’s just how it is. I have to come here and work to be able to afford to race. I would like to run both Bristols [Motor Speedway], both Martinsvilles [Speedway], some short track stuff and hopefully throw in Daytona [International Speedway] or Talladega, but we’re talking to a few people now.”