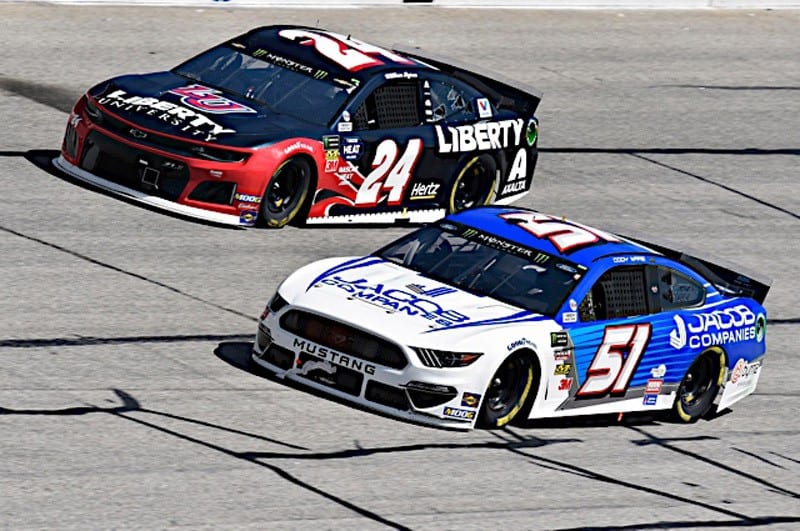 Did You Notice? … Rick Ware Racing suddenly has more NASCAR Cup Series team alliances than Joe Gibbs Racing? The underdog operation has agreed in principle to a purchase of Premium Motorsports. FOX Sports’ Bob Pockrass reported the move in a Twitter post Wednesday that consolidates the back half of the Cup garage.

The sale puts Ware in control of four full-time charter teams.  The newly-purchased No. 15 will continue to be driven by Cup rookie Brennan Poole full-time. He’ll join the No. 52 (now No. 27) which JJ Yeley will drive at Darlington Raceway before Gray Gaulding takes over in a two-race deal. The No. 53, which is a charter leased from Front Row Motorsports, will also have a potpourri of drivers (iRacing darling Garrett Smithley is in for Darlington). Then there’s the No. 51, originally leased from Richard Petty Motorsports in a partnership, which will run Joey Gase full-time. (Although Gase might bounce around between car numbers at RWR).

That’s already a mouthful. But there’s more! BJ McLeod announced this week his Cup team will run 15 races beginning this weekend at Darlington. (A story broken by Frontstretch.) His new No. 78 will get his equipment in an alliance with RWR. And then there’s on-again, off-again Cup owner Tommy Baldwin, announcing a return to Cup this weekend with Josh Bilicki driving his No. 7. His equipment comes from Premium Motorsports, where he was the Competition Director … which has now been purchased by RWR.

Then, there’s Spire Motorsports, last year’s surprise July Daytona winner with Justin Haley. The No. 77 is now driven by Premium’s main driver, Reed Sorenson, and that team was preparing their cars. RWR now inherits that contract and will “outsource” their equipment and prep work to Spire.

That’s a total of seven cars running with RWR connections, a handful of confusing deals that leave them dangerously close to violating NASCAR’s policy of no more than four teams per owner. In fact, because of that policy, McLeod can only enter his No. 78 in races where he’s not a driver of one of RWR’s four full-time cars.

At first glance, these deals might not mean much to a casual NASCAR fan. For any of the drivers and teams listed, a top-25 finish would be as good as a victory. They’ll be lucky to get any TV time during the FOX Sports broadcast.

But the moves also shrink the ownership ranks in Cup that much more. Let’s break down the entry list at Darlington for Cup’s Sunday return (May 17).

That’s a total of 20 teams. But let’s take a closer look at the single-car operations. The Wood Brothers’ No. 21 (Matt DiBenedetto) has operated like a fourth Team Penske outfit. Leavine Family Racing’s No. 95 (Christopher Bell) is driven by a rookie under contract to JGR’s four-car outfit. We’ve already talked about Spire (No. 77), McLeod (No. 78) and Baldwin (No. 7).

Germain Racing (No. 13) has a strong alliance with RCR considering Childress’ grandson Ty Dillon is behind the wheel. Richard Petty Motorsports (No. 43) also is connected to RCR; Starcom Racing (No. 00) gets engines from that program. Go FAS Racing (No. 32) is working more closely with SHR. Only MBM Motorsports (No. 66) and eNASCAR Pro Invitational Series star Timmy Hill are “going it alone” with no connections to a larger program.

That means you have about 10 teams on top of the food chain, providing life support to the smaller programs. In theory, you can even shrink that number even more. JTG-Daugherty Racing and Chip Ganassi Racing get their engines from Hendrick Motorsports. The Ford programs (SHR, Penske, RFR, Front Row) all have engines supplied by Roush-Yates.

Why does shrinking ownership matter, you might be asking? As long as there’s cars showing up to race, who cares where the money comes from?

The answer comes in the way NASCAR operates. All these owners are independent contractors; most may be part of the Race Team Alliance (RTA) but they’re not true franchises in the way, say, the New York Yankees are part of Major League Baseball. As I pointed out in Athlon Sports, it makes their survival more tenuous; there’s less financial resources to pull from. And with corporate sponsorship in imminent danger for 2021, as U.S. GDP threatens to contract by 5% this year, healthy, deep-pocketed owners are necessary for NASCAR to survive.

Premium Motorsports wasn’t the most successful stock car operation. In nearly 1,000 starts in the sport’s Cup, Xfinity and Truck Series they collected just two top-five finishes, never running better than third (Memphis, Xfinity, 2008 with Kenny Wallace). But owner Jay Robinson, through the Great Recession and NASCAR’s great contraction of the past decade, still found a way to profit. He always was able to bring his teams to the table.

Now, he’s one less person sticking around as NASCAR faces growing economic headwinds. And with no new full-time owners this season, can the sport find new investors willing to buy in?

Did You Notice? … The most successful drivers in the eNASCAR Pro Invitational Series (with one exception) have yet to see their skills translate into real-life Cup competition? Five of the six top-performing drivers have never won a Cup Series race: Hill, Smithley, William Byron, Landon Cassill and Ryan Preece. Only Denny Hamlin, a two-time iRacing winner during this stretch, has also had success on the Cup level.

Byron and Preece are the most likely to capitalize on the momentum. Byron won the pole at Darlington last September and earned some stage points before getting collected in a wreck. Preece finished one spot behind him in that race (22nd) but has run top 10 at Darlington in a severely underfunded Xfinity car.

But the iRacing results lead to two opinions that directly contradict each other. One: Hill, Smithley et al would be neck-and-neck with superstars like Kyle Busch every week if they only had top-tier equipment. Two: like Frontstretch’s Matt McLaughlin wrote, the fact they ran circles around Busch, Jimmie Johnson and others shows that iRacing has yet to match the real-life skill needed for NASCAR competition.

I’m somewhere in the middle. I think it’s good for Hill, in particular, to show he’s got more talent than a decade of riding in backmarker equipment seems to suggest. He’s not a guy who’s made it to the Cup level purely by financial support.

But I do think iRacing itself is also a different skill set. I look at it this way: I’m really good at Major League Baseball games on PlayStation. In real life? I retired from Little League at the ripe old age of 12; I went a whole season with one total extra-base hit (a triple… the fact that I remember it tells you how bad of a hitter I was).

But that’s why I love that NASCAR did this seven-week series. iRacing can take what they learned from this exhibition, then increase its realism in a world where eSports is red hot. Plus, the sport brought in a few new fans and kept its viewership nearly one million strong while all others were sidelined. It’s a win/win for everyone not named Kyle Larson and Bubba Wallace.

here in ga they say anyone can get a covid-19 test that wants it. tests are available. it should be mandated that the teams and drivers are tested each week. all it takes is one person testing positive to have it all in lock down again.

Maybe thats why they won’t be testing.

RWR is the Golden Corral of Nascar. All Quantity, NO Quality.

and the golden corral where i live has been closed since mid-march!

If you want to be turned off to ever eating at Golden Corral, watch unattended children at the buffet. Parent go in and let their children run wild.
Come to think of it, I’d bet buffets are going to be a hard sell in the post-Covid world.