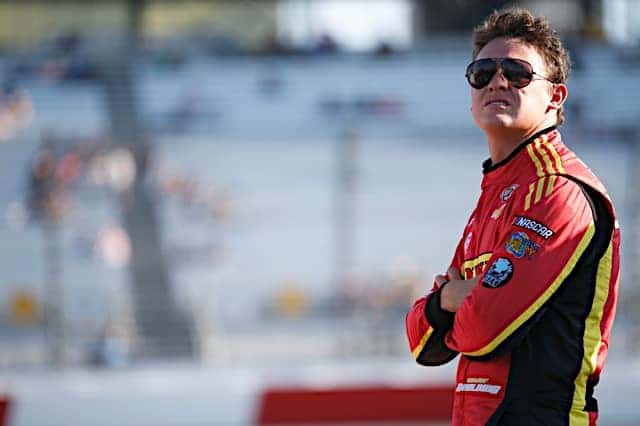 After spending the beginning of 2020 without a ride, Gray Gaulding will return to the NASCAR Cup Series with Premium Motorsports at Darlington Raceway on May 20, the team announced today, May 13.

Along with racing at Darlington, Gaulding will compete in the Coca-Cola 600 on May 24.

Gaulding will pilot the No. 27 Panini Ford Mustang for Premium Motorsports.

“I want to clarify, I am not under the Rick Ware banner; I’m with Premium Motorsports,” Gaulding tells Frontstretch. “I have had a great relationship with Jay Robinson and his entire staff and obviously the race team.

“It’s really good to be back with Jay and Premium and kind of get back into a grove, back into a racecar. First and foremost having Panini Trading Cards back, they have been the best partner in the world to work with. Last year we worked together in what was supposed to be a one-race deal, and it has turned into the best partnership I’ve ever had in NASCAR. Pretty thankful for them and what we did last year, and I am looking forward to another year together. I think its a perfect fit for Panini to be on board for one of the biggest crown jewels.”

Gaulding competed in a full season last year in the Xfinity Series with SS-Green Light Racing. He earned his career-best finish of second at Talladega Superspeedway. He also tallied up four top-10 finishes during the season and finished 13th in points.

“I think it will be a challenge but I think I am ready for a challenge,” Gaulding says. “I’m prepared mentally and physically. This whole quarantine and the last two months, I have been watching a ton of film and training my rear end off to be ready for this opportunity.

“I kind of see this like riding a bike, I feel like I’m a driver that could be away for two years and still jump in a racecar and go out there and get it done. I’m that confident, not a cocky way, but I feel like the work I have put in at home. Races are won with preparation leading up to the event. I feel really good about it, yes, its been a long time since I’ve been in a Cup car, but I have been watching a lot of on-board cameras.”

Gaulding has 50 career starts in the NASCAR Cup Series, with a best finish of ninth at Talladega in 2017 with BK Racing. He’s confident he’ll run more races in 2020, but is unsure of what his schedule looks like as of now

“Right now I have signed these two races with Premium Motorsports,” Gaulding says. “I have a great relationship with Jay, and I feel like we will put our minds together and other races he wants me in. Obviously I can’t announce the races because NASCAR has only announced a few races on the schedule. We will definitely announce these at a later date, but like I said, I am looking forward to being Jay’s guy as far as doing him a good job on and off of the racetrack and in going out and just having fun.