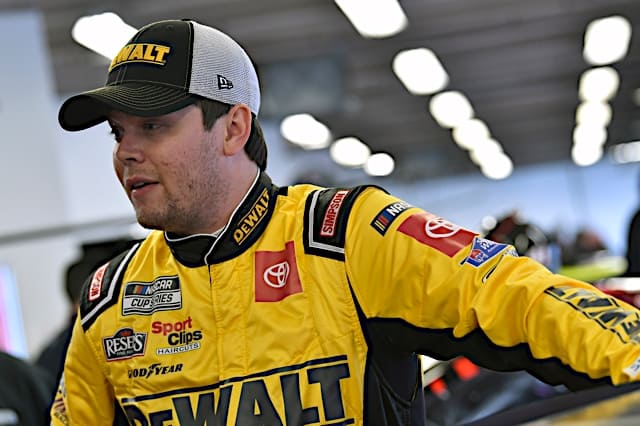 Gonna get back into the swing of things here with some good ol’ hypotheticals. Hooray!

One of the craziest aspects of the NASCAR Cup Series schedule the next two weeks as the sport visits a pair of classic tracks — Darlington Raceway and Charlotte Motor Speedway — twice each. Rather than four races at four different tracks, we get a double dose of Darlington and Charlotte, and that’s bound to be good news for some and bad news for others.

Let’s say I was a road course expert, for instance, and NASCAR suddenly had two straight races at Sonoma Raceway. Now I’ve got not one, but two chances to make up a whole bunch of points, possibly even point myself into the playoffs with a win or two.

Darlington and Charlotte aren’t exactly specialist tracks in the way Sonoma might be, but that isn’t to say neither track has its strongmen. Some drivers are flat-out good at Charlotte. Others have Darlington’s number, despite its reputation as the Track Too Tough to Tame.

First, refresher time! Joey Logano‘s already pretty much a lock for the playoffs, having won two of the first four races of the season. Alex Bowman and Denny Hamlin, with a win apiece, are probably good to go as well, barring an onslaught of one-time winners before the playoffs are finalized.

On the flip side, Martin Truex Jr. sits 15th in points without a single top 10 in the first four races. William Byron‘s not much better off, with a top 10 but a lower points position (19th). Ryan Newman, with one start this year, and Matt Kenseth, with none thus far, have to play catch-up in order to snag a playoff spot — something that’s probably doable as long as they win a race.

Once Cup moves out of this quick four-race, two-track run, things could conceivably be a bit different at the top of the leaderboard. Here’s how it could shake out.

Firstly, Darlington. Best average finish there among active drivers? Erik Jones! That’s due in part to a relatively young career, but Jones has an incredibly strong start there in his first three appearances regardless, winning once and scoring two top fives and three top 10s in three starts.

Take two, Charlotte. Johnson’s got a storied career there despite some missteps in recent years, nabbing eight wins in 35 starts. Hamlin’s only a tick behind him in average finish (12.2 vs. 12.3), despite somehow never winning at the track. Logano’s no driver to sneeze at either, with a win, six top fives and 10 top 10s in 20 starts.

Using some good ol’ hypothetical averages magic, let’s say those drivers — among others with strong records at those tracks — excel at Darlington and Charlotte’s two-race streaks each, while those who struggle a bit more indeed struggle.

For starters, Jones and Johnson definitely seem to have decent opportunities to win their way into the playoffs — a welcome sight especially for the former, who enters Darlington 21st in points with just one top 10, therefore out of the playoff picture thus far.

And in terms of average finishes at those tracks, Logano appears to have a chance to shoot into the overall points lead. Not that he’s far from it now anyway, sitting just one point behind Harvick pre-Darlington. Harvick, meanwhile, should hold on to his top-two spot, while Johnson could ride his usual Charlotte success to the top three.

Look for Keselowski to make a nice jump, too — perhaps into the top five — while Truex, despite his early-season woes, could be healthily inside the top 10 when all is said and done.

Meanwhile, Ryan Blaney, who comes into Darlington in the top 10 in points, may not fare well given his past history at either track (though if we were talking the Charlotte ROVAL, it’d be another story), and Matt DiBenedetto remains a bit of a crapshoot, with a middling average prior to 2020 at these speedways but with better horsepower under the hood than he’s been accustomed to.

Of course, these are exceptional circumstances we’re looking at — four races in 11 days, the first after a two-month break. Not only could fatigue set in toward the end of the stretch, but the rust could prove too dense to shake off for others after such a lengthy respite, too. Others not even on our radar could rise to the occasion — and then there’s the pesky problem of those four Cup rookies who had virtually zero experience on these tracks in a Cup car prior to 2020. None of them have had a 2020 to write home about just yet, but that’s not to say they can’t sneak in some strong runs here soon, especially if they’re quick learners and can make something happen at the second events at each track.

Lots of variables these next two weeks, that’s for sure. Let’s check back then and see where we’re at.

charlott has 2 many races anyhow