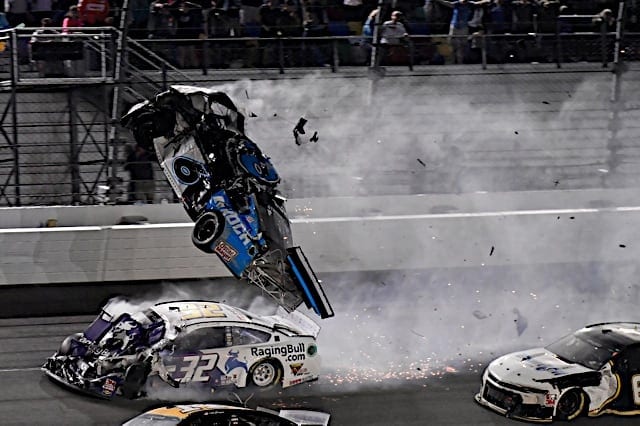 Everyone feared the worst following this year’s Daytona 500.

Ryan Newman, leading the Great American Race in the NASCAR Cup Series with just a couple hundred yards to go, got turned into the outside wall, flipped and then was clipped by Corey LaJoie, sending the No. 6 Ford airborne across the finish line.

For what felt like an eternity (but actually was just short of 16 minutes), Newman was removed from the car and transported to the Halifax Medical Center down the street.

Newman said he doesn’t know how he survived the wreck. Quite simply, he’s not sure if he’ll ever have the answers to how and why, in one of NASCAR’s most vicious incidents over the past few decades.

“I think you can pay a lot of attribution to the safety of the race car, the safety of my helmet, my equipment,” Newman told media on Thursday (May 14) via a Zoom call. “They always say things happen for a reason and this year was the year.”

Newman said he doesn’t remember anything about the crash or the day in general. He’s yet to watch back the full race, though he has seen videos of the wreck. He also doesn’t recall his time being in the hospital or who visited him until he was leaving, holding hands with his two daughters after being put in “somewhat of a medically induced coma” during his stay.

“I feel like a complete walking miracle,” he said.

If it weren’t for the videos, Newman said he wouldn’t be able to tell you he was the driver of the No. 6 car during the wreck.

“As I watched the crash and had to make myself believe what I had went through, I really looked to my dad to say, ‘Hey, did this really happen,’” Newman said. “Like it was kind of there’s no déjà vu when there’s no deja. It was just kind of like, ‘Alright, I believe you.’ It’s crazy. I’m happy I’m here.”

Outside of the medically induced coma, Newman said nothing was wrong with him, though he did have a PICC line in his shoulder. He self-diagnosed himself with a bruised brain due to conflicting reports from different medical experts.

Newman said his Arai “carbon fiber zero” helmet, which was just his second time wearing it in Cup  racing — fourth overall — was crushed. But he doesn’t have data to prove whether or not LaJoie’s car hit his helmet or not.

“But I see the end result and that my helmet did have contact and my HANS did have contact, and I was being moved backwards in my seat as his car was moving me forward, so I can’t honestly tell you what percentage of that inertia and those physics that went into the actual action of the crash were being driven by his car hitting me or his car hitting my roll bars.”

“…I’m just proud of how everybody has united in the past say 20 years that I’ve been involved in this sport to make the tracks safer, the walls safer, the cockpit safer, the seat safer – all the work that has gone into that collectively, not just the NASCAR world, but everybody,” he said. “… It’s not just a Newman bar, it’s not just a Petty bar or an Earnhardt bar, it’s the net effort of everybody in auto racing that, I think, contributed up to that day.”

However, during NASCAR’s investigation of the incident, Newman stated the team had not properly secured the window net.

After the wreck, Newman said he was hanging upside down, fighting off medical personnel. He did, however, have a conversation with a couple of those workers when he showed up to Phoenix Raceway in early March, where they agreed to save the conversation for a later date.

Though Newman hasn’t had that conversation yet, he will return to the No. 6 car this Sunday (May 17) at Darlington Raceway, when NASCAR returns after a 10-week hiatus due to the coronavirus pandemic. He will roll off from 21st via a random draw on Thursday night (May 14).

Of the 40 drivers in the Cup field, Newman is the most recent driver to turn laps at the Track Too Tough To Tame. In early March, he completed approximately 30 laps on the 1.33-mile oval, with two five-lap runs before putting on a different set of tires for a 20-lap run.

Of all places to make a return to racing at both personally and from a sport, Newman said he is glad it’s at Darlington.

“It’s my favorite racetrack and just really wanted to get back in it and at it,” Newman said. “I’ve been working really hard to do the things that I needed to do test-wise to pass my concussion test and protocol and things like that, so I could be down there with my team and Dr. Petty to establish the fact that I felt well and could prove it and I was well behind the seat of the racecar, so I basically did that.

Newman confirmed there was no internal problems at the track, as his first five laps in the 20-lap run were quicker than the pole speed from last September. “I can handle the speed,” he said.