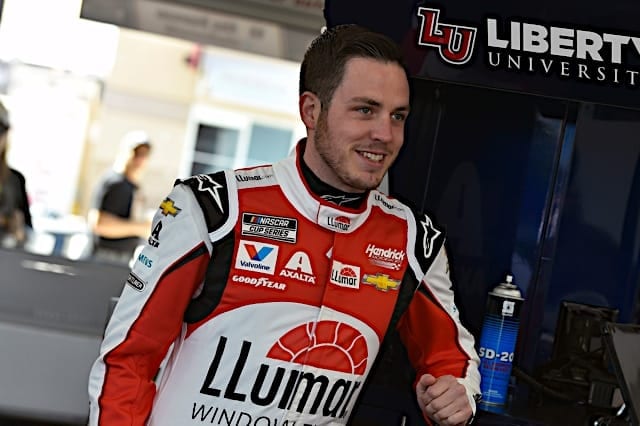 Alex Bowman has signed a contract extension with Hendrick Motorsports through the 2021 NASCAR Cup Series season. Bowman tweeted the news on Saturday (May 16).

The No. 88 Chevrolet Camaro driver’s deal became public a day before NASCAR’s return to racing at Darlington Raceway. The season was put on pause for over two months due to the coronavirus pandemic.

Bowman is in his third full-time Cup Series season at Hendrick Motorsports, earning two victories and two playoff bids. He scored his first win in thrilling fashion at Chicagoland Speedway last June, propelling him to aa 12th-place finish in the final point standings.

Then, in the third race of the 2020 season, Bowman dominated at Auto Club Speedway, leading 110 of 200 laps en route to the win. He currently sits fourth in the Cup standings behind HMS teammate Chase Elliott.

I’m so appreciative to everyone @TeamHendrick for their support, especially Mr. Hendrick, @JeffGordonWeb, Marshall Carlson, Jeff Andrews, @Ives_Greg and so many others. NASCAR is a team sport and we’ve got the best at HMS.

Hendrick Motorsports followed up with a tweet of their own supporting Bowman.

And he’s just getting started. Proud to have you on our team! https://t.co/KSkMfpqE2O

Bowman, 27, has two victories, two poles, and 11 top-five finishes in 157 career Cup starts. He took over the No. 88 from a retiring Dale Earnhardt Jr. at the conclusion of the 2017 season.

The move comes less than a month after Bowman claimed both sides had put the contract to the side while waiting out the COVID-19 pandemic.

“I guess everything is kind of put on hold right now,” Bowman said April 26 after winning the eNASCAR Pro Invitational Series race at Talladega. “You know, obviously I want to be at HMS for a long time, but I guess we’ll just have to wait and see. Hopefully, they’re working on it, for sure.”

Great News! I think that Bowman will be in the final four this year. My only surprise is the short duration of the extension. Probably sponsor related as sponsor dollars are dicey industry wide given the Covid situation for this season and maybe next. As reported elsewhere, there is speculation that Bowman and crew might switch over to the fully funded 48 car next year and if Alex does well, a new multi-year deal might be in the cards.