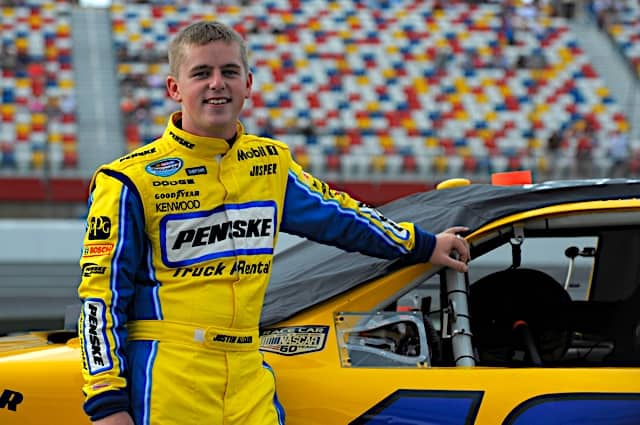 When it comes to the ARCA Menards Series, there have been seasons where future stars are born and brought into the picture. In 2008, Justin Allgaier earned the ARCA Re/Max Series championship battling the likes of Frank Kimmel, Matt Carter, Ricky Stenhouse Jr., and Scott Speed. The 2008 season saw many drivers who made it to the big show and others who haven’t been heard from in a very long time.

Driving for his father Mike, Justin Allgaier stated his case for the big time. In, what would become his final ARCA season, Allgaier kept it consistent and earned six career victories including 3-in-a-row to finish the season. During this season, Allgaier only finished outside the top-15 five times. The consistency that Allgaier placed in the picture was in large part a reason for him winning the championship.

Before this season, Allgaier only had two career victories under his belt. Right out of the bat at Daytona, Allgaier pushed through and earned a second-place finish. He finished second to his teammate now, Michael Annett. With that momentum from Daytona, he went on to win the following race at Salem.

His runs wouldn’t stop there as he finished second at Iowa. Despite having three straight finishes outside the top-20, he rebounded and finished fourth and fifth at Toledo and Pocono. At Michigan, he would finish 37th and that would be the last time Allgaier would finish outside the top-30 in his ARCA career.

He went on to win at Cayuga International Speedway and begin his push towards his first, and only, ARCA Menards Series championship. Allgaier would go on to finish third at Kentucky, second at Berlin, and win at Pocono.

Though being a rival of Venturini Motorsports most of the time, Allgaier made a start with Venturini at Nashville Superspeedway. Entering Nashville, Allgaier sat 190 points behind points leader Scott Speed. With five laps remaining, it looked as if Allgaier would earn the victory but when he got turned by Sean Caisse he was knocked out of contention. Allgaier, showing the real driver he was, rushed his way up to eighth on the final restart.

Billy Venturini spoke about it following the race praising Allgaier.

Allgaier would finish outside the top-10 just once in the final seven races. Allgaier would earn back-to-back fourth-place finishes and entering New Jersey Motorsports Park, Allgaier was fifth in ARCA Menards Series points. Allgaier had a fast car during the race and was able to hold off Colin Braun, who was running for Ricky Stenhouse Jr. late. Rain ultimately forced ARCA to call the race giving Allgaier the victory and with Speed finishing eighth, the points battle tightened.

At Talladega, it was three drivers battling for the championship. Eddie Sharp, owner of Speed’s entry stated that he couldn’t wait for this race to move to the spring and not so close to the end of the season. Allgaier was 220 points out of the points lead. With 26 laps to go, Speed would nail the outside wall and would go behind the wall. Stenhouse Jr., who was involved in an accident earlier in the race would rush to jump back into his car and go out and attempt to get the points lead. Allgaier would push Joey Logano to the lead before making the pass on him on the backstretch. He’d hold them off earning his seventh career victory.

After one of the most controversial moments in ARCA Menards Series history that we’ll talk about later on, Allgaier and Frank Kimmel were all that was left in the title fight. Allgaier held off Matt Carter in the end to earn his sixth victory of 2008 and the ARCA Menards Series championship.

The following season, Allgaier would move from ARCA up to Xfinity racing with Penske Racing where he would tally three top-five’s, 12 top-10’s, and one pole. Allgaier would earn his first career victory at Bristol in 2010. He’d make his Cup Series debut at Chicago in 2013 with HScott Motorsports before running a full-season in 2014 and 2015.

During the 2008 season, Frank Kimmel wasn’t as strong as had been but he struck right when he needed to. Kimmel won at the two dirt tracks of Springfield and DuQuoin along with a win in the second Salem event. With Scott Speed and Ricky Stenhouse Jr. taking each other out in the season finale at Toledo, Kimmel was just waiting to strike and take his 10th ARCA Menards Series championship but never had the chance as Allgaier earned the victory and the championship.

The beginning of Kimmels 2008 looked strong finishing 5th (Daytona), 4th (Salem), and 3rd (Iowa) but then he had four straight finishes 10th or worse. The remainder of the season was a roller coaster with four straight top-fives then two finishes outside the top-15. The win at Salem set up a hard run for the championship finishing 10th, 6th, and 3rd in the final races of the 2008 season.

Kimmel would finish in the top-five in points every season leading into his final championship in 2013. He would retire following the 2016 season.

It was Scott Speed vs. Ricky Stenhouse Jr. for the championship at Toledo with Justin Allgaier and Frank Kimmel being supposed “long shots”. Early in the race, Speed was leading Stenhouse Jr. when the aggressive driving by Stenhouse Jr. came out. Stenhouse went to push Speed up the track and Speed nailed the outside wall.

Speed limped back out and made sure that Stenhouse Jr. wouldn’t win the championship that way turning him junking both cars to the point of needing repair. ARCA parked Speed while Stenhouse Jr.’s team made the repairs and he finished the race 25th, 69 laps down.

This would be the final career ARCA race for the two drivers as Stenhouse Jr. moved on to the Xfinity Series and Speed moved on to race in the NASCAR Cup Series with Red Bull Racing. After spending much of his career with Roush Fenway Racing, including his ARCA career, Stenhouse Jr. moved over to JTG-Daugherty Motorsports this season. Speed’s last season in NASCAR was in 2013 at Atlanta Motor Speedway with Leavine Family Racing.

Return of “The Rock”

Rockingham Speedway came off the NASCAR Cup Series schedule following the 2004 season. The track was ever popular for both the driver and the fan. So much so, ARCA made its return to “The Rock” as part of the 2008 season. A total of 52 entries were filed while 50 cars took to the track.

Joey Logano would outright dominate the race lapping all but five cars. The field featured many of today’s drivers in the top-three series including Michael Annett, Austin Dillon, Mike Harmon, Norm Benning, Justin Marks, and Jeremy Clements. Logano would lead the most laps at 257 followed by Matt Hawkins, who led 25 laps.

Matt Carter had early success in the ARCA series finishing third in his second start at Salem. A week later, Carter would earn his first and only career ARCA pole at Iowa. He’d follow up that pole with a fourth-place finish in the race, a race won by Matt Hawkins. The first and only triumph of his career would come at Toledo in just his seventh start. The race would see Dexter Bean, Scott Speed, Andy Hanson, Ken Schrader, and Carter all would battle but Carer would come through holding off Patrick Sheltra by .115-seconds.

Carter would only have two finishes outside the top-25 and earn five top-five finishes to clinch the 2008 ARCA Menards Series Rookie of the Year award.

Since the 2008 season, Carter has made 45 starts in the Xfinity Series (best finish of 12th at Bristol in 2009). He hasn’t been seen in the series though since 2014 where he ran three races with MBM Motorsports.

Canton, Georiga native Matt Hawkins was able to hold off Justin Allgaier for his first career victory at Iowa Speedway. Hawkins led 12 laps en-route to his first and only ARCA Menards Series victory. During his five races, Hawkins showed he meant business. He finished outside the top-10 just one time through those races and that was due to an axle failure at Michigan. He finished 4th at Rockingham and Nashville and 6th at Kentucky.

It should be noted that his first career victory, came in his ARCA Menards Series debut.

Hawkins passed away on February 14th, 2009 after an incident involving an accidental gun discharge.