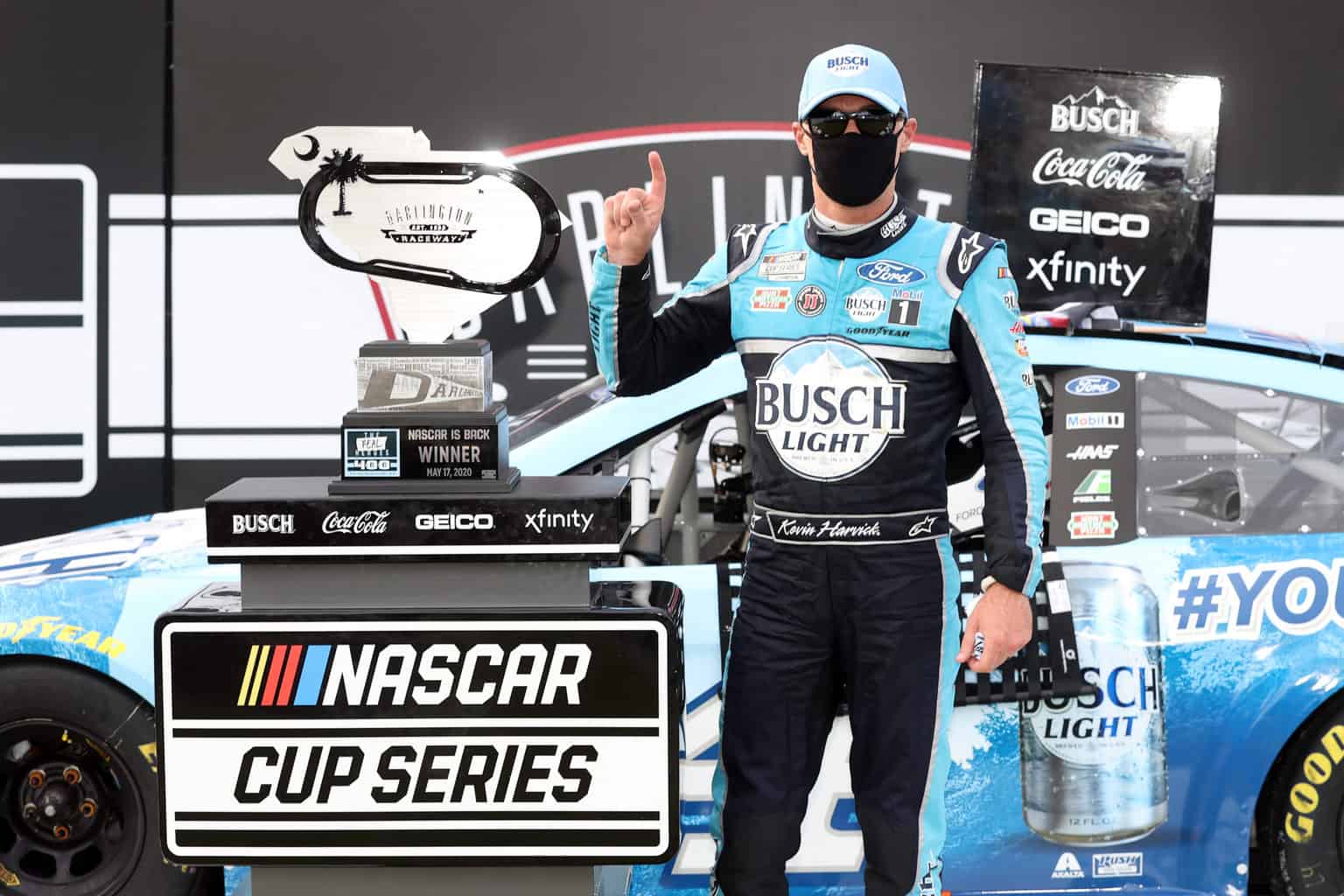 Kevin Harvick was never far from the lead on Sunday afternoon, cruising to victory in the Real Heroes 400 at Darlington Raceway.

The win was Harvick’s 50th in Cup Series competition, tying Junior Johnson and Ned Jarrett on the all-time list. It was the California native’s second at the track after winning there in 2014, a season that ended with Harvick also winning the championship.

Sunday’s race was NASCAR’s return to on-track action, the coronavirus pandemic putting the season on hold for more than two months.

Brad Keselowski led from the drop of the green flag, having drawn the pole in last week’s drawing for starting spots.

That green flag run only lasted half of the opening lap, as Ricky Stenhouse Jr. got sideways on the backstretch and hit the inside wall.

Once the race restarted, Keselowski set sail in the lead and Harvick gave chase, but couldn’t catch the No. 2 before the competition caution at lap 30. As mandated by NASCAR, the field was frozen before pitting – Keselowski retained the lead for the restart.

Hendrick Motorsports began a charge towards the front, with Alex Bowman taking the lead from Keselowski on lap 45. Bowman was followed by teammates Jimmie Johnson, who took second, and William Byron, who grabbed third as Keselowski continued to fade. Fellow Hendrick driver Chase Elliott also ran inside the top 10.

The 1-2-3 didn’t last long as Bowman began to drop back and Johnson took the lead on lap 82, setting his sights on the green-and-white checkered flag and just his third career stage victory.

Those hopes went up in smoke and sparks, though. Johnson made contact with Chris Buescher on the stage’s final lap, sending the No. 48 spinning into the inside wall on the backstretch. The crash ended Johnson’s day and gave the stage win to teammate Byron.

A round of pit stops and restart later, Byron’s day went south as he tagged the wall and spun, the ensuing repairs putting him several laps down. Another caution followed soon after as Daniel Suarez spun his No. 96 Chevrolet on the apron.

Harvick made his way to the lead and stayed out in front through the halfway point, but another yellow flag flew on lap 155. Denny Hamlin caught a piece of wall banner on his grille, using Clint Bowyer’s car as a buffer to rid the No. 11 of the debris.

However, Tyler Reddick was running just behind Hamlin, and the banner hooked itself into his front end. The aforementioned caution flew for the wall banner itself, which was coming apart because of Kyle Busch getting into that area of the wall.

Harvick lost the lead with about 10 laps to go in the stage – a Christopher Bell spin brought out the caution, sending the field to pit road. Harvick had issues during his stop, giving the lead back to Keselowski. Martin Truex Jr., who started 15th, suffered damage on the first lap and fell back to 30th, made his way back up through the field and restarted second.

Keselowski withstood a challenge from Truex to retain the lead, but Harvick took it back on a round of pit stops and stretched out his lead to almost three seconds with 50 laps remaining.

The field was reset with 41 laps remaining, a caution triggered by Ryan Newman’s spin in turn one. Darlington was Newman’s first race back after his violent crash at Daytona, the driver suffering a head injury and missing the next three races.

Harvick retained his lead after the ensuing pit stops, battling with Bowman for the lead on the restart. As Kyle Busch suffered a loose wheel and came to pit road, Harvick gapped Bowman and the field en route to winning the race.

“I want to thank all the people from NASCAR and the teams for letting us do what we do,” Harvick said. “It’s a pretty big honor to win 50 races in this deal.

Harvick will try to go back-to-back on Wednesday as the Cup Series returns to Darlington, with that race set to start shortly after 7:30 p.m.

I think the lack of fans got to kevin when he did the burnouts and no crowd noise. No cheering when he got out of car at start/finish line. The magnitude of the new normal was horrible. I was heart sick during the preface ceremonies. The picture of kevin masked alone in victory lane makes me sad. Seeing the drivers next to their cars without any family or friends masked was rough.

Onto the new normal.

The lack of fans was unnoticeable for me. Never cared about pre-race shows, roving TV reporters in the stands, burn outs or stupid questions in Victory Circle. Stenhouse Jr & Johnson wrecks were unforgivable. Who authorized covering the outside barrier with temporary advertising banners? I thought the event showcased how unnecessary all the emphasis on face masks and social distancing. Its necessary in the supermarket but not at the race track with no attendance. After all, are not all the NASCAR people, racers and crews Corona Virus free after being checked out? It seemed like Mike Joy & Fox wanted to look PC. I was disappointed to hear only two media people were allowed to report the race from the media tower. Races need more than two opinions.