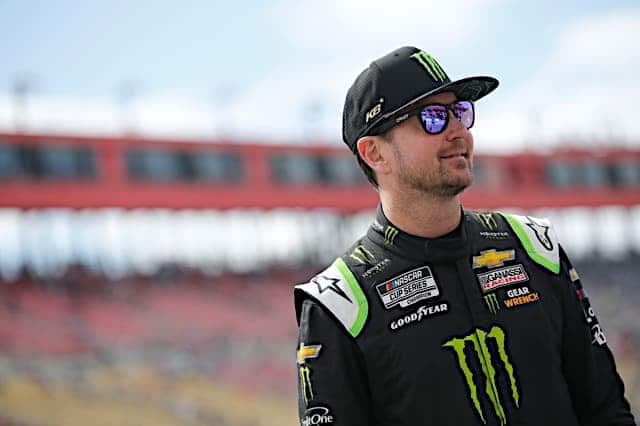 Kurt Busch tied his best finish of the season with a third-place effort at Darlington, NASCAR’s first race back amid the coronavirus pandemic.

Sunday afternoon’s Real Heroes 400 was won by former teammate Kevin Harvick, but Busch had a consistent race, running near the front for most of the day. Matt Kenseth, Busch’s teammate at Chip Ganassi Racing, finished 10th.

Sunday afternoon’s Real Heroes 400 was held without fans, but Busch said the feeling in the garage was overall positive.

“Today had a really good vibe all the way around and people were smart,” Busch said. “[They] had a good distance between each other and respect for what we had to do to perform.”

Busch worked his way up through the field after drawing a 22nd-place starting position, getting up to as high as second before falling to third, where his No. 1 Chevrolet Camaro stalled out and where he finished.

“We were a little tight to start the race,” Busch said, “and that pace that Kevin Harvick had for the first 10 laps was tough to beat. [But] to dance with the ‘Lady in Black,’ I’ll take the third-place finish. And it was great to be out there and to race 200 miles an hour, to feel G forces again and to have a day where I was out there working and being part of a team. And so again, just thanks to [crew chief] Matt McCall and everybody for making that adjustment.”

Despite the lack of spectators, Busch said the novelty of the situation provided an air of excitement.

“Just the electric atmosphere,” he said. “Again, something so new and something so uncharted that once we drop the green flag, you got to hone in and focus on Darlington… really a special time today around 3:30 to go get belted in and and do something we’ve never done as a sport.”

Busch wasn’t alone, though. The return to racing helped everyone in the garages – and everyone at home – forget about the pandemic for a while and get back to some semblance of normalcy.

“This was a great feeling to be able to have such a good car with a good team at Chip Ganassi Racing and to be out [there],” Busch said. “There was no fans, but yet I could feel them all the way through the television cameras [when I was] out there racing hard and just trying to put on a good show.

“It was awesome,” he added. “The feelings, the nerves, the anxiety, the excitement, knowing we were in uncharted territory. And you know, I didn’t know who spun, didn’t know who had trouble but everybody did a really good job settling in, even on the next few restarts, to race the racetrack. You have to do that here in Darlington, so I would call today a success, all the way around.”

Busch will try to better his third-place effort on Wednesday when the Cup Series returns to the egg-shaped oval in South Carolina.