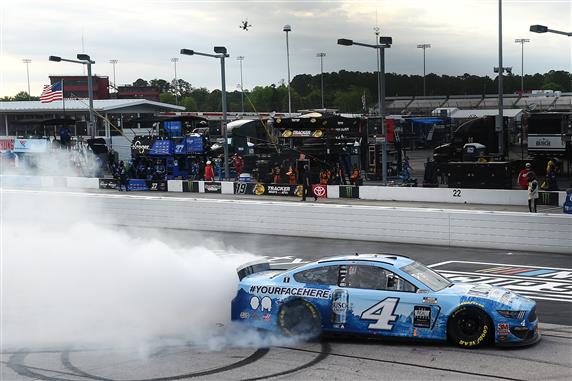 For the first time in nearly 50 years, NASCAR will have a scheduled mid-week race for its flagship Cup Series, with a 500-kilometer race at Darlington Raceway.

Once again, there will be no practice and no qualifying for the event. NASCAR has already determined the starting lineup for the race based off the finishing order for Sunday’s race, with the top-20 finishers in that race being inverted and the bottom half of the field lining up as they finished the previous race.

For example, Kevin Harvick won and Alex Bowman finished second. On Wednesday, Harvick will start in 20th, behind Bowman in 19th. Meanwhile, Ryan Preece got around Bubba Wallace in the closing laps to finish 20th. Preece will now begin the race from the pole position, while Wallace finished 21st and will start in 21st on Wednesday night.

Darlington is one of the toughest ovals in all of NASCAR. Built in 1950, the track’s layout was largely designed for cars to hit about 125 mph at the end of the straightaways. By comparison, William Byron’s average pole speed for last fall’s Southern 500 was 172.487 mph.

Originally, the racetrack was planned to be a more traditional oval with equal corners. What happened, however, is that the property owner did not want to disturb his minnow pond, so the track has an egg shape, creating a track where all four corners are completely unique. The pond still sits next to turn 4 to this day.

Also, with only 0.1 points awarded for each lap led by a driver, the need for a dominator is less important when building a winning lineup. The 228-lap race will have a total of 22.8 points up for grabs in this category. Take note when building your roster and focus on mid-pack competitors who can climb up toward the front on race day.

Sunday’s race winner is actually cheaper than he was last week and will be bringing the exact same car back to the track. Combine that with Harvick probably getting a nice position differential bonus due to starting 20th, and it’s hard not to take him again.

Hamlin’s fifth on Sunday is just the latest item on his resume at the track “too tough to tame.” Hamlin has a few racetracks he’s great on – Richmond Raceway, Martinsville Speedway, Pocono Raceway – but arguably his best track is Darlington.

Of the Toyota drivers, Hamlin was the best of the race and also the most well-rounded, being one of only two with a top-10 average running position. Hamlin is a master at saving his tires, key both to his iRacing victories the past couple of months and his success at Darlington. If a long green-flag run breaks out, Hamlin is going to be very tough to beat on Wednesday.

One of the more heartbreaking stories out of Darlington was Johnson, who looked to be well on his way to his third career stage win before slipping off Chris Buescher‘s Ford on the backstretch of the final lap of stage one. Johnson went from leading the race to finishing 38th after not being able to continue the race.

When Johnson looks as good as he did, it’s tough not to go with him. Even though Johnson won’t have the same exact car for this second race, he and crew chief Cliff Daniels should be able to get their new Chevrolet to be just as quick. Starting from the back should also net Johnson a nice point differential bonus.

Don’t look at that average finish! Yes, Byron has an awful record at Darlington, but there’s always been something stupid that happens to him that takes away a decent finish. Byron took the baton from Johnson and won stage one, but blew a tire not long after and finished 35th. There was a case to be made before his incident that the No. 24 Chevrolet looked like a top-five car, and like Johnson, Byron should be back up near the front by the mid-race.

I don’t know who at FanDuel decided to price Nemechek at this tier, let alone at this price, yet here we are. The 22 year-old Cup rookie had a great race, walking away from “The Lady In Black” with a solid ninth in his very first Cup race there. Scooping Nemechek up saves on the budget enough to where I can have four big-budget drivers that have legitimate chances at winning the race, which is not very often seen in daily fantasy.