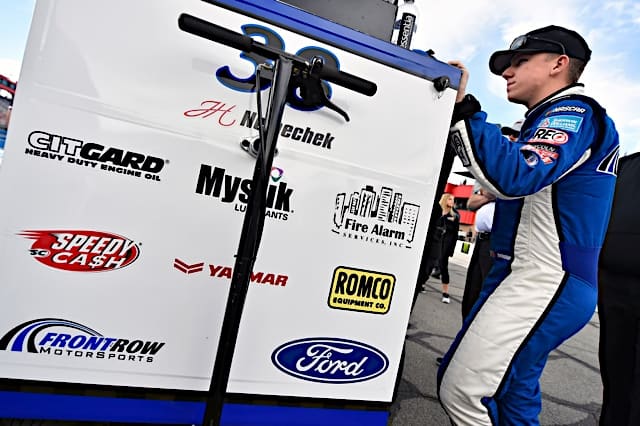 John Hunter Nemechek is a rookie, a fact that bears mentioning for two important reasons. First off, you may have forgotten his status since the season started what feels like a decade ago. Secondly, he didn’t look much like a rookie at Darlington Raceway on Sunday afternoon. The Front Row Motorsports driver tamed the Lady in Black en route to a ninth-place result.

Nemechek earned his first top-10 finish in the Cup Series in just his eighth start. For comparison purposes, Jimmie Johnson got his first top 10 in his sixth Cup race. Kyle Busch didn’t pick up his first until his ninth race. Whether Nemechek will continue his success in the same manner as Johnson or Busch is unknown, but it makes for quite the eye-opener.

There is a bevy of remarkable statistics attached to the son of 1992 Xfinity Series champion Joe Nemechek. First, he hasn’t finished lower than 27th in a Cup race. Secondly, he has outrun his more experienced teammates in five of his eight starts. But in all honesty, the most important stat is that he has finished all eight races, completing all but 10 laps. The most significant thing for a new driver is to gain experience, and Nemechek is making the most of his seat time.

After the race, Nemechek spoke of the impact that such a finish had on himself and his team, saying “It definitely means a lot to our team. I feel like we’ve kind of had speed all year and we’ve made our cars better during the off-season transitioning to Front Row Motorsports.

“It was a full team effort and we stayed on top of it, so it was definitely a great day and something to be proud of for us. I think that’s Front Row’s first top-10 finish on a non-superspeedway in almost four years, so it’s pretty amazing to have that accomplishment and hopefully we can continue to have the momentum roll our way. [But] it came down to the final restart and we had our car tuned up for the end. I was hoping we were gonna have a couple more laps. I think we could have got [Tyler] Reddick and Erik Jones, but, overall, a solid day.  I’m looking forward to going back to Darlington on Wednesday.”

One of the most improved teams over the last few seasons has been the No. 13 Germain Racing group with Ty Dillon at the wheel. Dillon wound up 19th at end of the first NASCAR race since early March.

With the latest solid effort on Sunday, Dillon has finished in the top 20 in 10 of his last 19 starts dating back to last summer. While Nemechek stole a lot of the underdog thunder at Darlington, Dillon certainly did a respectable job, and his run deserves to be recognized.

Since the NASCAR Xfinity Series doesn’t hit the track until Tuesday night, this category is still a big question mark.

In what will feel like a major case of deja vu, we will once again gather around our televisions to watch a race from Darlington on Wednesday evening. It will be interesting to see how Nemechek does, as this will go a long way in determining whether his surprise top 10 was a fluke or an indicator of upcoming success.

As for the Xfinity Series teams, keep an eye on Jeremy Clements. Clements is a homegrown short-track racer who can excel at a track that places a premium on handling the way success at Darlington does. Also watch for BJ McLeod, who finished in the top 20 last year at the 1.366-mile oval. McLeod attempted to run Sunday’s Cup event, but only lasted 13 laps before his engine failed. I anticipate a more successful outing the next time around.

I legit thought someone was grilling on the outside of turn 2 for a few laps ?? https://t.co/U9gCuBhwIX

Felt great to be back racing today! Finished up 33rd. The @MBMMotorsports guys made great changes all day long to better our @RoofClaimUS Toyota! We are going to clean the car up and be back at it again on Wednesday! pic.twitter.com/gpXpBae3Ye

.@JHNemechek may be a #SunocoRookie, but he has more than a few veteran drivers to lean on for advice during his first Cup Series season. See how he is approaching 2020 below! #FueledBySunoco pic.twitter.com/ZyEqjhkRA9