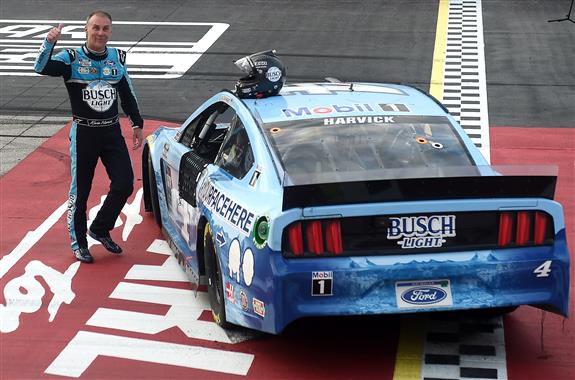 The Toyota 500k at Darlington Raceway is set to begin shortly after 6 p.m. ET on Wednesday, May 20, and will air on FOX Sports 1. The start time has been moved up due to expected weather in the area.

Drivers and teams may be a bit tired due to the short week after racing on Sunday (May 17). The NASCAR COVID-19 quarantine has the sport playing catchup after over two months’ worth of postponed events.

However, expect the drivers’ adrenaline to keep them going once they start competing again. This race will be a bit later in the day, so don’t expect to automatically have the same contenders. Instead, drivers and teams must react differently to a larger shift in temperature change. Certain cars will wind up as fast as they were Sunday… but their trip to the front won’t be easy.

That’s because NASCAR, continuing its no-qualifying rules under the pandemic, set the lineup for Wednesday’s race based on where the drivers finished on Sunday … with a twist. The top 20 have been inverted, a move which put Ryan Preece on the pole alongside Ty Dillon. Kevin Harvick, who won The Real Heroes 400, will begin this race in 20th. Drivers who finished 21st and below will remain where they finished in Wednesday’s lineup.

Before I move onto my picks, here’s the results from my Sunday lineup.

Note: The following is a sample DraftKings lineup; you can use the information to create your own lineup.

After Sunday’s race, how could I not play Harvick again? He led 159 laps en route to his first win of the 2020 season. It was also a milestone win for the No. 4 Stewart-Haas Racing driver: his 50th in the Cup Series. Additionally, he recorded 77 fastest laps, which boosted his DraftKings score even further.

Though starting back in 20th this time, the Closer should have no trouble flying to the front since he’ll be driving the same car that won. Don’t miss out.

It was a disappointing result for the seven-time Cup Series champion on Sunday. Johnson was leading the final lap of stage one when he hit Buescher’s left-rear quarter panel and turned left. Johnson’s car then hit the inside wall hard, and he had to retire from the race. However, he had a really fast car before that. Since Johnson begins in 37th Wednesday, he should produce a good DraftKings score thanks to position differential as long as he finishes well.

Busch earned his second podium and third top-10 of the season Sunday. Both Chip Ganassi Racing cars did well, as Busch’s new teammate Matt Kenseth finished 10th in his first NASCAR race back since 2018. Although Busch has never won at Darlington, he’s ended five of the past six events there inside the top 10. Last year, he led 94 laps before coming in seventh.

Busch starts 18th Wednesday, so he has place-differential upside on DraftKings. The veteran is also passionate about finally earning a win at one of the most iconic racetracks on the circuit.

You may be thinking, “Why this guy?!” Well, it is true Stenhouse crashed out on lap 1 and finished last on Sunday. However, that’s the perfect opportunity to use him in daily fantasy, providing he doesn’t make the same mistake as last time. His JTG Daugherty Racing cohort Preece was fairly quick in that race, making his way into the top 15 before ending in 20th. Stenhouse should have similar speed as Preece did, though they’re starting at opposite ends of the field.

Stenhouse also doesn’t have a good record at The Lady in Black, as he’s never earned a top-10 finish in eight starts. That history makes him a bit risky in daily fantasy. Still, he does have a 12th-place finish in 2018 after qualifying 25th. Since he’s coming from the rear, there’s nowhere left for Stenhouse to go but up (if he doesn’t wreck again). Get those place differential points working for you; even a top-15 finish would be enough of a boost to your roster.

Custer didn’t have as good a day as his SHR teammate Harvick; the rookie crossed the line 22nd. However, he does have a good chance to make up some spots with his 22nd starting position Wednesday night. Each one he nabs equals another bonus point to your DraftKings score. Also, this low price allows you to fit one or two top-tier drivers in your lineup.

There is one unique stat about Custer, though: he won last year’s NASCAR Xfinity Series race at Darlington without leading a lap. How? Well, Denny Hamlin crossed the line first, but his car failed post-race inspection and was disqualified. Custer was then declared the winner after the event.

Custer may be adjusting to his first year in Cup, but he does have good equipment with SHR. Add in one Darlington race under his belt and he should be able to perform much better Wednesday.

Wallace is here for two reasons: he’s inexpensive and is starting mid-pack. He’ll roll off the grid 21st, one spot ahead of Custer. Darlington isn’t his best track by any means, but he should hopefully earn enough DraftKings points to get you in the green.

I’d be remiss if I didn’t mention Wallace’s sixth-place finish at Las Vegas Motor Speedway earlier this season. That was his best result since getting a third at Indianapolis Motor Speedway last year. Wallace scored 59 DraftKings points, much of that from the 21 spots he acquired on that intermediate. It’s not entirely impossible for him to do well here, too, though fairly unlikely based on his track history (low- to mid-20s results).

Please note: Due to the COVID-19 pandemic and circumstances beyond our control, the free Frontstretch NASCAR DraftKings League has been canceled. We apologize for the inconvenience.