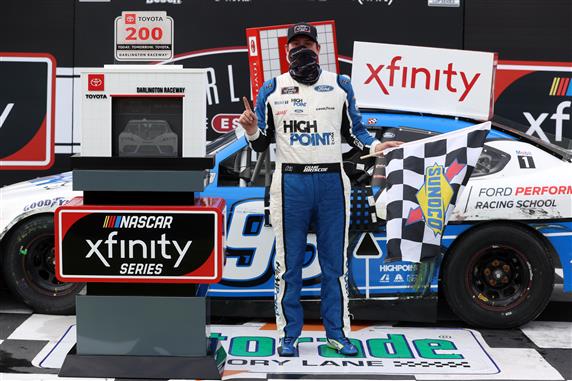 The first race for the NASCAR Xfinity Series since the COVID-19 pandemic began ended with an emotional victory for Chase Briscoe, who fending off Kyle Busch on the last lap to win the 2020 Toyota 200 at Darlington Raceway.

It’s Briscoe’s second win of this season and fourth of his career, but this victory was certainly his most emotional. Earlier in the week, Briscoe and his wife Marissa announced they had prematurely lost their first child during the pregnancy.

Upon climbing out of his No. 98 Stewart-Haas Racing Ford after winning the race, Briscoe was overcome with emotion.

“This is for my wife,” Briscoe said on the TV broadcast post-race. “This is the hardest week I’ve ever had to deal with. God is so good. Even when I took the lead with 50 to go, I was crying inside the racecar.

“Emotionally, I wasn’t there at all, but God is so glorious. This is more than a race win; this is the biggest day of my life after the toughest day of my life. Then to be able to beat the best there is so satisfying.”

Yesterday was the hardest day of my life. @MarissaBriscoe_ and I heard the worst news any soon to be parent could hear… That we wouldn’t be welcoming our daughter to the world on December 1st. I know God has a plan and we may not understand it but we seek Him and trust Him. pic.twitter.com/71uLSeQdsP

Briscoe took the lead on lap 96 and led 45 laps overall. He never gave up as he battled for the lead following a restart with less than 10 laps to go. Briscoe won the race, but Busch put up quite a fight as the two drivers raced to the checkered flag on the final lap.

He beat one of the best! Retweet to congratulate @ChaseBriscoe5 on his Darlington WIN.

Busch started in 26th place but rocketed through most of the field during the first stage. When the competition caution occurred on lap 15, he was already in fifth.

Busch came in fourth at the end of the first stage on lap 45. Noah Gragson, who won the season opener at Daytona International Speedway, won the first stage.

Busch became the race leader at the beginning of the second stage as he was the first driver off pit road. He took advantage and dominated it ahead of Justin Allgaier, Gragson, Briscoe and Michael Annett.

During the round of pit stops at the conclusion of the second stage, Busch again was the first driver off pit road. However, his perch atop the leaderboard ended swiftly. He was caught speeding on pit road by NASCAR and therefore dropped to the tail end of the lead lap. Busch climbed back to fifth, but his chances of winning appeared to have gone by the wayside as the laps wound down.

Meanwhile, Briscoe and Allgaier dueled for the lead before Annett spun on lap 132, bringing out the caution flag with 15 laps to go.

After that round of pit stops, Briscoe, Allgaier and Busch were the first three drivers off pit road.

On the restart, Briscoe held off a spirited challenge from Allgaier.

They're leaning on each other for the lead!!!@ChaseBriscoe5 escapes with the top spot, but @KyleBusch is in hot pursuit!

GET TO @FS1 FOR THE FINISH! pic.twitter.com/0ZwbhVqxq3

Busch raced into second and tried his best to win but came up 0.086-seconds shy of winning his first Xfinity Series race of this season.

“You always like to come out on top of that battle,” Busch said. “I knew being on the inside of [turn] 1 wasn’t good, but he had such a bad run off [turn] 4 I had no choice. I thought about blitzing the outside of [turns] 3 and 4, but I knew he would just out the bottom, slide up and plug it for me. I didn’t what to do, so I tried it, and it wasn’t enough. He was super loose, but I couldn’t get to him anyway.”

Rounding out the top five finishers were Allgaier, Austin Cindric and Gragson.

The Toyota 200 was postponed from its original race date of Tuesday, May 19, due to rain. The race again was rain-delayed, and the threat of inclement weather remained a possibility, but Briscoe won the race and leaves Darlington as the series points leader.

TWO Fords in the event and they finish 1 and 4. In NA$CAR that will NOT do. Rule changes are a-comin’.