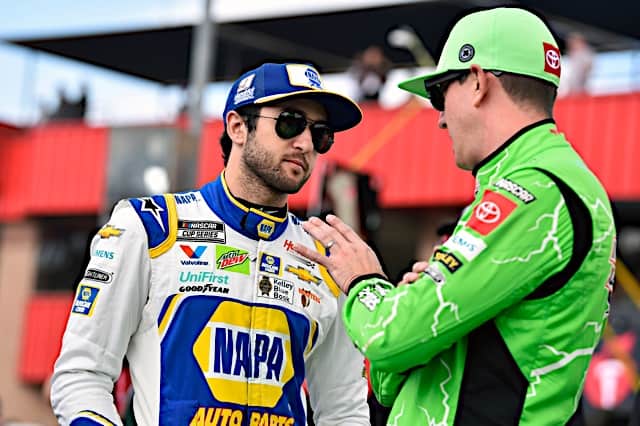 Kyle Busch and Chase Elliott were battling for second late in the NASCAR Cup Series Toyota 500. That was before contact sent Elliott’s No. 9 Chevrolet spinning into Darlington Raceway’s inside wall Wednesday night (May 20).

Elliott showed his displeasure by exiting his car, walking to the edge of the apron and making an obscene gesture towards Busch’s No. 18 as it went by.

The wreck became the night’s 11th and final caution, as downpours forced the field to pit road and officially ended the race with just 20 laps remaining. Busch’s Joe Gibbs Racing teammate Denny Hamlin won the race, his second of the year.

“There was no question, I know I made a mistake and just misjudged the gap,” Busch said in a post-race interview.

The top four cars – Hamlin, Elliott, Busch and Kevin Harvick – were running close together as they crossed the start/finish line, when Busch attempted to slide into the third-place gap between Elliott and Harvick. Appearing to misjudge the space on the track, Busch’s Toyota hooked Elliott’s Chevrolet and sent it spinning straight into the inside wall and out of the race.

“When we were racing there with the No. 11 and the No. 9, [I] had a run on [Elliott],” Busch said. “I knew he was there, and I knew I needed to get in line as quickly as I could … and in doing so, I watched him and his momentum that was going by me. Then, I tried to look up in the mirror to see where Harvick was to get in and I just misjudged it, made a mistake and clipped the No. 9 there and spun him into the wall.”

“I hate it for him and his guys,” Busch added. “I got too many friends over there on that team to do anything like that on purpose. I’ve raced Chase since he was a kid and never had any issues with him whatsoever, so it was just a bad mistake on my part and we’ll just have to deal with it later on.”

"I made a mistake and just misjudged the gap."- Kyle Busch on his incident with Chase Elliott pic.twitter.com/zH4ZLGKDz4

Asked if Elliott’s crew chief, Alan Gustafson, and the No. 9 team believed his account of what happened, Busch simply answered “go ask them.”

“They’re upset, they’re mad, I’m not just gonna fix it and we’re gonna go have ice cream tomorrow,” Busch said. “So obviously, they’re going to have to dwell on it. The repercussions of it, I’m sure I’m gonna have later on down the road.”

Neither Busch nor Elliott have won races so far in 2020. The 2019 series champion finished 26th in Sunday’s return to action from the coronavirus stoppage, while Elliott came home fourth. As for Wednesday night’s race, Busch finished second and Elliott 38th.

Gustafson was asked if Busch’s explanation “calmed the waters” at all.

“No,” Gustafson said. “Ultimately, he made a mistake, and I get it. I don’t think he intentionally wrecked us, but you just get tired of coming out on the wrong end of those deals too often.”

“… I certainly feel like we were in position to win that race,” he said, “and Denny was in trouble on old tires and we were going to clear Kyle obviously, so no, you get tired of getting run over like that, and his explanation I’m sure is accurate. But it doesn’t change that all these guys worked their tails off on this NAPA Chevy. Ultimately, they deserved to win the race.”

The Cup Series will return to action on Sunday, May 24 with the Coca-Cola 600 at Charlotte Motor Speedway. NASCAR’s longest race of the year will get underway shortly after 6 p.m. ET and also be covered by PRN.

If you believe that history is a good indicator of what may happen in the future, remember how Chase handled it when Hamlin did the same thing to him a couple of years ago.

There were 30 laps left. More than enough time for Chase to crash out himself. OBTW Jeff Gordon is just a Hendrick whore as an announcer.

Funny, I thought he spent most of his time last night talking up Truex, I would bet he spent more time talking about Truex than anyone or anything else. Even after it was clear that Truex wasn’t going to make that expected surge at the end of the race he wouldn’t let it go.

Even the best drivers make mistakes. Get over it! Poor Chase,, life can be so difficult even for the rich and famous. Sniff, cry….

Busch didn’t have to look in his mirror. His spotter would be telling him when he could get in line.

Looking at it from the side view it appears Busch unintentionally side drafted Chase and stalled him. Chase was a rocket off the corner and Harvick was a coming.