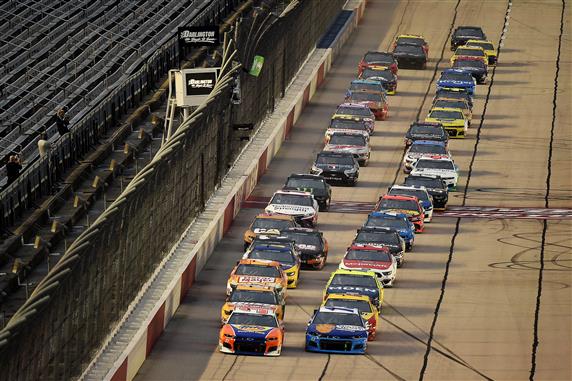 For the first time since 1984, the NASCAR Cup Series took over a Wednesday night, returning to Darlington Raceway for its second race in three days. What a doozy. Ryan Preece sat on the pole but Denny Hamlin emerged the race victor.

Coming out of the event, there was no shortage of storylines. Tempers flared, and there was plenty of badass on-track action and familiar faces running toward the front, specifically the winner.

Whenever NASCAR enters the gates at the track Too Tough To Tame, Denny Hamlin is among the drivers to beat. It doesn’t matter when you run the race: morning, afternoon, night, spring or fall, the No. 11 car is near the top of the scoring pylon.

Self-admittedly, Darlington is one of Hamlin’s best tracks on the circuit, and he proved that yet again on Wednesday (May 20).

Because Hamlin finished fifth in Sunday’s race at the same track, he began this race from 16th due to a top-20 invert. It didn’t matter though. By the end of the first stage, the No. 11 Toyota was eighth. Following stage two, he was seventh. But when the pay window opened, so did Hamlin’s run up the leaderboard.

Hamlin didn’t grab the lead until lap 197, going into what turned out to be the final 12 laps of the race. When most other drivers elected to pit during a caution for a Clint Bowyer spin, the No. 11 stayed out, not having a fresh set of tires in the pits. Luckily for Hamlin, soon after the race resumed, Kyle Busch and Chase Elliott were involved in an incident. By the time NASCAR could get the race restarted, rain trickled down the track.

With 20 laps to go, Hamlin was declared the victor, earning his third victory at Darlington and second of the 2020 season. He’s the 14th driver in history to have at least three wins at The Lady in Black.

Stats from tonight's Cup race at @TooToughToTame: @dennyhamlin scored his third win at Darlington, becoming the 14th driver to have a trio or more wins at the famed track. #NASCAR

While Hamlin is awfully good at Darlington, his Joe Gibbs Racing teammate Erik Jones isn’t too shabby himself.

In 117 career Cup starts, Jones has two victories: Daytona, July 2018 and last September at Darlington. To some, that was a surprise, but if you look at Jones’ numbers at the track, it shouldn’t be.

Since making the jump to Cup full-time in 2017, Jones has five starts at the track Too Tough To Tame, including the two races this week. In those five starts, Jones has five top-10 finishes (producing a worst finish of eighth, twice). Three of those have been top-five performances, including a Southern 500 victory.

Jones’ average finish, you ask? 5.4, the best in the series.

We had a fast @StanleyTools #Camry in that final stage. Brought it home P5. We'll regroup and get ready for 600 miles at Charlotte.#TeamTOYOTA #TeamStanley pic.twitter.com/lZQM1l0AzC

While Hamlin is a frontrunner to put on your fantasy racing teams at Darlington, Jones is quietly becoming quite the master of the track. Come Labor Day Weekend, don’t be surprised if the No. 20 team kicks off the playoffs with a victory at the same egg-shaped oval.

Ever hear of the sophomore slump? Ryan Preece is currently living it.

No, Preece didn’t have a multitude of success in his rookie campaign for JTG Daugherty Racing. Hell, he only had three top-10 finishes and an average finish of 23.1. But that seems like fantasyland compared to his first six races this year.

In the Daytona 500, Preece was involved in a crash, finishing 29th. The following week at Las Vegas Motor Speedway, the No. 37 car had an engine expire, finishing 37th. Over the next three races, he had runs of 30th, 18th and 20th. Things looked to be moving in the right direction.

Via the top-20 inversion from Sunday’s race, Preece started Wednesday night from the pole. Prior to that, his best starting position in any Cup race was 14th at the Charlotte Motor Speedway ROVAL last year. Optimism.

However, at the conclusion of the opening lap, Preece wasn’t even in the lead, as Ty Dillon got by. He backpedaled outside the top 10, and on lap 69, retired from the race with yet another engine failure.

Proud of @wtrentowens & @JTGRacing is an understatement. Started off loose, but that last stop he got the car one step closer to what we needless

Of course, mechanical failures, specifically under the hood, don’t typically fall on the driver. But through six events this season, Preece has an average finish of 28.8, sitting 32nd in the championship standings. It’s been so bad, he’s 35 points behind Ryan Newman, who missed three races. Matt Kenseth is only 12 markers behind after missing the first four events.

With the series heading to its longest race of the season this weekend at Charlotte Motor Speedway, Preece has to hope his car makes it the full 600 miles.