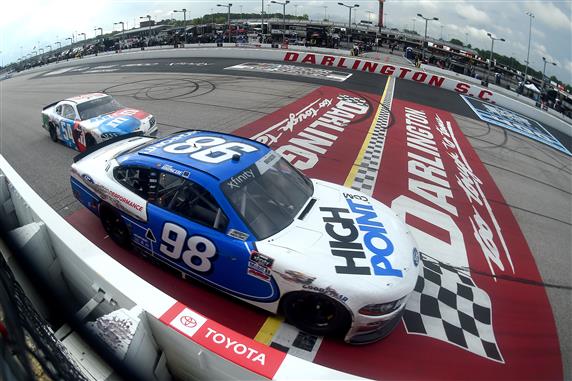 Seventy-five days. Two months and 14 days. That’s how much time had passed from the Xfinity Series’ last race at Phoenix Raceway to Thursday afternoon’s (May 21) thriller at Darlington Raceway.

After just one race back, there’s a lot to dig into.

On Monday (May 18), Chase Briscoe and his wife, Marissa, found out the gender of their first child. But while preparing for the first race back, originally scheduled for Tuesday evening, Briscoe was FaceTiming his wife for one of their 12-week checkup. Unfortunately, while using the Doppler machine, the nurse couldn’t find a heartbeat, reassuring the couple that’s not out of the ordinary.

Marissa ended up having an ultrasound, hoping to see their daughter at the 12-week mark. According to a Twitter post from Briscoe, the doctor came in and said, “Now for the heartbeat,” and there was a black screen, with an apologetic doctor.

The Briscoes had lost their baby girl.

Fast forward two days later. Briscoe, self-admittedly not being emotionally stable, drove the race of his life, beatin’ and bangin’ against Kyle Busch, arguably the best Xfinity Series driver of all time, on the final lap.

When the checkered flag flew, it was the No. 98 team that earned its second win of the season.

“This is for my wife,” Briscoe said. “This is the hardest week I’ve ever had to deal with. God is so good. Even when I took the lead with 50 [laps] to go, I was crying inside the racecar. Emotionally, I wasn’t there at all. … This is the biggest day of my life after the toughest day of my life.”

As I sit here in the rain at Darlington I just wanted to express how thankful and grateful @MarissaBriscoe_ and I are for all the tweets, texts, calls, and prayers. The amount of people who have reached out to us is incredible and we love you all.

Entering the season, Briscoe called it a make-or-break season. In his mind, he needed “eight or so wins” this year to make it in NASCAR beyond this season. Thus far, he’s off to a good start with two.

2. Is JR Motorsports back?

Via a random draw, JR Motorsports swept the front row for the Toyota 200. Polesitter Noah Gragson led the opening 46 laps of the race en route to the stage 1 win. Leading 46 laps in a single race is a new career-best for the Las Vegas native.

At one point with less than 20 laps to go, all four JRM cars were inside the top five, behind race leader Briscoe. Hell, Gragson, Michael Annett and Daniel Hemric were three-wide for third. Then Justin Allgaier got by the No. 98 car to take the lead, just before a late-race caution flew.

3. What happened to Joe Gibbs Racing?

Whenever Busch enters an Xfinity race, he’s the odds-on favorite for the victory. For a while, it looked like the No. 54 Toyota was going to be the one to beat, leading 45 laps.

However, at the end of the second stage, Busch was caught for speeding on pit road, .02 mph over the 50 mph speed limit. That sent the No. 54 to the rear.

Busch had no problem getting to the front. He drove his way up to the top five and then a caution flew with 15 laps to go. The No. 54 pit crew got Busch off pit road third, giving the 2009 series champion a shot at the victory. Ultimately, he finished second, though not for a lack of effort.

As for Xfinity regulars outside Briscoe, on the surface, they were nowhere to be found. For both Harrison Burton and Riley Herbst, it was their first time at the Lady in Black, as they were among 11 drivers in the field to have never raced at Darlington prior to Thursday.

Aside from Busch, Herbst was the highest JGR driver in the running order following the first stage in 12th (Burton was 13th, Brandon Jones 22nd). At the end of stage 2, Burton jumped to 11th, while Herbst dropped to 13th. Jones was up to 20th.

During the final stint of the race, Jones had a loose wheel, resulting in a 20th-place finish. Burton was able to finish ninth, Herbst dropping to 18th.

Entering Thursday, there was much chatter on whether the JGR Xfinity regulars could keep up their hot start to 2020, seeing both Burton and Jones claiming victories in the opening four races. It turns out it wasn’t a strong showing in the series’ first race back.

Don’t be alarmed, though, as both Burton and Herbst have been strong, adapting quickly to same racetracks they’d never seen prior to 2020.

Much like the Cup Series race on Wednesday, the return to racing for the Xfinity Series came with no practice or qualifying. Perfect, drop that rag!

Darlington is only a 200-mile race, so NASCAR threw a lengthy competition caution at lap 15, allowing teams to make two trips down pit road without losing positions. That, like a typical competition caution (blah), allowed teams to check tire wear because of a green racetrack as well as any suspension issues, since cars hadn’t been on track in over two months.

Coming into 2020, NASCAR had already limited practice sessions. The opening weekend of the year at Daytona International Speedway features two practices, with final practice being limited to 25 minutes. In the second race of the season at Las Vegas Motor Speedway, the series had one practice, totaling an hour and 20 minutes.

It’s been proven over the past week that teams don’t need a plethora of practice time to put on an entertaining show. Sure, the egg-shaped Darlington oval is different from most tracks on the schedule. But all things considered, it was a successful first weekend back for NASCAR.

A final lap that'll go down as one of the best at @TooToughToTame.@ChaseBriscoe5 holds off @KyleBusch in thrilling fashion and takes home an emotional Darlington win. pic.twitter.com/D2T12WM5z3

Maybe, just maybe, NASCAR will consider limiting practice sessions once the world gets back to normal.

Stating the obvious here, but unlike some other professional sports, NASCAR races on ovals cannot be contested in the rain. Simply can’t happen, especially when there’s a tropical storm.

Unfortunately, Mother Nature delayed Cup’s return on Wednesday by an hour-and-a-half. For Xfinity, it was delayed an additional 46 hours, after a scheduled Tuesday race.

Guess what’s on the forecast for Monday (May 25)? More precipitation. It’s possible the second Xfinity race back amid the COVID-19 pandemic is also delayed by rain.

Wife had an ectopic pregnancy so understand some of what the Briscoe’s are going through. My heart felt sympathies during this time. Chase way to fight for the win on those last 2 laps. Awesome job. Be well.

I feel for Chase and his family. To have to get that news through a video chat has to make it even more heartbreaking. What a great job by him to go out and win the race with all that emotional weight on his shoulders.
Shame I missed the race, everytime I tried to turn it on over the last 2 days it was under rain delay and I would turn the TV off and do something else. What an exciting finish there.

I agree with the practice time, they have so much data through races and simulators that there really isn’t much of a need for it.