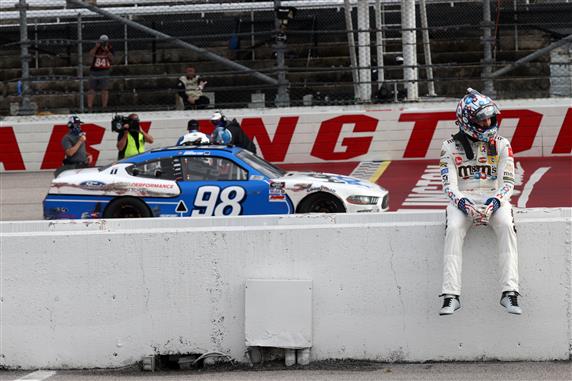 After the NASCAR Cup Series got back to action in thrilling fashion with its twin races last weekend and Wednesday (May 20), and after enduring persistent rainstorms that pushed race day back to Thursday afternoon (May 21), the Xfinity Series finally ended its own 75-day drought without racing and was able to resume their season in front of a sold-out invisible crowd at Darlington Raceway.

An emotional Chase Briscoe was able to triumph over many challenges, both on and off the track, to pick up his fourth career victory, and quite possibly the one that he’s bound to remember the most for years to come.

Briscoe, along with his wife Marissa, were struck with the type of news that no soon-to-be parent wants to hear: that they had lost their unborn child, not long after publicly announcing their pregnancy.

But Briscoe still had a job to do. He soldiered on, fighting back tears inside the racecar, showing every ounce of determination he could muster.

With 50 laps to go, Briscoe found himself in the lead for the first time. But the battle was only beginning. Briscoe had to hold off challenges for the lead from Justin Allgaier, and then from Kyle Busch, from the final restart onward. Busch’s No. 54 Toyota Supra steadily closed in on Briscoe, and the two drivers fought hard at the white flag. But Briscoe was able to edge ahead by 0.086 seconds at the line to post a remarkable victory over one of the all-time greats.

For Briscoe to deal with every high and low that he faced this week, and to still be able to hold off a 96-time race winner and former series champion right down to the final lap, signifies just how special the win is for him.

The amount of emotion he displayed as he exited his car is reminiscent of other NASCAR wins that have emotional undertones, such as Lake Speed’s first and only Cup win at Darlington in 1988, Jamie McMurray’s win in the 2010 Daytona 500 or Denny Hamlin’s win at Pocono Raceway in 2009 after losing his grandmother that same week.

A boost of confidence, as well as emotional healing, couldn’t have come at a better time for the 25-year-old. And he sure could use it to his advantage when the series races at Charlotte Motor Speedway in a few days.

Busch came up one position short to Alex Bowman at Auto Club Speedway in the Cup Series. He was passed late by Brandon Jones in the Xfinity Series at Phoenix. He finished second to teammate Hamlin under controversial circumstances last night.

And he tried with all his might to beat Briscoe. But still no victory has come up yet so far for him this season in the Xfinity or Cup series.

Busch has a history of not being a friend of finishing runner-up in a race. Today’s result marks Busch’s 54th runner-up finish in an Xfinity race — ironic, given his car number.

The un-tameable nature of the Track Too Tough to Tame earns a spot in the ugly category for this week. Even though just one caution occurred for an on-track incident, many drivers all throughout the field still received their own Darlington stripe in some way or another before the day was done.

The place has and still lives up to all the nicknames it has received, and NASCAR picked quite a beast of a track to return to after its months-long break.

“Emotionally, I wasn’t there at all, but God is so glorious. This is more than a race win; this is the biggest day of my life after the toughest day of my life. Then to be able to beat the best there is so satisfying” – Chase Briscoe

The next race on the Xfinity calendar is the running of the Alsco 300 at Charlotte Motor Speedway on Monday, May 25. It will be the second of a four-day stretch for NASCAR’s three national series at the track. The green flag is scheduled for 7:30 p.m. ET, and the event will be televised on Fox Sports 1.

Chase did great. Wonderful ending. Prayers for he and his wife during this sad time and difficult time.

chase drove the wheels off that car.

my heart hurts for him and his wife. their faith will heal them.