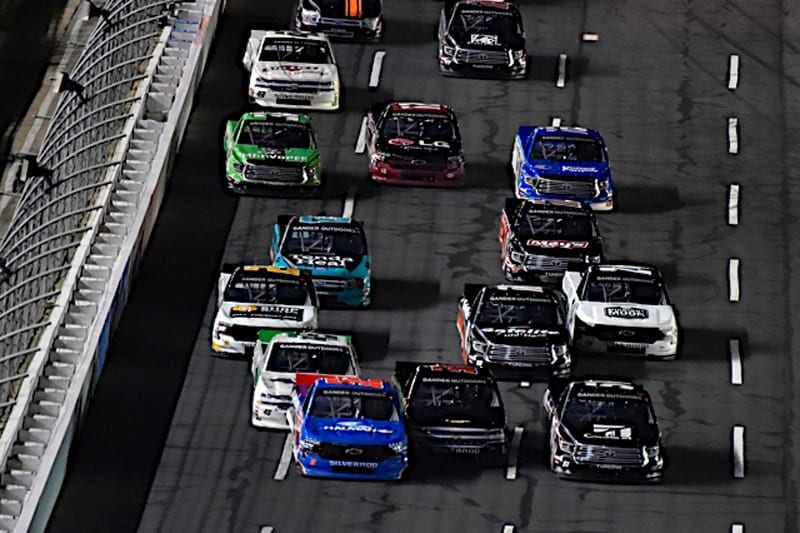 For the first time since February, the NASCAR Gander Outdoors Truck Series will be hitting the track for the North Carolina Education Lottery 200 (May 26).

John Hunter Nemechek and NEMCO Motorsports will be in the field after skipping the last event at Las Vegas Motor Speedway. Nemechek will pilot the No. 8 Ford.

Fellow NASCAR Cup Series competitor Chase Elliott will also drop down to the Truck Series at Charlotte. He will compete in the No 24 Chevrolet, a fifth truck for GMS Racing.

Like Nemechek, Bryan Dauzat will return to the series after skipping Las Vegas. Dauzat will pilot the No. 28 for FDNY Motorsports while United States Navy reservist Jesse Iwuji will jump into the No. 33 entry for Reaume Brothers Racing.

Niece Motorsports expands its lineup to include four entries. Full-time NASCAR Xfinity Series driver Ross Chastain will pilot the new No. 42 entry. Garrett Smithley will wheel the No. 40 Chevrolet while Natalie Decker returns to the seat of the No. 44.

Clay Greenfield returns to the series to pilot the No. 68 entry. He will have legendary crew chief Jeff Hammond calling the shots.

Finally, Kyle Busch will be back behind the wheel of his No. 51 Toyota for Kyle Busch Motorsports. After a bounty was declared by fellow driver Kevin Harvick, Cup drivers Nemechek, Elliott, Smithley and Timmy Hill, driver of the No. 56 Chevrolet, will try to win and beat Busch to claim the bounty.

Erik Jones was initially on the list of bounty hunters, but he will not race due to a lack of owner points from his No. 5 Wauters Motorsports team. Joining Jones of those who have been barred from competing are Tim Viens, Norm Benning, Trey Hutchens, Bryant Barnhill, Dawson Cram and Parker Kligerman.

The drop of the green flag for the North Carolina Education Lottery 200 is scheduled for Tuesday, May 26 at 8:15 p.m. ET. TV coverage will be on Fox Sports 1.

” 0 trucks will take the green flag at Charlotte Motor Speedway.”

Won’t be much of an event, but better than some.