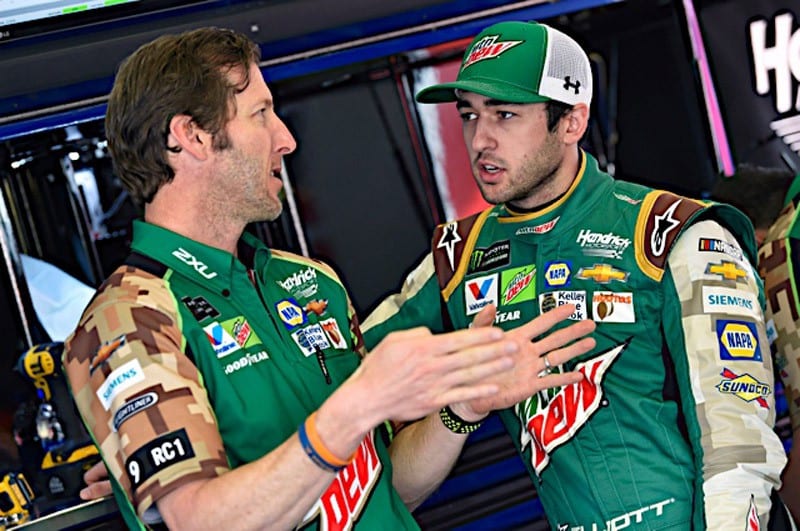 What’s next for Chase Briscoe?

One of the best finishes I’ve ever seen occurred in the rain delayed NASCAR Xfinity Series race at Darlington Raceway this week.

The first race for the series in over two months, the finish was a classic duel between Kyle Busch and Chase Briscoe.

A final lap that'll go down as one of the best at @TooToughToTame.@ChaseBriscoe5 holds off @KyleBusch in thrilling fashion and takes home an emotional Darlington win. pic.twitter.com/D2T12WM5z3

Briscoe emerged victorious in an emotional race for the young driver; it had just been two days after Briscoe had been told some truly awful news.

While the race wasn’t televised, it was in some ways comparable to the 1961 Rebel 300. There, the Babe Ruth of NASCAR, Curtis Turner, was beaten in a great late-race duel by young Fred Lorenzen. While Turner already had a Hall of Fame career, it was just Lorenzen’s second win at the now NASCAR Cup Series level and first on a big speedway. Lorenzen became an overnight sensation, and while “The Golden Boy” didn’t have a very long career, his success in his limited amount of starts in the big races and general stardom was enough to earn him a stand in Charlotte.

This finish may not have been as crazy as the descriptions, nor was it as good a Darlington finish as Ricky Craven–Kurt Busch in 2003. But the emotions of the circumstances involved and how the finish played into the night before (There was definitely something in the back of my head saying that Kyle would dump him) make it a much better story than just “close finish” or just “youngster beating legend.”

While obviously I don’t have the gift of hindsight as to whether this will be an apt comparison, there’s definitely a chance that it may end up being so.

Briscoe is going to be a big contender this year for the NXS championship, no question about it now. The 25-year-old has a 19-point lead and has rocketed to two wins in five races. If Briscoe can maintain this dominance throughout this year, there’s no question that he’s going to be a Cup driver next year. It would just be a question of if it’s with Stewart-Haas Racing or somewhere else.

What will the next week’s worth of racing look like?

NASCAR is about to have a crazy four-day stretch.

The Coca-Cola 600, one of the three biggest races of the year, will be running on its traditional date and time, Memorial Day Sunday night. The longest race of the year will be the first race over the 400-mile mark since the mid-February Daytona 500, which is crazy to think about from a scheduling perspective. But the entire world is crazy right now.

Denny Hamlin has the be the key favorite for this race. Yes, Toyota has definitely been a tick off this year looking past the race winner list. But Hamlin’s win at Darlington, rain or shine, had to be a huge momentum boost for this team. More importantly, Hamlin will have the best pit stall on Sunday as a virtue of winning said race.

It will be very interesting to see what the TV ratings will be for the 600. Last weekend’s Cup race at Darlington had a big rating, but in all honesty, it was a bit of a disappointment. I figured a good over/under for the race was 7.5 million people, so over 6.25 million wasn’t what I had in mind.

Following that will be a 300-mile NXS race on Memorial Day.  Then on Tuesday night, the sleeping giant that is the NASCAR Truck Series awakens, with Chase Elliott chasing after Busch’s head for both money and REVENGE. Trust FOX on this one, the two are totally going to go after each other here.

Then, on Wednesday, the last scheduled mid-week race for a couple of weeks will happen with the Cup cars returning to Charlotte. In comparison to Sunday, they over-performed this past Wednesday in ratings: my over/under was 1.4 million viewers, and they scored a little north of 2.0 million.

The reality of weeknight races is very simple. They are a very good concept; this past Wednesday’s Cup race was a success and was going to end before it started to drag. However, NASCAR fan demographics simply are not kind to weeknight racing.

The highest-rated shows every night are generally “news” shows like Hannity, Tucker Carlson Tonight, The Ingram Angle, etc. Many NASCAR fans are old and white, the same demographic of people that tune into those “news” shows in huge numbers. And from April to November in a sane year, weeknight NASCAR would have to contend with baseball, which is a double-whammy because baseball fans are also old and white.

While midweek races work and can be a lot of fun, it just doesn’t make sense from a business perspective in normal times. Would FOX really get its full value out of NASCAR by having it compete against its own “news” shows and another sports property it has a huge stake in, baseball? Only if it can develop an audience of 18-49 year-olds on a weeknight, and that’s a much easier task to say than to do.

So… Chase Elliott versus Kyle Busch in 100 words?

It’s fairly obvious at this point that Busch and Elliott are going to make up. Plain as day to see that Busch simply thought he was clear and made a simple mistake, because if they had gone back to green after that wreck, he’s probably not a factor with that body damage. What’s more is that people have forgotten that Busch and Elliott’s crew chief Alan Gustafson had a lot of success together at Hendrick Motorsports and both have very obvious respect for each other. And yet, nothing written will stop “THEY HAVE A HISTORY!” for the next five years.

Are control cones a good id- yes, they are.

It’s time for a choose cone. @TooToughToTame is the perfect place to try it. The bottom is at a disadvantage this will create drama and allow us to decide our fate. Paint something on the track before the start finish line. One to go we choose our destiny.

The control cone is such a common sense rule change that it’s mind blowing NASCAR hasn’t even tried it out yet at an All-Star Race.

It’s easy to show, hard to explain. Basically, drivers can choose which lane they restart in based off of their current running order, not the current system where only the leader may choose where they and second start at.

So, for instance, let’s say Landon Cassill is about to restart seventh at Darlington, and the six drivers ahead of him choose the preferred lane, the outside. Cassill can choose to either start behind them as the seventh car on the outside, or take a gamble and be the first car on the inside.

This would eliminate the games played on pit road. I don’t know how many drivers I’ve seen brake check and almost wreck half the field on pit road at certain tracks because they want to be on the inside on the ensuing restart, not the outside or vice-versa. Under this system, that junk is eliminated and drivers simply have to try to be out of the pits as fast as possible under caution.

It’s such an obvious thing to implement, and Dillon’s tweet led to so many people in the industry publicly saying yes, that NASCAR would be crazy not to either address this or at least experiment with the proposed rule.

I go to Bowman Gray quite often and you can feel and hear the excitement in the crowd when the officials place the cone on the track, especially in the closing laps. I think its definitely worth trying in Cup. It doesn’t create “Fake Drama” like some of the other gimmicks do such as the field inversion at the start of the race.

I agree that NASCAR should allow teams to chose which lane they want to restart in. It is counter intuitive for the guy in 6th place to have an advantage over the guy in 3rd place. This should have been part of the rule change when they stopped having the lapped cars on the inside lane on restarts.