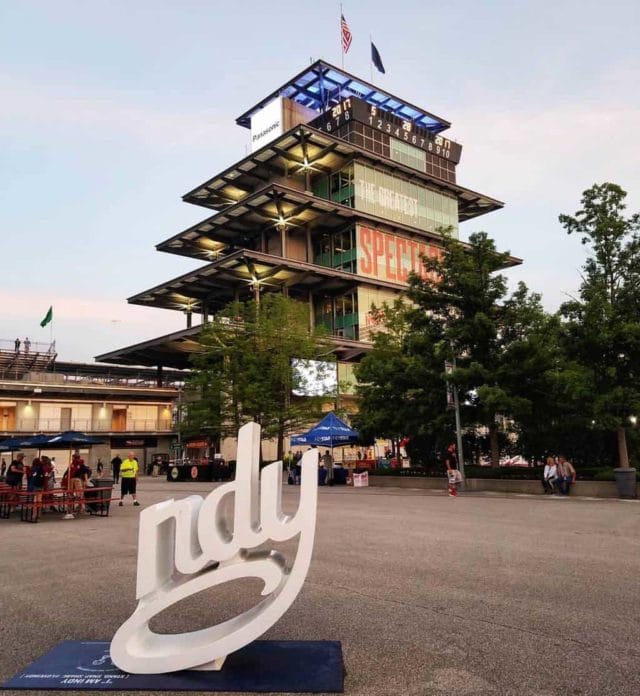 Indianapolis Motor Speedway is the most magical place to be during the Month of May.

How to describe the Speedway to someone who has never been there? You can spend your whole life watching the race on television and imagining it in your mind, but nothing quite compares to the moment you actually take the plunge and go. I thought nothing could compare.

And then I went for the full Month of May.

This year, I was planning on my second Month of May. The week I was planning on buying my plane tickets, the world shut down. Today, May 24, 2020, would have marked the 104th running of the event, but now we’re experiencing history. For the first time ever, the race will not be taking place in May. Instead, the Grand Prix will be a part of the lead-up to NASCAR’s Brickyard 400 on July 4. The Indy 500 will take place on August 23. There won’t be a month of anything this year, and there certainly hasn’t been a Month of May.

And I can’t lie—it hasn’t felt right to plod through May without IndyCar taking up residence at IMS. It’s going to be weird watching cars lumber through late-summer heat. It’s tough waking up on Memorial Day Sunday knowing I won’t have open-wheel to watch.

Next year, hopefully, we’ll be back in the usual swing of things, with two races, a tense qualifying weekend, and the slow build of practice. But until then, we’ll have to learn to appreciate this weird little slice of Indy 500 history and subsist off of love letters and fond memories.

That very first opening weekend rolls in quickly with machines of pure speed twisting through the winding road course seeking a glory they hope will last. The Grand Prix is like the appetizer to your favorite meal you’ve never had. The first year I went, my friends and I lined up on spectator mounds and got our first taste of a track that still didn’t quite seem real. The strange magic of the Month of May hit me that day: when I complimented someone on his Ronnie Peterson shirt, he stripped it off, handed it to me, and told me it was mine. Where else would that happen? Nowhere but IMS.

There’s a day of rest, and then, it begins. Hours of practice under the Indiana sunshine. The tension that lingers in that liminal space, the itchy hands just waiting to grip that wheel again. I showed up to the track every morning for gates open, braving the cool breeze of early spring Indiana mornings, just so I could watch the drivers and teams roll in. I wouldn’t leave at night until I was satisfied I wouldn’t be able to wring a single more ounce of enjoyment out of the day. There’s probably still a groove in Gasoline Alley where I wore a path with the laps I made of the garage.

You don’t know the Indy 500 until you show up for those practice days. The event itself is beyond comprehension—but to actually be there to watch drivers turn lap after lap of practice? To feel like you have the Speedway all to yourself? When you can sit anywhere you like, have first access to the drivers and team personnel who grow to learn your name over the course of the month, get to peep into garages to see who’s having a good day and who’s been struggling? When you congregate in the grandstands with a handful of your closest friends and the people you’ve met on the Internet? When you make friends with the Yellow Shirts who have volunteered their time to make this event the smoothest it can be?

You don’t know the 500 until you exist in this strange world where, for one month of the year, anything goes. I’ve purchased vintage glassware from fans who set up a little table in the street. I’ve driven through Speedway, Indiana just to look at the absurd race-themed decorations that adorn each and every house as if it were Christmas all over again. I’ve eaten macaroni and cheese for every meal of the day. I’ve had the privilege of letting a stranger watch over the car I’ve left parked in their lawn for hours on end—all for the grand sum of a $20 bill. I’ve celebrated my 21st birthday with members of the official IndyCar fan club. I’ve stayed out until the wee hours of the morning, only to roll up to the track early and shelter from a severe thunderstorm. Hell, I’ve even done gin shots out of a turkey baster. When at the Speedway…

You can live an entire life before the morning of the race ever hits, but when it does, you have to get there early to make sure you drink it all in. Arrive for the opening of the gates, find a spot to sit in the Pagoda Plaza, and watch the madness. Fans filter in, slowly at first, and then one moment you’ll look up and realize that you can’t extend an arm for fear of hitting someone. At some point, the Borg Warner will be wheeled by on its way to Victory Circle. The Gordon Pipers spiral around the track, no matter the heat. If a man walks by carrying a briefcase handcuffed to his body, then you’ve just seen the traditional post-race milk selections with your own two eyes. Celebrity after celebrity walks the red carpet rolled out in front of the Pagoda.

When the sun starts cresting in the sky, that’s when you know it’s time to find your seats. I’ve always ended up behind the end of the pit lane, close enough to see the action coming off turn 4 while still being able to watch the swarms of people roiling on the starting grid. “Back Home Again in Indiana” washes over you, leaving your skin prickling with goosebumps. The National Anthem. The command.

It’s amazing how quickly 500 miles can slip by when you’re too excited to sit down. Sometimes you even forget to go to the bathroom, to realize that you’re hungry. Weeks of practice have led to this exact moment, where 33 cars thunder around a 2.5-mile circuit.

And then, finally: it’s over. A month’s worth of festivities washes away in a splash of milk, rinsing the slate clean as all eyes turn to the following year, the next Month of May, the next chance at glory.

When you walk out of the Speedway, there’s no way you aren’t already planning your next trip.